Welcome to my 'Hub Pages' article on the Rolling Stones. I am indeed glad you clicked on the link that brought you right here. You are right on time! Read all about the way I viewed music at that time and how I related some events that followed in the music scene to the impact the Rolling Stones created with their emergence.

Read about my opinion on that famous rock band of yesterday and today! ... and most likely of tomorrow too! I am indeed pleased to meet you ... and so is someone else! ... ... ... Won't you guess his name?

Sympathy For The Devil

Another big bang occurred, and that was in the sixties. It sure did!

In the world of music of course! Mick Jagger, Brian Jones, Keith Richards, Bill Wyman, and Charlie Watts exploded into the music scene, with a new brand of music, shattering everything before and after ... blasting every other form of music out of the way!

This was probably an important turning point for music.

It was evident for a long period of time afterwords, and to an extent even now, how much of the pop music of yesterday got influenced in some way or the other by the music generated by the Rolling Stones.

Music, like everything else evolves, but just like many other things, the evolution process had been slow, until that period of time when the Rolling Stones emerged.

The Shock Rocks - It's Rock Music!

The shock caused by the sharp difference, the daring, and the concept that had been established previously in the mindset of many that music is for the sole purpose of soothing the soul, was now completely getting undone.

The phrase "Music Soothes The Soul" had created such an impact on many before our time that when popular beat music made its way into the lives of people, some felt it was not just right.

The soothing the soul concept now stands to be challenged because these new events actually brought out the fact that music certainly is multi faceted and can cater to many tastes and even create new ones.

Not merely as a relaxing agent. There are many sides to music. The new side, one previously unexplored has now been brought out into the open.

The definition will not change. It simply cannot. Only a classification will be added. Nothing can stand in the way when changes that are inevitable begin to show up.

Lyrics, And Music Of The Same Color - The Pioneers!

Rapid evolution of music I should say. Pulsating energy was modulated with music, creating a great new form, attractively different, and noticeable beyond description.

Being different means being new. They did not wait for the right time. In fact the Rolling Stones were a bit too early, nevertheless most welcome.

It was unexpected. It was not a question of not being prepared, it was just that we were too busy listening to the music that was available at that time.

Instantly every other form of music was abandoned by many, somewhat temporarily. Even their lyrics were noticeably dissimilar to that composed by other bands.

Not the same monotonous sentimental stuff which made up songs that were over promoted by the disk jockeys of that era.

The Rolling Stones have definitely arrived.

Strangely enough, that period of time was known as the Beatles' era.

The Beatles were riding high. They too had the distinction of getting called a rock and roll band.

The gentle rock sounds of the Beatles were demonstrated in tracks like "Dizzy Miss Lizzie," "Good Golly Miss Molly," and "I Saw Here Standing There."

The Beatles also did blues. However, on rock and roll they never screamed beyond their capacity.

The Sixties Was A Great Era For Music 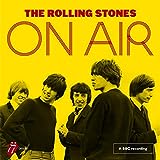 Being a kid at that time, music was discussed a lot during, before and after school hours.

All the other guys at school were also beginning to notice the Rolling stones. Noticing something is a great way to start indeed!

That's the way it was! The interest was snowballing. The differences were discussed at length. Some said the Rolling Stones were too loud, some guys said their lyrics were not clear at all due to the extra loudness of the back up.

At this very moment the Rolling Stones were already deeply involved in the scene, creating massive waves with their pungent energy-generating music!

Yes! Their music did generate energy instead of absorbing it!!!

The haunting and pungent tune accompanying the repetitions "I cant get no satisfaction" almost competing with the vocals, the avalanche effect in "Paint It Black, "psychedelic sounds from the track "She's A Rainbow," vibrant sounds in "Street Fighting Man," and many more tracks that were unique and totally dissimilar.

The Rolling Stones were different. That very difference that they demonstrated is just what made the difference.

Highly amplified guitar sounds played on loose strings, vocals to match ... that was the dynamic style of the Rolling Stones and that really set everything rolling.

Many bands around started following their style. They tried hard, and kept trying.

All their music was composed by Mick Jagger and Keith Richards.

Unfortunately Brian Jones died in 1969, drowned in his own swimming pool.

At that time he was not part of the band. Another guy by the name of Mick Taylor had replaced him.

"Paint It Black" was a top favorite of mine. So was "I Cant Get No Satisfaction," "Nineteenth Nervous Breakdown," "The Last Time," ... well the entire list!

They formed in the year 1962. At that time another member of the band, Ian Stewart, who is not so well known to Rolling Stones' fans, was their pianist.

Later on Ian Stewart took over the role of their road manager for a while.

Occasionally he also performed as their keyboard artist. Ronnie Wood joined the Stones much later on.

Having sold over two hundred million albums worldwide, the Rolling Stones are probably the longest surviving rock band on this planet.

Their more popular albums were Aftermath, Beggars Banquet, Let it Bleed, Voodoo Lounge, Through the Past Darkly, Emotional Rescue, and Exile on Main Street.

With all due respects to bands like Led Zeppelin, Jethro Tull, Deep Purple, Pink Floyd ... and the rest of the bands that made waves at that time, I still maintain that the Rolling Stones pioneered it all.

Infected By The Band

The Rolling Stones created a new base in music, re-invented rock and set everything ablaze.

They probably influenced every musician of that era who was involved or trying his hand at rock.

By just being themselves The Rolling Stones drew a lot of attention towards all other bands as well, that produced music that could fit into a category similar to theirs.

The attention received by the slow ballads, rhythm and blues music, sentimental hits, and even rock and roll music produced by the stars of the era now needed to be shared.

The starting point of the real rock era. The beginning of something new ... something unusual, real, un-copied ... something let loose ... inimitable ... cool ... really hot too.

Infected By The Brand

In the mid sixties music fans all over the world gradually got accustomed to hearing a very different form of music, something that they were not expecting, Never did they think this was possible. "Rock Music," a dynamic term has more examples to present.

Rules are not meant to be broken, although there were never any rules as such. Just the fact that the monotony of blues music gave rise to such suppositions.

Even today, in the world of music videos, CDs, free music downloads, with the radio not playing any significant part at all in introducing music like it did in that era, every trend in music gyrates noticeably towards yesterday's music, the Rolling Stones' era.

The era ushered in by the Rolling Stones started yesterday, active today, and will continue even tomorrow ... as long as there is music.

The Rolling Stones really did emerge ... generating megatons of energy. Right on! There was ... no turning back!

Tell Us What You Think

Do you think that the Rolling Stones are the best rock band ever?