IN THE GOOD OLD SUMMERTIME is a 1949 MGM musical by Robert Z. Leonard, which starred Judy Garland, Van Johnson and S.Z. Sakall. It is a romantic comedy to which Judy Garland adds a musical appeal, too.

This MGM Technicolor film is set in turn-of-the-century Chicago. The main stars are clerks in a music store who cannot get along from the very beginning. They both are fond, however, of their penpals whom they have never met.

The Hollywood Musical called In The Good Old Summertime, "one of the sweetest, most unpretentious entertainments of 1949." Besides featuring two amazing stars it also cameoed the incomparable Buster Keaton in his last film for MGM and the (at that time) unknown Liza Minnelli who made what is often called her movie debut. (Although apparently she appeared before this in Irving Berlin's 1948 Easter Parade.

Click here to order your copy of In the Good Old Summertime from Amazon.

"...a movie with gorgeous technicolour, many fine musical numbers delivered by Garland and a funny and touching story set against a beautiful "MGM" Christmas. Enjoy Judy Garland at the top of her talents in MGM's In The Good Old Summertime."

Fast Facts About In The Good Old Summertime

My Review in 100 Words or Less

IN THE GOOD OLD SUMMERTIME was a thoroughly enjoyable romantic comedy. I was totally surprised at Judy Garland's acting skills. (Don't be mad at me. I knew she was brilliant in The Wizard of Oz but there was so much more than just Garland to that film.) Anyway, Garland and Van Johnson were perfect together playing the comic moments exactly right plus we did get to see, once again, that Garland could really sing and dance. This movie was the perfect motion picture vehicle with which to showcase her comedic talents and her voice.

You will enjoy this movie if you love Judy Garland, a good storyline, comedies, love stories, moving Christmas scenes and classic movies.

In The Good Old Summertime Movie Reviews By The Experts

Amazon Customer Reviews of In The Good Old Summertime

IN THE GOOD OLD SUMMERTIME receives plenty of good reviews from Amazon customer reviews. Writer Simon Davis says that Judy Garland delivered a controlled and wistful performance and that the fact that this movie is set in a music shop gave plenty of opportunity to showcase her musical talents.

Another Movie Fan writing anonymously, calls this film a delightful romantic comedy and said that it was better than the remakes, You Got Mail or Little Shop Around The Corner.

Finally, Senior Rascal says this movie is overflowing with talent and that it is impossible to say that one individual stood out more than the others. He saw it when it was released in 1949 and has seen it several times since then, each time discovering something new.

You can read all of the Amazon customer reviews by clicking right here. 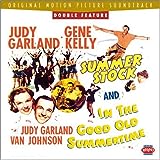 Shop Around the Corner

The Shop Around the Corner
Buy Now

There Are Three Movies Based On This Story

Despite it's summer-like title,

In The Good Old Summertime

is not a summer movie and

finishes with a feel-good Christmas

Have you see In The Good Old Summertime?