The King's Speech: A Movie Review

The King's Speech
Available on DVD for a great night's viewing.
Buy Now

The King's Speech [Blu-ray]
It's also available on Blu-ray for that greater quality viewing.
Buy Now

When the Fate of a Nation Hangs On the Spoken Word

British TV and movies get more viewing in my household than American media. I find, if I'm going to veer away from my preferred viewing genres, it will usually be because I've found a really good movie produced across the pond or which has a number of starring cast members from the UK. This is another of those movies which seduced me away from my normal preference for sci-fi, fantasy, mystery or occasionally suspense.

The King's Speech is at once a biography, drama and history. It is a snapshot of a period in time wherein a man, a leader -- a king -- must overcome a childhood affliction so that his voice might strengthen, comfort, and encourage a nation during a dire time in its past. In all this he was said by the Queen Mother to not have thought of himself at all.

The movie's title comes from the book by Mark Logue and co-written with Peter Conradi in which the story of Logue's grandfather's relationship with the Duke of York is told. The duke went on to become King George VI. This retelling of the importance of Lionel Logue's contribution to the royal family in this wartime segment of British history is well documented in the book, The King's Speech: How One Man Saved the British Monarchy."

Have you seen the movie?

King George VI: The Man Behind the King's Speech
Though the movie did justice to the subject, it never hurts to acquire a little background info, as with this movie about King George VI.
Buy Now

The Review - My Thoughts on the Movie

By introducing the tension and conflict early on in the movie, at the beginning really, the audience is sucked in with no recourse. It takes moxie to deliver a speech when one knows how difficult an experience it will be for both the listener and the speaker. One immediately feels a strong empathy for the then Duke of York, realizing the tremendous challenge his affliction presented.

As the story unfolds, the various contributing factors in his life with which he had to contend are revealed to further inform the viewer of the complexity of the issue. The problem wasn't the simple matter of a stammer. Enter Lionel Logue. You have to hand it to Elizabeth Bowes-Lyon, later to be known as the Queen Mother, she really understood what Tammy Wynette meant by Stand by Your Man. According to the movie, it was she, Elizabeth, who brought her husband and Logue together. This meeting led to a life-long friendship built on trust and respect and equality of a sort.

Together Lionel and the Duke of York (later King George VI) explored the contributing factors to the problematic stammer. Personal, physical and emotional aspects of this royal's life proved to be important to resolving the issue of the persistent stutter which had plagued most of his life. Unfortunately, the specter of childhood abuse reared its head as one of the contributing elements to George VI's inability to overcome his bete noir. The tendrils of sibling rivalry also proved an underlying cause. The physical issues were more easily remedied than the psychological ones.

As I watched the movie I rooted for the main character and wanted to reach out a hand of support as he rallied again and again to slay his dragon. This was not only about the delivery of a message to the masses. This movie was about the difficulties of verbal communication when so afflicted. Above all it's a movie about persistence, courage and fulfilling one's destiny. I recommend this movie highly and plan to add it to my collection of movies I watch over and over again.

Colin Firth's being cast in the starring role promises an excellent performance. Helena Bonham Carter is a favorite of mine from as far back as the Harry Potter series. Derek Jacobi's performance is as splendid as any part I've seen him in, especially the Brother Cadfael series. I welcome a re-acquaintance with Geoffrey Rush's acting, having appreciated him in Pirates of the Caribbean and his voice in "The Guardians of Ga'Hoole." An excellent cast in the lineup and a performance well delivered makes for a great movie to watch. 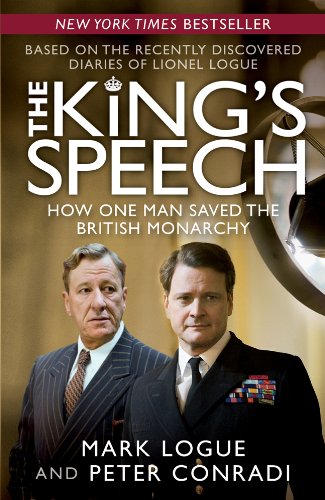 The King's Speech: How One Man Saved the British Monarchy
This book was written by the grandson of Lionel Logue's grandson. He discovered the papers and journals which had been written during his grandfather's treatment of the Duke of York for speech difficulties. This book is also available on Nook.
Buy Now

Things of Note from the Movie - Things That Caught My Attention

You know those niggling little questions and musings that hover at the back of one's mind. It's always rewarding to acknowledge them and give them a name. I've done so with several thoughts which crossed my mind as the movie unfolded.

Many of the things below are no-brainers for most of us. However, it's so easy to fall into expecting perfection beyond reason from leadership. It's can be all to simple to forget they are human. There are so many turns in the movie that my heart went out to the character, the king as played by Colin Firth, I felt it important to remind myself and other viewers of these traps so easily sprung in our minds.

"... to remind you of Muad'Dib. To remind you that all humans make mistakes, and that all leaders are but human."

— Leto, from the movie, 'Children of Dune'

The King's Speech is the first encounter with Mr. Firth I experienced. Well, not exactly my first. I did see,The English Patient, when it came out. I just didn't find Colin's performance all that riveting, but then, I was really focused on Ralph Fiennes, an actor I have really come to appreciate. Since viewing the movie that truly recommended Colin Firth to me as an actor to watch, I have seen him in Shakespeare in Love. On my list of others to watch in which he appears, Kingsman: The Secret Service and Genius.

Colin Firth hails from a family background of academics and missionaries. I'm all the more surprised by this because my experience, however limited, suggests that a few musicians and actors have entered this area of interest only after having determined their artistic efforts don't satisfy them any longer, and rarely ever do academics or those with a firm foundation in that area move into the acting arena. There is the exception of the lead guitarist for Queen, Brian May. He holds a PhD in astrophysics as well as continuing his music career. I guess my surprise comes from the understanding of how difficult it is to gain acceptance in the academic world, let alone respect and success. To have an opportunity for admission to said closed community and choose another area of endeavor is noteworthy in my book.

His success as an actor is illustrated by having received a Royal Television Society Best Actor award and more than one BAFTA nomination. Most appropriately, he received an Oscar for his role in The King's Speech.

Thanks for stopping by. Please feel free to leave a comment related to the hub, the movie or the book.