The Visitor -- A film about human connection in a disconnected world

The Visitor (2008) is an intelligent and beautifully-acted movie from director and screenwriter Tom McCarthy, and for which Richard Jenkins was nominated for an Oscar (Academy Award) for his performance as Walter Vale. The film blends universal themes of friendship, romance and acceptance which blossom between four very unique individuals, and places them within a context of a cold and soulless political system.

Although the film does have a political message, it is first and foremost a story of human connection. There is no preaching or moralising, instead the viewer is irresistibly drawn into the world of the characters as they first collide and then are pulled apart.

The tale becomes an interweaving of lives, that begins with one very disconnected individual: university professor and widower Walter Vale. Walter is in his early 60s with a grown son, and is clinging to the threads of a lost life with his late wife, a talented pianist. Everything around him has become a mere pretence.

Life has other plans for Walter, however. When he is sent, against his will, to NYU (New York University) to present as his own an academic paper that he didn't write, a shock awaits. He finds a young couple living in his Manhattan apartment. After the conflict of the first encounter settles, Walter takes a moment to reflect, stirred by the youth of Tarek (from Syria) and Zainab (from Senegal), who are perhaps the same age as his own son and the students in his lectures.

This moment is one that will change all of their lives.

The Visitor
In case you hadn't already guessed it, I highly recommend this movie. It will catch you up in the story and leave you wondering about the characters long after you turn the TV off. The political message is subtle, but all the same this is a film that may raise questions as you witness the effect of political policies on the lives of individuals. Ultimately a story about human connection, this is also a story that shows illegal immigrants as individual people, and not as statistics.
Buy Now

Walter Vale is a self-contained individual who has lost his passion for living and plays by the rules. He lives a solitary life, coming into contact with his fellow academics and his students but not connecting with them. At the beginning of the film, he refuses to budge on an assignment deadline when a student pleads 'emotional issues' as an excuse. Life for Walter is black and white, with no shades in-between.

He tries to recapture his deceased wife by learning to play her piano and by listening to her professional recording. It seems clear that his music lessons are more a chore than a joy to Walter, and he has had a succession of music teachers, finding none who can inspire that joy in him. As the film progresses, we learn to our surprise (and perhaps to his too) that Walter does indeed have the soul of a musician. He had simply not found the right instrument to express his true self. 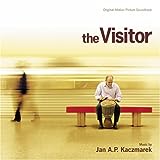 The Visitor
The music, composed by Jan Kaczmarek, is a driving force in The Visitor. This soundtrack is one I can listen to again and again. It effortlessly captures the changing emotions of the characters and their situations, and intensifies them. There is the mournfulness of loss in the cello and the piano, the celebration of life in the djembe, and a blending of themes that represents a new direction and the irreversible changes that have taken place in Walter's life.
Buy Now

Tarek is a young man who is originally from the Middle East but came to the USA during the later part of his childhood with his mother. He has moved to New York, where he is a musician, playing the djembe both professionally and also in an informal drum group in Central Park just for the pure enjoyment of it.

In fact, Tarek is full of life and exuberance, as warm and accepting of others as Walter is reserved. He has a natural charm and likeability that break down even Walter's barriers, and which lights up those around him like sunshine. Who else but Tarek could convince Walter Vale to let down his guard enough to learn to play the djembe?

Tarek's easy warmth and way of seeing the good in others gives Walter the freedom to develop and move on from the past, as the pair form an unlikely friendship born from their mutual love of drum music. In a way, Tarek is opening a door on life for Walter, one that had seemed shut to him.

However, this ready acceptance of others and belief in the good in life also makes Tarek vulnerable. When a chance misfortune separates Tarek from all he holds dear, and a blind political system isolates him in a no-man's land, the balance of their relationship changes. Now it is Walter who is Tarek's only connection to his former life and to his loved ones who wait for him there. 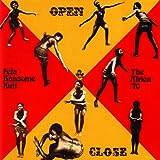 Open & Close / Afrodesiac
This is the CD that Tarek gives to Walter in The Visitor. Fela Kuti is one of the great inspirations of Tarek's music and, like Fela, Tarek too practises the djembe in his underwear! In the movie, Walter does not listen to the CD right away, and only discovers the passion and power of Fela Kuti's music later on, when events have changed beyond his control. The music marks an evolution in his own character too, as he breaks free from the self-imposed constraints and lets passion and excitement flood into his own life.
Buy Now

Want to learn the Djembe? - To learn this drum played by the characters in 'The Visitor' movie

You will need two things. A djembe. And a good teacher.

In the film, it is Tarek who teaches Walter to play the djembe. In fact, in real life, Haaz Sleiman (Tarek) had to take an intensive, one-to-one course of lessons in the djembe. Richard Jenkins (Walter), on the other hand, had several years of drum playing experience behind him! 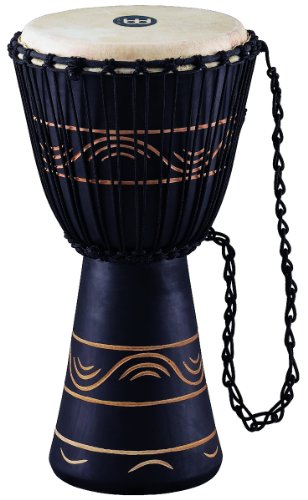 Meinl Percussion ADJ4-M+BAG African Style Rope Tuned 10-Inch Wood Djembe with Bag, Black
Here is a beautiful djembe that will inspire any would-be player of this instrument. This authentic African djembe is carved from a solid piece of mahogany wood (plantation grown). Decorated by hand with beautiful carvings, and finished with double-braided ropes. This djembe drum comes with a professional carrying back. This would be a wonderful investment for a committed beginner or improver looking to acquire an instrument of your own.
Buy Now

Zainab is the girlfriend of Tarek, who describes her as 'a good Muslim' and himself as 'a bad one' when he accepts the glass of wine that she refuses. She is originally from Senegal and so speaks French when alone with Tarek. (Danai herself is from Zimbabwe.) Her character is both proud and suspicious. She has all of the caution that Tarek lacks, and a reserve that matches Walter's.

Zainab designs jewelry that she sells on a market stall, refusing to haggle and suffering the ignorance of buyers who imagine the continent of Africa as one small, insignificant country.

It is Zainab who understands the reality of their situation, and who lives her life in fear of what could be around the corner. Tarek lives on 'Arab time', always an hour late, but Zainab does her best to keep him grounded. At the same time, she is unapologetic for who she is and the life she wishes to lead.

Only Tarek binds Zainab and Walter, and their relationship is uneasy at first, but over time a quiet respect grows between them as Zainab learns to accept help and Walter learns to provide it.

The Visitor: Beloved One video excerpt - Excerpt from 'The Visitor' -- Tarek and Zainab

This scene shows a typical exchange between Tarek and Zainab. Personally, I think one of the comments put it perfectly when they said that Zainab has a lot of self-control and that if Tarek had smiled at her like that she herself would have melted into a puddle.

At first, we know Mouna in The Visitor only from the fact that she telephones her son Tarek every day, and she gives the impression of being an over-protective, possibly interfering mother.

When Mouna appears on Walter's doorstep, we begin however to understand the origins of her constant concern for her son's well-being. We learn that her husband, a journalist back in Syria, went to jail for years for having aired his opinions and died shortly after his release. She built a new life for herself and Tarek in the USA, expecting to find a more tolerant society than that which she had left.

Mouna Khalil is a proud and dignified woman, uncompromising in her love for her son and her sense of what is right and just. She buries under a stubborn exterior both great warmth and a deep-rooted guilt and fear. Just as Walter and Tarek formed an unlikely friendship, so she and Walter form an alliance, bound by love of Tarek, that becomes a tentative romance between the two of them. Each begins to open up and to trust.

However, this cross-cultural romance between an American widower and a Syrian widow that offers new hope to them both is set in a context of a political system that blindly tears people apart according to black-and-white rules.

The Station Agent
A man who has dwarfism and is viewed by those around him as a curiosity, freak or target of taunts finds escape when he inherits a railway building on a quiet stretch of railroad. However, even here he is an object of fascination and finds himself getting caught up in the lives of a few misfit locals, in spite of his best efforts to stay apart.
Buy Now

If you love the style of movies written and directed by Tom McCarthy, you will want to watch his earlier film The Station Agent.

The movie Before Sunrise is another drama that captures those small moments (in this case, the whole story unfolds over just 24 hours) that can change your life.

It witnesses the chance meeting of a couple of young people travelling across Europe, and unexpectedly making a connection that will affect them long after the story ends. The film leaves the viewers with the almost unbearable suspense of wondering whether they met again. Fortunately, the question was finally answered in the sequel in 2004, Before Sunset, which begins with another 'chance' meeting between the pair. Find out what Fate has in store for these flawed, and very human characters as they find their paths crossing tens years later.

For another drama about human connection and the way music can break down barriers and bring two strangers together, check out the heart-warming Irish film Once, described below.

Once
A film about a male street musician (with a day job as vaccuum cleaner repairman in his father's shop) and an Eastern European immigrant girl with a hidden musical talent of her own that underlies her struggle to make ends meet. Their passion for music brings them together, but life is never simple and this is a love story with a difference.
Buy Now