So I did The Top Ten Song from Hunchback of Notre Dame but now let's refocus and just look at Notre Dame de Paris, one of the most famous and well known musical adaptations of Victor Hugo's Classic novel and one the of most loved musical in France and Europe.

I'm going to keep to the original version but I understand if people prefer another cast to the original French version. Also these are not my personal favorites (though there are few songs I don't love from the show) but that being said feel free to disagree with me.

I'm rating the songs by plot Importance, mood, character development, and musicality. Music is by Richard Cocciante and lyrics by Luc Plamondon.

NOTRE DAME OF PARIS
Official Original Cast Recording of Notre Dame de Paris. It's the best way outside of seeing the show live to watch it. You can watch it on youtube but trust when I say it much better to watch the DVD. If your a fan of the show it's a must have! It also comes with a 15 minute featurette about the show.
Buy Now

Dechire is one of the most upbeat songs in Notre Dame de Paris. It's sung by Phoebus (Patrick Fiori) and it's about his indecision to choose between two women, his fiancée Fleur de Lys and Esmeralda.

He's not upset by his indecision in fact he reveling in it, he seems to have a pretty good idea how to have "his cake and eat it too", one woman is for the morning and one for the night etc. Also in this song he seems to have more sincere feeling for Esmeralda, in the book she was just meant to be a one stand but here in this song he makes references about keeping the two as a norm. Anyway the song is fun, dancey, showcases Phoebus and it's fun to sing along.

Les Cloches is another fast pace song about Quasimodo's relationship with the Bells. He regales the audience of when he rings the bells and why but mourns the fact that the bells will never rings to celebrate a moment in his life. He also wants uses the bell to tell the world that he loves Esmeralda.

It's a great song that is both fast pace and bittersweet. The change of tempo is a really effective way to get into Quasimodo's feeling and understand him more as a character

Notre Dame de Paris is one few adaptations that give Fleur de Lys an actual characterization probably more than Victor Hugo gave her.

In this version she's a 14 year-old nobel who is engaged to Phoebus and she loves him. But she gets bitter towards his philandering way. In La Monture Fluer de Lys (Julie Zenatti) is expressing a yearning for Esmeralda's death and if Phoebus can ensure this she'll love him again.

It's a tense song that give Fleur de Lys an edginess. Pending on what version of the musical you're watch the staging is different. In the original French, Fleur de Lys sings La Monture to her shadow and there is more desperation to it, like she's reaching her breaking point with Phoebus. In other versions, she sings directly to Phoebus, she torments him and gets kind of suggestive with him. It's more manipulative, cold and calculating asking for Esmeralda's death. But no matter which version you watch it's still a great song full of Fleur-de-Lys' tension and bitterness.

In this song Frollo (Daniel Lavoie) sings about his pains of loving a women while being a priest. The emotion in this song is very powerful and you do get a sense that his tormented love is more than desire and lust but being a priest and having feeling of a women has severely messed him up.

Bohemienne is a fun song that introduces the audience to Esmeralda. It presents Esmeralda's backstory and personality. It's one of the few light-hearted songs in the show.

Helene Segara gets some criticism for not dancing enough but she tries to come off fun-loving and free spirited while maintaining a level of mystery. Other actresses in other versions get more choreography and tend to play up the fun-loving free spirited aspect. All in all Bohemienne is a fun song that makes the audience want to clap along and they do.

Esmeralda is in jail and sings about the birds that are caged and abused children (referring both Esmeralda and Quasimodo). Esmeralda wants Quasimodo to save her before she hanged and Quasimodo is in Notre Dame (he is sitting on a gargoyle to represent Notre Dame). He wonders where Esmeralda is and whether she is even a alive.

It's a beautiful, haunting and melancholy song that speaks to the bond that they form in the musical.

Lune is a strange and yet quite beautiful song. Gringoire (Bruno Pelletier) sings it as the story teller. He sings it to the moon to bear witness of the deadly power of love. He sings the song using Quasimodo as the prime example of a deadly love where a person becomes more important than the whole world.

It's a strange song, it's Gringoire take on the love Quasimodo is feelings. It maybe strange in this sense but it's a gorgeous song that has emotion and really does showcases the voice of Gringoire.

Les Temps des Cathedrales is the opening song of the musical and is sung by Gringoire (Bruno Pelletier).

It sets up the play and is about the purpose of a cathedrals; 'a book in stone', a way to preserve history, and how this world will end. It's a powerful song and a great way to kick off the show. It starts off soft and gradually builds in intensity which provides a great transition into the next song of the show "Les Sans Papier" which is intense in tone. It also shows off Gringoire's vocal capacity.

Josh Groban covered this on his Stages Album.

Danse mon Esmeralda is sung by Quasimodo (Garou) and it's a sad yet beautiful song. It is sung to Esmeralda who, spoiler, was just hanged. The song refers to the ending of the book where Quasimodo crawls in vault where Esmeralda has been laid to rest after her hanging and he lays down next to her to die.

It not the happiest ending but it very bittersweet as in death Quasimodo and Esmeralda are united. Danse mon Esmeralda is about Quasimodo's love for Esmeralda and his willing to die for her. It's a haunting, powerful and beautiful song that ends the show perfectly, all while leaving the audience in tears. It's so sad that the whole cast has to reprises Temps des Cathedral and be super smiley just to cheer up the audience.

Belle is the most famous song from Notre Dame de Paris. It reflects the basic plot of the book; three men, one woman.

In Belle, Quasimodo (Garou), Frollo (Daniel Lavoie) and Phoebus (Patrick Fiori) each sing about their own interest in Esmeralda. Each character gets one verse and then all three reprise Quasimodo's verse. Quasimodo sings about tenderness, Frollo sing about confusion and desire, and Phoebus sings about lust. The song is based off a chapter in the book "Three Men's Hearts, Differently Constituted" which deals with the guys' reactions to Esmeralda's hanging right before she is saved by Quasimodo and from the 1956 French film version of Notre Dame de Paris, where after being whipped Quasimodo asks for water and after Esmeralda gives him some he shouts "Belle" (Beautiful) to her. The Book provides the content for the song and the 1956 version provides the placement in the musical and the title.

The Song itself is gorgeous, powerful and a show stopper. On the DVD of Notre Dame de Paris, when a song ends there isn't that long of lag, so the person watching it doesn't' hear a ton of clapping but at the end of "Belle" the editors kept the clapping in and showed the audience (so it actually stops the show).

It's been the number one song for 18 weeks in a row in France when it was first released in 1998 and was awarded song of the year in 1999 at Victories de la Musique. 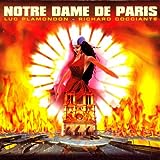 What Listed Song is your Favorite?

Argee, Disagree, Questions, Comments? Tell me what you think???