all images credited to Amazon.com

which scenes in horror movies that are most frightened you?

when the ghost appears suddenly and surprise you?

when the main character does not realize if there is a ghost that lurks behind him/her?

there is nothing more frightening than when you came home after watching a horror movie, then you have

exactly the same events from the horror movie you just saw.

this movies will make frightened you from beginning to end.

What would you do if you take pictures from your camera anda you saw something which should not be there?

This movie is about Tun a photographer and his girlfriend Jane who had an accident and hit a woman while driving a car.

they went away and did not help her.

since the incident, Tun often experience severe neck pain, and oddly every photo taken by Tun has always appeared a white shadow.

what is the cause of Tun neck pain? and where is the white shadow comes from? Will all the mystery solved?

Find the answer in this movie that has won best of the year 2005 in Thailand.

what happens if your eyes is blind and you do a corneal transplant? but after the operation, you suddenly can see ghosts wandering around you.

will it please you or make you afraid?

and then you try to figure out who the owner of these eyes before.

That's the core story of this film.

this movie is one of the best asian horror movie. and as a horror fans you must watch it.

there are 3 series of this movies, The eye, the eye 2 and the eye 3. the one i written is the eye.

get it from Amazon

This movie is directed by the same director that direct The Eye series. but the stories is different.

this movie is about myths on how to see the ghosts. 10 in the title means the 10 ways.

Buy The Eye 10 Movie From Amazon 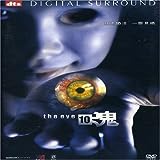 4BIA is a film where the contents of the film is divided into four stories, each telling a different story and characters.

so if you want a 4 in 1 horror movie, then this movie is for you.

the second sequel, entitled 4BIA 2 released in 2009 and contains 5 stories.

This movie makes me unable to sleep after watching it. really-really scary :(

i can't find the first 4BIA movie on amazon. so this is the sequel

Art of the Devil Series

This movie is about the story of Boom, thailand young woman who meets a married man named Prathan. and as we can expect, Boom pregnant but Prathan offers Boom some money to be quiet and not tell anyone.

feel hurt and betrayed, finally BOOM learn black magic to get revenge. will Boom able to avenge her Broken hearted feeling? find out in The Art of the Devil.

There are 3 titles The Art of the Devil:

- Art of the Devil

each title has different story.

Art of the Devil
Buy Now

This movie is about the story of 11 participants who followed a reality show in an abandoned museum .

the museum was once used as a place of slaughter by the Khmer Rouge soldiers and thousands of innocent people were tortured and died there on the war in Cambodia in 1970.

one winner will receive a prize of 5 million baht.

what kind of supernatural events they would find there? will there be a winner?

what mysteries lies in that museum? find the answer in Ghost Game movie.

a group of teenager musicians checked into a hotel after their performance on the outside town of Bangkok, not knowing that the hotel room that they use to has a mystery. and they must solve the mystery in order to survive.

Will they survive? find the answer in The Sisters Movie.

Buy The Sisters Movie From Amazon

buppah rahtree is the name of a smart introvert woman. at one point she liked a guy and later become pregnant with him.

the man told her to have an abortion and after that he left her alone.

because she can not survive Buppah became sick and died from the complications after the abortion.

Buppah body's might have died, but his spirit did not want to sit back and take revenge.

this movie also has 2 sequel which is:

the scene in the film is believed to occur in chiang mai. a family moved into a luxury residential site in Laddaland. but without realizing that many horrific events have occurred in the place and now the place is haunted.

Get it from Amazon