I love jewelry and I love movies, so naturally I love movies that make jewelry a focal point or just simply have beautiful pieces of jewelry in general. This is a list of some of the most memorable pieces to ever grace the silver screen. The pieces were chosen for memorability, importance to the character or plot and overall aesthetics. This List features Rings, Brooches, and Necklaces.

The Boleyn "B" from The Other Boleyn Girl

In The Other Boleyn Girl, formally disgraced Anne Boleyn (Natalie Portman) returns to England from France donning a golden "B" necklace. She is supposed to to be their to keep King Henry’s mind on her Sister Mary however the ambitious Anne has other designs.

The Boleyn “B” necklace is an iconic part of Anne Boleyn’s look. In addition to the Gold B, it has teardrop pearl beads that hang off of it and is strung with rondelle pearls.

The Boleyn B Necklace is not only a symbol for Anne and the Boleyns but also represents her boldness.

Gone with the Wind Cameo Brooch

Gone with the Wind is one of the most lasting movie ever. Made over seventy years it’s still popular with movie-lovers today. As the movie ends, Rhett Butler (Clark Gable) leaves Scarlett O'Hara (Vivien Leigh) and he utters the most famous movie line ever. During the ending, Scarlett, who is in mourning, wears a magnificent oversized brooch. In classic Victorian mourning fashion, it’s a cameo. However unlike most cameo brooches instead of a profile it’s a figure riding a bird. It has a gold setting.

This brooch was not made for the film, it was actually own by Walter Plunkett’s Mother. Plunkett was the costume designer for Gone with the Wind.

In the third movie of the Twilight Saga, Bella Swan (Kristen Stewart) is given a precious family treasure from her fiancée Edward Cullen (Robert Pattinson) as an engagement ring. The Ring is based on Victorian designs. It is a long oval setting with rows of round stones. The band is narrow.

Stephanie Meyer and Infinite Jewelry Co collaborated to bring this ring to life.

AURYN from The NeverEnding Story

The AURYN in the NeverEnding Story is a symbol of the Child-like Empress (Tami Stronach) the ruler of Fantasia. It has the power to grant any wish of the wearer but only with the permission of the Empress.

AURYN is composed of a silver and a gold snake entwining to form an ouroboros. This is the symbol for infinity

The Mockingjay Pin from The Hunger Games

The Mockingjay pin is a powerful symbol in the The Hunger Games . It is a symbol of Katniss Everdeen’s (Jennifer Lawrence) home district and a symbol of rebellion.

The Mockingjay pin’s design emulates Katniss as she is both tough and beautiful at the same time. The Mockingjay pin is a casted pin that focuses on a bird, the mockingjay, holding an arrow.

The movie version of the pin is made from sterling silver that was plated in 22 karat gold and then given an antique finished.

The Colored Ring From Lust, Caution

Lust, Caution (Se, jie) Wong Chia Chi (Wei Tang) os sent to seduce the head of the secret police Mr. Yee (Tony Leung) during the Sino-Japanese war. Her primary goal is to set up his death and to do that she needs him to drop his guard. However when he gives her a ring to show his affection for her anything changes and she can't bring herself to conclude her mission.

The ring he gives her is a 6.1 carat pink diamond that has two halos for a setting. A Halo setting is when a gem has a circle of diamond around it to give the stone the impression of being bigger. The Ring was Design by Cartier.

To indicate this ring impact of the film the title of Lust, Caution in Chinese, Se, jie is a homonym that means "Colored Ring."

The Pirate Medallion from The Pirates of the Caribbean

The Pirate Medallion from The Pirates of the Caribbean is actually an aztec gold. According to the legend the Aztec put a curse of the coins that makes the people who removed the coins from the chest turn into the living dead. To return to living the coins must all be returned with a blood offering. The Medallion is a central prop in the film as it is the last coin to be returned to the chest thus is critical to the pirates of the Black Pearl who are all cursed.

The Medallion ha a skull in the center and it based off actual Aztec gold coins. It was cast in bronze and plated in gold.

The Diamond Necklace from Moulin Rouge

In Moulin Rouge, Satine (Nicole Kidman), a beautiful courtesan, is presented with a lavish diamond necklace by the rich yet possessive Duke Monroth (Richard Roxburgh). In taking the necklace she would have to give up her love, Christian (Ewan McGregor) who is a poor writer.

This necklace is most expensive piece of jewelry ever made for a movie. It has 1,308 diamonds and it weighs 134 carats overall. It was designed by Stefano Canturi and it was based on the garland necklaces designs which were a popular style of necklaces in the late Victorian period.

The EvenStar from The Lord of the Rings

The Evenstar from The Lord of the Rings is a necklace Elven necklace owned by Arwen Undomeil (Liv Tyler). She gives it to her human lover, Aragon (Viggo Mortensen) as a reminder of their love. It is also a symbol of Arwen's immortality

The EvenStar pendant was made for the movie but was based on a necklace Arwen wore in the books. It was designed by Ngila Dickinson who designed the costumes from The Lord of the Rings. Like most of the design for the Elves, the EvenStar has an Art Nouveau style that in very organic is tone.

The Heart of the Ocean from Titanic

The Heart of the Ocean (La Coeur de la Mer) from Titanic is a pivotal prop to the film and adds a bit of mysterious to the narrative. It’s also a big part of the memorable drawing scene. According the film this diamond was part of Louis XVI’s crown jewels. It was cut into a Heart shaped diamond after the French Revolution. Steel tycoon, Caledon Hockley (Billy Zane) acquires the necklace and gives it to his fiancée Rose DeWitt Bukater (Kate Winslet) to shows her his affections for her.

Blue diamonds and the Titanic have a long history together. The 1943 film based on Titanic also featured a Blue Diamond. Also 2nd class passenger Kate Florence Phillips wore a Diamond and Sapphire necklace given to her by her fiancée who died on Titanic.

The Heart of the Ocean was made using a blue cubic zirconium set it in white gold. It was created by London jewelers Asprey & Garrad. It inspired by the Hope Diamond which was famously owned by Louis XIV.

The Heart of the Ocean 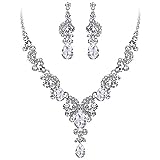 Which Piece of Movie Jewelry on this len is your Favorite

Which of the Pieces of Jewelry would you want to wear?