Disney's Toy Story movies have been hugely successful both in terms of sales and with the critics and the public. This year, Disney-Pixar presents the whole gang again in Toy Story of Terror, a brand-new Halloween television special that will air on ABC on October 16, 2013. Fans of the Toy Story movies will no doubt embrace a spooky Halloween themed special featuring their favorite friends from the iconic movie franchise. On this page, learn a bit more about the special. Be sure to come back and let us know what you thought of it after it airs.

Click here to order Toy Story of Terror on blu-ray disc or DVD from Amazon.

An ordinary road trip with all of our favourite friends from Disney-Pixar’s Toy Story Franchise takes an unexpected turn in the road when it checks into a motel and a toy disappears. (Sorry, we’re not saying which one. The remaining cast becomes entwined in a series of events, which must be unravelled before they occur again…

My Thoughts About Toy Story of Terror

Well, we've just finished Toy Story of Terror and we were suitably impressed other than the fact that product placement was given to ebid over eBay, which was disappointing because I sell on eBay. (Find Treasures By Brenda on eBay here.)

The television special was good and it was intense. Jessie never gave up and that is what Combat Carl would advise you if you are ever in a difficult situation.

If we had to complain, we would say only that it was too short. It was over before before we were ready for it to be over!

When Will Toy Story of Terror Be Released on DVD?

Of course you probably know that it already has been! It was released on blu-ray disc and DVD on August 19, 2014.

Toy Story of Terror is in stores now and I see that the DVD is very affordable on Amazon where it is marked down already and retails for just under $10 on DVD and just over $10 for the blu-ray disc. Toy Story fans won't want to miss adding this television special to their home movies collection!

Buy the Toy Story of Terror Soundtrack - From Amazon. 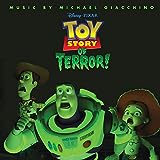 Do You Love Toy Story?

Do you love the Toy Story movies?

Have A Disney Halloween

Big fans of Disney surround themselves with Disney all year long, including Halloween! Follow this link or click on the image here to discover a page full of ideas to celebrate Disney on Halloween this year.

Have you seen Toy Story of Terror?