United Breaks Guitars is the name of the YouTube video that went viral after Dave Carroll of the Nova Scotian band Sons of Maxwell's experience travelling to a concert tour on March 31, 2008.

A fellow passenger cried out, "My God, they're throwing guitars out there."

Sure enough, it turns out that the guitars were thrown into the luggage compartment and that one was severely damaged.

The video United Breaks Guitars was the result. It shared the nine month struggle that ensued as Dave Carroll pursued compensation for the damage done to his guitar.

On this page find the first YouTube Video entitled United Breaks Guitars and a second video which is a statement acknowledging the response from United Airlines.

This is the story of a customer service gaffe on the part of United Airlines and "The power of one voice in the age of social media."

Click here to read more about United Breaks Guitars: The Power of One Voice in the Age of Social Media on Amazon.

The story of how United Airlines and Mrs. Irweg dealt with him.

On March 31, 2008 the Sons of Maxwell band, of which Dave Carroll is a member, flew via United Airlines to Nebraska for a tour. While sitting on the tarmac, passengers on the flight witnessed the guitars thrown by baggage handlers in Chicago and damaging Dave Carroll's $3,500 Taylor guitar.

Dave Carroll's immediate concerns to the staff at hand were dismissed. It would take him nine months and a lot of run around to sort the matter out. He spoke with several employees on the day of the incident. After that, he would speak with staff in Halifax, Chicago, Omaha, New York and India. (You really should read the whole article at Dave Carroll's website to appreciate how ridiculous the system was.) Eventually, he dealt with Ms. Irlweg who finally said, "No."

At this point, Mr. Carroll realized that he had been fighting a losing battle all of this time. The system seemed to work to frustrate the customers so that they would simply go away. However, he decided to take what he knows best (music) and use it to his advantage. He wrote to Ms. Irlweg and told her that he would be writing three songs and videos about his experience.

"I promised the last person to finally say 'no' to compensation ... that I would write and produce three songs about my experience with United Airlines and make videos for each to be viewed online by anyone in the world."

His guitar has been repaired but I have read that Dave Carroll says it will never be the same.

Dave Carroll's guitar was more than just another piece of luggage. The cedar-top acoustic Taylor 710 CE guitar was something he saved for for three years when he was dreaming of becoming a professional musician after he graduated from Carleton University in Ottawa. He saved everything that he could from local gigs and from living inexpensively. Eventually, a smart investment doubled and he was able to purchase his $3,500 guitar. His Taylor 710 CE 'spoke' to him after he tried a number of guitars at Steve's Music in Ottawa. It is said that it was " love at first strum." And it featured a "reddish top and a nice, warm baritone." He bonded with it instantly because it matched his tenor-baritone.

Do you have a special bond with your musical instrument?

"Taylors, for the uninitiated, are akin to the Rolls Royce of acoustic guitars." ~~ Lou Carlozo

Dave Carroll Shares His Thoughts - About the success of the video United Breaks Guitars.

Taylor Guitars 30 Years of a New American Classic
"This gorgeous, premium book tells the story of how Bob Taylor and Kurt Listug took a small San Diego guitar-building company and transformed it into an industry leader that produces more than 70,000 high-quality guitars a year. Features dozens of full-color photos of many rare guitars, including instruments Bob Taylor built before the company's founding, standard production models (including the acoustic bass and the new nylon string series), custom-built instruments, and special celebrity models." ~~ Amazon
Buy Now

What have YOUR experiences with United Airlines been like?

Will Carroll's video help the rest of us when we deal with United Airlines or any other large company? What do you think?

United Breaks Guitars is an interesting video but will it actually cause United to deal more fairly with all of its customers when they complain? If not what does that mean? Do we have to post a YouTube video to get results?

To get one million hits this year and he has far surpassed that. So much time had passed that Mr. Carroll was no longer angry and he and the others involved with the video had a great time putting it together.

"Thanks United! If my guitar had to be smashed due to extreme negligence I'm glad it was you that did it. Now sit back and enjoy the show."

"It's nice to have a light-hearted chuckle at things." ~~ Dave Carroll

Dave Carroll created this video as a lark not realizing that his band would receive more exposure than than they have ever received, the kind of publicity that cannot be purchased. He has been working for 15 years as a solo artist and a member of this band and this song is proving to be an incredible boost. (He is not seeking compensation from United Airlines.) He thinks that people like the song because it is about the airlines and because it is light-hearted and fun. So far, United Airlines seems to be handling the publicity in good form and using it (and the video) as a lesson.

As an aside, the song and the video really ARE good. (But you already know that if you watched the video. If you skipped the video you might want to go back and hear it now.) The tune is catchy and well done but unfortunately, I'm stuck with that line, United Breaks Guitars, running around and around in my head. 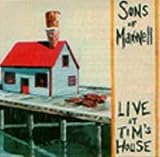 (A taste of them! Once you've heard the song in the video, you're going to keep hearing the line 'Cause United Breaks guitars.)

You broke my Taylor guitar

Some big help you are

You broke it, you should fix it

You're liable just admit it

I should have flown with someone else or gone by car

United Breaks Guitars: The Power of One Voice in the Age of Social Media - Order your copy of the book today. 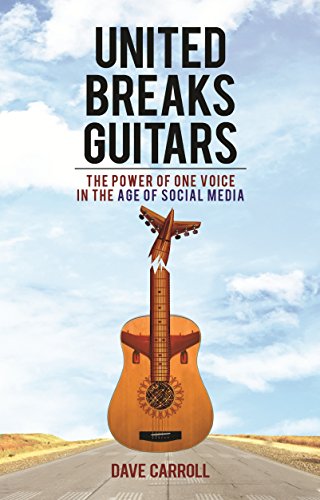 What was the biggest error United Airlines made in this situation? - And what do you think of the Sons of Maxwell and Dave Carroll's video response?