Why I love Dr. Strangelove

Dr. Strangelove or: How I Learned to Stop Worrying and Love the Bomb (1964), written and directed by Stanley Kubrick, is a satirical black comedy about nuclear holocaust and the Cold War. Ridiculous situations and eccentric characters collide in the worst possible ways as the future of life on earth hangs in the balance.

The storyline is a riot and the performances are unforgettable. Without question, one of the best movies of all time. On this page, I'll give my own little analysis of Dr. Strangelove and talk about some of the ways this great movie has affected me.

According to Wikimedia Commons, images from the movie "Dr. Strangelove" are in the public domain.

Dr. Strangelove, Or: How I Learned to Stop Worrying and Love the Bomb (Special Edition)
There's nothing better than a well-executed comedy of errors. And Dr. Strangelove is one of the best comedies ever. Contrived absurdities and mishaps are set against the most serious possible circumstance, the destruction of the world. Terrific acting and a wonderful script make this movie hilarious and terrifying at the same time.
Buy Now

Dr. Strangelove or: How I Learned to Stop Worrying and Love the Bomb is based on the novel Red Alert by Peter George. The novel was a straightforward drama. The decision to make the film a satire came about because Stanley Kubrick realized how many elements in the story were really absurd when analyzed closely. He decided that he would have had to leave out major portions of the book if he had tried to keep it as a serious drama. The only way to tell the tale was as a comedy.

In the story, one Air Force general figures out a way to single-handedly order a first strike nuclear attack on the USSR, setting in motion a chain of events that seems unstoppable and will result in unthinkable destruction. Everyone from the general's first officer to the President of the United States is desperate to derail the freight train of destruction.

As frightening as the subject matter is, the movie is nonetheless incredibly funny. Saying something moronic with a completely straight face is so much funnier than delivering wisecracks with a big wink and a knowing grin. The screenplay had a wealth of great comic lines in it, and these were supplemented by hilarious ad-libbing from Peter Sellers, especially in his role as the President.

There is also a fair bit of sexual innuendo in the film, from the opening shot of the fighter plane to the names of the characters, to Ripper's reason for thinking he's been sabotaged by the Communists. None of it is loud or in-your-face, and a lot of the terms are words that only people who scored high on the SAT would understand. Some reviewers think that Kubrick uses these references to make a statement about the psychosexual motivations for warfare. I think he's just keeping up the comedy quotient.

Who do you like most in the movie? - All the acting in Doctor Strangelove is great, but who is the best?

Which is the best acting performance in "Dr. Strangelove"?

Another remarkable feature of Dr. Strangelove is Peter Sellers's performance in three different roles, each memorable and unique. He is cast as Captain Lionel Mandrake, as the President of the United States, and as the mysterious Dr. Strangelove. His work in the film earned him a Best Actor nomination.

Playing Mandrake was the easiest of the roles for Sellers, who had served in the British military during World War II and was known for doing impersonations of his superior officers. This is my favorite of his three performances, with Sellers on pins and needles as an officer who is trapped in an office with the mad general who ordered the attack.

To play President Merkin Muffley, Sellers adopted a Midwestern accent and is said to have used Adlai Stevenson as his inspiration as he tries to fix a colossal military screw-up. His monologues representing one-half of his phone conversations with the Soviet premier were largely ad-libbed and very funny.

Doctor Strangelove, a presidential adviser, is a handicapped former Nazi who's on our side now. Sellers plays him with a thick German accent and lots of bizarre tics and gestures. Strangelove is not as far removed from his past as we would like him to be, occasionally doing a Nazi salute inadvertently or calling the President "Mein Führer."

Kubrick had also intended for Sellers to play Maj. Kong, the fighter pilot. Sellers was apprehensive about doing the Texas accent required for the role, but finally mastered it. During shooting, however, Sellers sprained his ankle and was unable to work in the cramped set that portrayed the cockpit of Maj. Kong's plane. A lot of Sellers's ad-libs as Kong were preserved and written into the screenplay. The role was then given to Slim Pickens, a native Texan who took to it like a fish to water.

What a choir director can learn from a movie director

Stanley Kubrick was deeply, almost obsessively, concerned with the possibility of nuclear holocaust. He decided to make a movie based on Red Alert because he was driven to send a message about his views on nuclear weapons and the Cold War mentality.

But he still considered it important to make an engaging, entertaining, and visually beautiful film. He spent huge amounts of time and effort on designing stunning sets, casting terrific actors (including a hottie in a bikini), and writing a hilarious screenplay. Did that mean that he was forgetting his underlying purpose? No. He did all of that in the service of his underlying purpose. And it worked. Dr. Strangelove is now an indispensable part of our public consciousness about the nuclear threat.

That resonates with me as a gospel musician. Sometimes people want to imply that if gospel musicians care too much about making their music beautiful and appealing, they are losing sight of "what's really important", the message of the music. I believe that putting effort into making the highest-quality music reinforces the music's message and brings it to life, if it's done right. Doing something that people like doesn't automatically make you a sell-out.

Analysis of themes from "Dr. Strangelove"

Reviewer Gene Phillips echoed the message that impressed me the most as I once again watched Dr. Strangelove. Phillips said: "Kubrick, who is always on the side of humanity in his films, indicates here, as in 2001: A Space Odyssey, that human fallibility is less likely to destroy man than the relinquishing of his moral responsibilities to his supposedly faultless machinery."

There is only one person in the entire movie who originally wanted a nuclear war to take place. And yet, because of the policies, protocols, and technologies that have been put in place, the rest of the world is strait-jacketed into carrying out the wishes of one idiot.

Sometimes we're good at telling ourselves that certain things will never happen. It's a form of denial. "In theory, we should be prepared for this or that, and we'll go through the motions of being prepared for it, but we won't get too worried about it because it would never really happen. It would be too horrible."

Originally, the machine gun was seen as a weapon so horrible it would make war unthinkable. Now machine guns are on our city streets. The unthinkable becomes commonplace.

In Strangelove, we see the soldiers who prepare every day for something they think will never happen. It's clear that they don't expect it to happen because when it does, everyone's first response is denial/disbelief (Capt. Mandrake thinks it's a drill, Major Kong thinks his men are joking around, Gen. Turgidson thinks someone misunderstood a message). But the training and preparation that the fighting men have gone through has prepared them to carry out the unthinkable when commanded to, and they're actually ready to do it.

In this sense, Dr. Strangelove is trying to be an obvious wake-up call to people who think that some things we have created and prepared are too awful to ever really happen.

There's a 1984 article in the Bulletin of the Atomic Scientists called Normalizing the Unthinkable by Lisa Peattie, which examines these issues. (By the way, in an analysis of Peattie's article, Edward Herman actually uses the adjective "strangelovian".)

There's an episode ("Let That Be Your Last Battlefield") in the original Star Trek series that features two men who are the sole survivors from their planet. Even though the rest of their population has destroyed itself in a war over skin color, the two of them return to their desolated planet and continue on trying to kill each other. Similarly, in real life, there are gangbangers who have moved to other cities or even been deported to other countries and still claim their same gang affiliations and even recruit others in their new environment to kill and die in the name of Los Angeles turf that they have never even seen. Their view of the world runs so deep that they can't let go of it, even when everything it was attached to is gone.

We see the same thing in Dr. Strangelove. The hatred and mistrust that fuels their US-vs-THEM paradigm has so captivated their minds that they feel certain that their descendants, nuclear holocaust survivors, after 100 years of living underground, will still be USes and THEMs, freedom-loving Americans and filthy godless Commies who will want to continue the very same rivalry.

A sampling of "Dr. Strangelove" reviews

Each one covers a different aspect of the movie, and each one is worth a read.

I've also written pages about a couple of characters from "Dr. Strangelove"

The novel that "Dr. Strangelove" was based on. 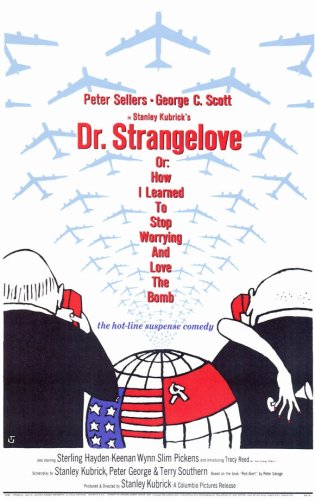