Which is the best guitar pick for me and what do my favorite musicians play and why?

Learn in which situation which pick works best and how picks influence the sound of the masters of Jazz, Pop and Rock

Your sound is not only achieved by your guitar,amp and effects . If so, there would be a lot of Kirk Hammets, Steve Vais, Rosenwinkels or Bensons out there.Its the conscious use of all components of your guitar playing.Which pick you use plays a huge role in the outcome of your sound, feeling and even your timing.

And the other way round, important Jazz/Fusion guys like Adam Rogers who play in very different setttings and bands, actually play different picks depending on the guitar, amp or musical situation they are into.

Due to the complexity and the many possibilities of the topic a lot of players go through a period of creating their own custom picks.

There is also a bunch of good companies on the web offering custom picks.

Click here to visit Chapter 2 to see which player uses which pick.

1. How important are thickness and size of your pick?

Material,size and thickness of the pick make the sound or why a metal pick will suck in folk music

First of all, you should choose your pick depending on the musical situation you are facing.

Overall, it can be said that a heavier pick will be more comfortable for accurate single note picking.

Looking at a statement of Steve Vai on the topic might explain why:

"Well, you know, the heavy picks don't give. When you hit the note, the note comes out. I don't like sloppy picks. When I'm playing hard, the pick needs to be a constant. If the string makes the flop it throws off my ability to control the amount of picks I'm picking, or the strikes I'm picking I guess."(Quoted from website)

I think that goes for a lot of single note virtuoso players .A confirmation of that can be taken of the list i put together for chapter 3, where you find which player prefers which pick.

However, even in that style you can find a lot different taste in matters of thickness and also size.

E.g. Dave Mustaine plays relatively soft picks, cause he likes when he can feel that the strings respond, while Steve Vai or Al Di Meola need a non-giving hard attack for their style.

The size is also important. The bigger the pick, the less space is between the strings that you are playing(implying you don't play in a total parallel angle to the strings) which makes the playing feel softer for many people.

A small pick will feel like the extension of your fingertips which creates a very constant character to your notes, but doesn't leave so many facets in terms of varying volume of your attack.

George Benson prefers Fender Medium -they are able to give you that bright and at the same time fat sound, cause they are not to hard and relatively big.The thicker it gets the darker your sound will be, which is often a desired effect of other jazz players.

Taking it to a thicker level one can look at Death Metal guitar players.For their low tuned guitars and therefore thick strings, they need heavy picks and players often will not take any pick under 1,5mm.

Thinner picks as mentioned above are used for chord-playing in an acoustic or pop setup where you wanna hit all the strings and make sure you can glide through all six strings smoothly.

A short overview on the approximate thicknesses/gauge of the picks:

2. A List of famous players and the picks they are known to use MOST of the time

see all the genres from vintage rock to heavy to jazz

All information about the mentioned guitar players is based on personal researches I did.

I have seen those players on concerts, on video or visited their homepages. For sure most guitar player will not use one pick

Vintage Rock Picks: - Check out all the genres from vintage rock to heavy to jazz.J Hendrix, Jimmy Page and all the classic rockers used the following picks 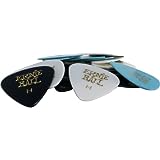 Jimmy Page and Pete Townshend used these picks for their aggressive, uncompromised sound.Very good to get that vintage rock touch. 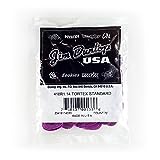 Joe Perry from Aerosmith his into this pick 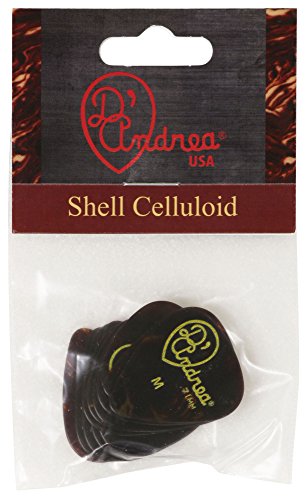 Richie Sambora of Bon Jovi loves the sound of this one

Metal Picks - They heavy rockers of Metallica, Megadeth or virtuosos like Steve Vai and Joe Satriani use these picks 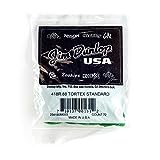 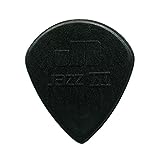 Kirk Hammett and Alex Laiho use this.

Pop/Rock/Blues Picks - Pop megastars like Brian May of Queen, Carlos Santana or the Edge of U2 as well as blues players like B.B. King use these picks 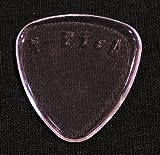 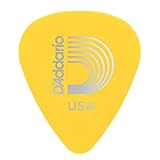 Pat Metheny uses this one

3. Materials a guitar pick can be made of

Most picks manufactured by the big companies are made of plastic.Variations of plastic include:

Celluloid: The first plastic used to produce picks.Good to achieve a vintage tone.

Nylon: Is often used for thin and very thin picks.

Acetal: Is a class of plastics with a long lifetime. Delrin picks are made of it.They seem to flow easily over the string without making much noise.

Acrylic: Has a bright tone to it. Available in any thickness, V-Picks is known to use this Material.

Delrex: Is a material that has been used as a replacement for tortoiseshell since trading that has been prohibited in the 70s.Dunlop uses it quite often.

Wooden picks sound warmer then plastic ones. Each one has its unique sound due to the individual structure and density of the material.Usually a wooden pick needs to be played quite a while until it flows smoothly over the strings.

In recent years stone picks became more popular. They are very hard and mostly used from 0.7 and thicker.Each one is individual in its exact size due to the material.Can be e.g. of agate and jade.

Also very hard and a rich variety in tone.Individual sound and many possibilities of shaping it.Some people compare it to play v-picks

Just write me which picks you like best and why.Do you know any famous players and the picks you have seen them use?