Who are The Hoosiers?

Just who are The Hoosiers?

If you live outside of Europe and the United Kingdom, I wouldn't be surprised if you've never heard of them and band members Irwin Sparkes, Martin Skarendahl and Alphonso Sharland. Although this England-based indie-pop band hit it big in their native country with their 2007 debut "The Trick to Life" the group has not reached similar popularity elsewhere in the world.

That most people haven't heard of them is a terrible shame, since (in my opinion at least, and the opinion of their many other fans), their music is truly unique, creative and insanely catchy. The band members have wonderful senses of humor as well - and aren't too hard on the eyes, either! Read on to learn more about the group that calls their sound "Odd pop," and check out some of their music and videos. You may be delightfully surprised by what you hear and see - at least I hope you will be!

The Hoosiers on stage at Solidays 2008. Photo by KellyChlew on Flickr.

Have Your Heard of The Hoosiers Before?

Are you familiar with The Hoosiers and their music?

"Goodbye Mr. A" - One of The Hoosiers Most Popular Songs

If you've not heard of The Hoosiers before, then start with this music video for their hit song "Goodbye Mr. A." The song might be strongly reminiscent of ELO's "Mister Blue Sky" but with singer Irwin Sparkes wonderful vocals and their evident wacky sense of humor in this superhero spoof, it's hard to resist the band. Then, continue on to check out some more of their great songs and music videos collected below, from their first album "The Trick To Life".

A Brief Introduction to The Hoosiers

The Hoosiers currently consist of Irwin Sparkes (lead vocals, lead guitar), Martin Skarendahl (bass guitar, rhythm guitar), Sam Swallow (keyboards, vocals) and Alphonso Sharland (drums, percussion, vocals). Irwin, Al and Sam hail from the United Kingdom while Martin is from Stockholm, Sweeden. Both Irwin and Al spent time in the United States, encouraged by a chemistry teacher to broaden their horizons and knowledge of the world. The pair ended up winning a soccer scholarship to the University of Indianapolis, which was where they would come up with the name for their band: The Hoosiers, based on the nickname for citizens of Indiana. Returning to London once they had enough material for an album, the duo met Swiss keyboard player and sound engineer Duri Darms, and also Martin Skarendahl who was working with Darms at the time while studying at The London Music School. After some personnel changes, Martin would join Irwin and Al and the band would become the trio known today as The Hosiers.

Their first album, "The Trick To Life," was released in 2007. Although it did not receive widespread critical appreciation, the album spawned several hit singles in the UK including "Goodbye Mr. A," "Worried About Ray," "Worst Case Scenario" and "Cops and Robbers." The album did reach #1 on the UK charts and ended the year at #98 on the End of Year UK Album Charts.

Their second album, "The Illusion of Safety", was released in 2010, but they departed their record label the following year and re-released the album re-entitled as "Bumpy Ride" with additional bonus material. In the fall of 2013, the band re-emerged from a long hiatus announcing that they were at last finishing up their third album, which would be released the following year. They would be recording it on their own without a big record label and asked for fans to support it with pre-orders and special packages. This album, "The News From Nowhere", was released in 2014. Longtime keyboard player Sam Swallow was now officially a member of The Hoosiers, and was featured more prominently in some of the songs with both vocal and musical contributions.

The Origins of the Band...But Not Really - How Did The Hoosiers First Meet?

Want to learn more about how The Hoosiers came to be? Then don't watch their hysterical mockumentary linked below. This clip also features the fun music video for their song "Cops and Robbers."

These are some of the best official and unofficial Hoosiers resources on the internet. If you want to learn more about the band, then check out these links!

Al Sharland of The Hoosiers. Photo credit: KellyChlew on Flickr.

Do You Have a Favorite Member of The Hoosiers? - This question is for the fans only!

Who's your favorite: Irwin, Al or Martin?

"The Trick To Life" - The Hoosiers Debut Album 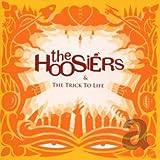 The Trick To Life
The Hoosiers' debut album is a wonderful collection of pop music. The songs are catchy, thoughtful, with lyrics that go far beyond the typical "boy meets/loses/misses girl" and featuring Irwin Sparkes captivating vocal work. Although sometimes derivative in sound, these are songs that will get hooked in your brain and refuse to let go. My personal favorite is the moody and atmospheric "Everything Goes Dark." Fans of 70s pop rock and 80s new wave should find plenty to enjoy in this collection.
Buy Now

"The Illusion of Safety" - The Hoosiers' Second Album, Released in 2010

In 2010, the band returned with their sophomore album, "The Illusion of Safety." The album featured a rather strong departure from their earlier pop-rock sound, being more keyboard and dance-music oriented. It only reached #10 on the UK album charts but many critics were kinder to this release than their first. The band themselves felt their record company was no longer giving them the support they needed and deserved, and announced in 2011 they had split from their old label and would be re-releasing "The Illusion of Safety" on their own later in the year. The new version of the album would be retitled "Bumpy Ride" and feature additional tracks and bonus video footage.

The Hoosiers' sound takes a sharp turn with "The Illustion of Safety." Reminiscent of 80s synthpop yet still thoroughly modern, the band keeps things fresh and more danceable than ever. Top tracks include "Live by the Ocean" and "Unlikely Hero." The album also features the haunting "Devil in the Details," with drummer Sharland providing the vocals for a change of pace. For fans of bands such as Keane, Depeche Mode and Maroon 5, you will likely find much to enjoy here. 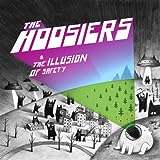 Illusion of Safety
The Hoosiers' sound takes a sharp turn with "The Illustion of Safety." Reminiscent of 80s synthpop yet still thoroughly modern, the band keeps things fresh and more danceable than ever. Top tracks include "Live by the Ocean" and "Unlikely Hero." The album also features the haunting "Devil in the Details," with drummer Sharland providing the vocals for a change of pace. For fans of bands such as Keane, Depeche Mode and Maroon 5, you will likely find much to enjoy here.
Buy Now

Read my full review of The Illusion of Safety, at my own website.

"Stop Giving Me Verses!" - The Hoosiers Parody Themselves

In the summer of 2010, The Hoosiers had a contest for fans to rewrite the lyrics to their song "Choices." The band recorded their favorite submissions and the result was the over 40-minute long remix "Stop Giving Me Verses." You can hear and see highlights from the recording in the videos linked here.

"Bumpy Ride" - The expanded version of their second album 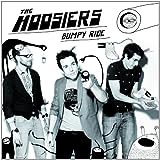 Bumpy Ride
In 2011, the band re-released their 2010 album "The Illusion of Safety" with four bonus tracks and a bonus DVD. Enjoy 7 acoustic renditions of great Hoosiers tunes, each one uniquely filmed and sure to delight fans of the band.
Buy Now

With "The Illusion of Safety" re-issued with bonus tracks, videos and a new title, the band released an extended length music video to celebrate. Check out perhaps their best video yet to date, "Bumpy Ride." The Hoosiers filmed the video in Las Vegas and other locales in the United States including Roswell, New Mexico. Then, check out their other videos from the album to hear more!

Hoosiers' fans everywhere have plenty of reason to celebrate the band's return with their third full album of new material! It should especially delight those who were fans of their more alt-rock sound on their first album than the techno-dance, synth-heavy sound of "The Illusion of Safety". 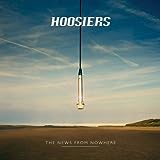 Read my full review of The News From Nowhere to find out what I thought of the album--and how much I loved it!

Music videos from "The News from Nowhere" - Get a taste of the band's new music and sound!

Explore More Great Music with Sockii! - Other pages about my favorite bands and artists

A Beginner's Guide To The Police: Their Music and History
The Police were one of the hottest bands of the late 70s and early 80s, rocking the charts with such now-classic songs as "Roxanne", "Message ...

Foo Fighters Drummer Taylor Hawkins: A Tribute
Taylor Hawkins is best known as the drummer of the rock band the Foo Fighters, one of the hottest and hardest rocking bands today. Indeed, they just were awa...

Guitarist Andy Summers of The Police
Andy Summers is best known for his years as the guitarist for the rock band The Police. His innovative, instantly recognizable sound was as critical to the b...

I Blame Coco
I Blame Coco is the name of the band headed by Coco Sumner - the beautiful and talented daughter of rock legend Sting and his wife, filmmaker Trudie Styler. ...

MercyMe Fan Page
MercyMe is one of the most popular and beloved rock bands on the Christian rock music scene today. They have gathered fans all around the world thanks to the...

My Top 10 Concert Experiences
Not long ago, fellow on-line writer Tony Payne published a fun article on "What Makes a Rock Concert Memorable." I agreed with many of the points a...

Stewart Copeland - The Rhythmatist of The Police
Most people know Stewart Copeland as the drummer for the rock band The Police. But while his work with Sting and Andy Summers was some of his most popular, S...

The Ultimate Beatles Fan Survey
The Beatles are one of the world's greatest musical groups in modern history. Their legacy and music has inspired countless numbers of fans around the world....

The Ultimate Duran Duran Survey
Duran Duran were one of the most popular New Wave bands of the 1980s and maintains a dedicated fan following today. Indeed, despite shifting musical trends a...

The Ultimate Pink Floyd Fan Survey
Pink Floyd is undeniably one of the greatest rock music bands of all time. From "Dark Side of the Moon" to "The Wall" Pink Floyd's music,...

The Ultimate Police Fan Survey
Are you a fan of The Police, and band members Sting, Stewart Copeland and Andy Summers? If so, here's your chance to sound off with your opinions on the band...

The Ultimate Van Halen Fan Survey
Van Halen is one of the most popular and long-lasting hard rock bands today. Their hit singles like "Jump!", "Ain't Talkin' 'Bout Love", ...

Who Is the Best Drummer in Rock Music?
Rock Music wouldn't be rock music without great drummers - and rock music fans love to debate who is the greatest rock drummer of all time. Well, now's your...

Your comments on this tribute page to The Hoosiers is most appreciated! Please let me know what you think of the band, or if this page has gotten you more interested in their music.

Feedback Welcome! - Did You Enjoy My Tribute to The Hoosiers?