After having given birth by way of natural delivery on two previous occasions, the thought of a Caesarean delivery was not only alien to me but abhorrent. But with my third pregnancy this was to be considered, not only as an option, but a very real possibility that it was the only way that would be successful in delivering my child alive.

From the moment of conception, or a least from confirmation that she is pregnant, a woman prepares herself for the birth of a child. Women have been delivering babies from the beginning of time. For me, the only way to do this was the natural way through the birth canal.

Due to various complications in my pregnancy, I felt that, in a way I had been asked to play God as to whether or not my child would have a chance of being born. For me the options were always clear that it was never up to me. If a child is conceived then a child must have every chance of being born alive. Following the diagnosis of an eleven week ultrasound showing mild to severe abnormalities, the decision rested with me. Should I abort or should I continue with the pregnancy? After considered discussion with the father of my child as well as family and friends, I chose to continue.

The decisions are out of my hands and I am prepared for surgery. In a way it is a relief to hand over the controls to someone else but I am distressed that I have to be given a general anaesthetic for this emergency Caesarean.

I don’t want my baby to be brought into this world while I’m sleeping, but I have no choice. The tears form in my eyes and run all over my face. Willy is walking beside me as the attendants wheel me toward the operating theatre. He squeezes my hand then reaches down to wipe my tears.

“Willy, can you come with me? I know it is a lot to ask but I would feel so much better knowing that you are there when our baby is born.” I plead as one of the theatre nurses arrives.

“Oh, we don’t allow anyone else in the theatre…”

“But if I was having an epidural he’d be allowed in?” I guess my anxiety was obvious to everyone within earshot now and I could hear the panic in my own voice.

In a matter of a few minutes, Willy was dressed from head to toe in the theatre cover alls and ready to be at my side throughout the birth. As the anaesthetist placed the mask on my face I started to relax, counting down from ten, but I think I only made it to eight.

Coming out of Surgery

“Karen are you awake?” Well, I am now I thought to myself. “Karen, can you hear me? Are you in pain?” The soft deep voice was so insistent I had to open my eyes to find out where it came from.

“Ah, yes, no, maybe a little pain.” This dialogue continued for a while. The nice man with the soft voice asking me to put a number on my pain. I started to focus and realised the operation was over, I was in the recovery room.

“Oh, my baby, what about the baby?” Another face appeared above me, a female nurse this time.

“Hasn’t anyone told you? Your baby’s fine, Willy has gone with her to the Intensive Care Unit,” the nurse says in a matter of fact way.

The tears start again and without Willy here to wipe them away, I simply let them fall. But now they are tears of absolute joy. Two sons and now a daughter. I feel so blessed and at peace as if all my dreams have come true. I drift in and out of sleep, that wonderful dozing that comes after surgery, before the drugs wear off and the pain takes over.

It is many hours later before I finally meet my baby face to face. She is beautiful.

She's No Turnip - For Emily 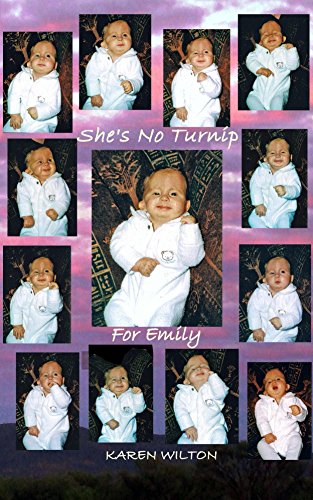