DNA Found out My Missing Great Grandfather Was a Viking!

DNA and my grandfather.

We all know our family don't we? Well not necessarily. Sometimes a missing link will pass down through our families genealogy and cause a puzzle that we just can't figure out.

Then along came DNA testing. Its something that I have been wanting to test for many years. Now was my chance!

Would I figure out who our missing great great grandfather was? I was certainly going to try!

When I did eventually receive my DNA results I was stunned! I was not expecting that! 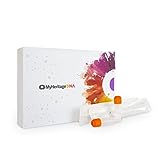 MyHeritage DNA Test Kit: Genetic Testing for Ancestry & Ethnicity Covering 2,114 Geographic Regions and DNA Matching to Relatives
Possibly the best of the DNA test kits. I have tried others, but they don't seem to have the same amount of info. Well worth it!
Buy Now

I have always believed my family were just English. I had been doing my family tree on Findmypast for a long time and never discovered anything interesting. Apart from my great Aunt who was the Sleeping girl of Turville on my mothers side, the Needle makers of Long Crendon on my Fathers side, and of course my lovely uncle who was shot down in the second world war.

Sergeant Ronald Stone What really happened on that day?

But nobody else seemed to pop up outside England itself.

Of course there was the occasional spark of interest when someone had a strange name, or the family came from another part of the country. But that was it.

So when I sent off for my DNA kit from MyHeritage I wasn't that excited to be honest.

I had noticed other people's results from England were along the lines of West Europe, or Scotland and Ireland.

So by the time I got my results I was sitting with my fingers crossed hoping that it would be something interesting.

And I was right!

When I opened the link on the screen I was surprised and pleased to see so many different countries.

Well for a start I was shocked at the rest of the results! Middle East? Ukraine?

Then I saw Norway!

Don't just send of for your DNA. Make sure you follow it up with Gedmatch and Facebook searches!

Quickly counting back the generations I realized that I had hit the jackpot! Now to find out who he was.

The next thing to do was check my Matches. Myheritage and other DNA sites will always match you with other people who share your DNA. Because of the high Percentage of DNA I deliberately looked for Scandinavian matches.

And there were a lot of them!

What do I do now?

Then I got lucky. An online friend mentioned Gedmatch. Its a site where you upload your raw DNA and they match you with people who have your similar DNA. I was astonished to see how many countries I matched!

Going even further I managed to track down certain names that seemed to be the same over and over again.

I discovered that there were groups on Facebook that dealt with DNA matches.

Thanks to Gedmatch which gives you a personal number you can talk to people on these sites, such as Norwegian DNA match, and see if you can match each others DNA.

After a few weeks of chatting to various people on the Irish, Scottish and Norwegian sites we realised that it wasn't going to be that easy.

The reason was that most of us had English Irish Scottish and Norwegian DNA.

In a nutshell we could all be matching on the English etc and not the one we were looking for.

Then I suddenly got a break!

A lady named Debra popped up on my Norwegian Matchbox. The Matchbox is where you put your DNA and it finds your matches. She was the only one that I hadn't seen before on any of the others. Which meant that she had to match my Norwegian bloodline!

And boy she did just that! She gave me names, dates and where he lived!

To be honest I was a bit skeptical to start with. Could it really be that easy? But yes it seems so. According to my FTdna most of the Norwegian or Scandinavian matches have those names.

So maybe this Larsen man was really my relative?

His name was Martin Larsen. He was born in 1864 in Larvik Norway! I couldn't believe my luck!

The trouble with Norwegian names is that, unlike us they don't carry the same name through generations. For example, my dads name was Turner, his dad was Turner and so on.

Norwegian names are based on two things. The Father's first name, i.e. Oluf, and the second is whether they have a son or daughter i.e. son or sen, daughter, is datter.

They then put the two together, and it makes Olsen or Olsdatter.

So you can imagine my relief when Debra told me about her and mine Norwegian ancestors!.

Each generation has a totally different name. In fact another of my matches kept saying the name Olsen and I said no, not the right one. But of course it was right.

I did have doubts that Martin was my great great grandfather, as I can't prove he was in England at the right time. But its definitely one of the his family, maybe one who still lives in Norway, or even Britain. Just got to check some more.

The Larsen family lived in Larvik Vestfold Norway. My ancestor was born Martin Larsen in 1864. Soon after that branch of the family moved to Australia.

But there are still family living in Larvik Norway which I hope to approach in the near future.

Just for fun I am going to add my Gedmatch number here, just to see if there are any of you matches to my DNA!

So go ahead, take a peak, you never know!

A real live Viking in the family (sort of!)

I am so pleased that I found my Norwegian match, albeit that it may not be the exact Great great grandfather but at least its the same family.

To be sure I have to do some more digging, but I think its the right family member. I will carry on trying to find the exact cuckoo in the nest though and add it here when its done.

And to be honest, the child in my is puffed up to find a real life Viking in the family!

How amazing was that?

Thanks to Debra Le Bhers for all the amazing info.

Now that's done, its off to find my Irish, Scottish and Jewish GG's! lol!

I am loving my DNA!

Have you found your long lost Ancestors? Why not tell me about it in the comments below?