Whose Child Is This? - The Fight for Baby Jessica Deboer/Anna Schmidt Adoption Case 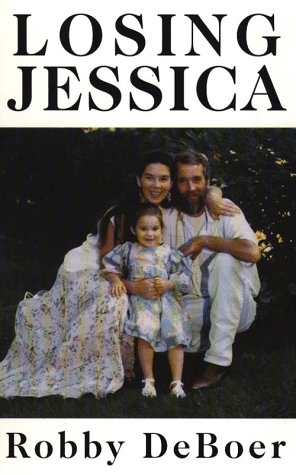 I watched the true movie called Who's Child Is This? The War for Baby Jessica.

After watching it I had quite mixed emotions. On the one hand I cried when I saw the little girl being taken away from all that she knows but I also felt for the birth mother who was fighting to get her baby back.

I started to research the real story behind the film. We all know films are never totally honest with the facts after all that is not what makes the ratings. Here is what I discovered while researching this case.

Robbie Deboer got an infection while on her honeymoon which resulted in her having to have a hysterectomy. This was obviously very traumatic for Robbie as it meant she would never be able to become pregnant.

Later, Robbie heard from friends in Iowa that a woman named Cara was pregnant. Robbie was told that Cara didn't want the baby and so Robbie and her husband Jan began proceedings to adopt the baby from birth.

On February 8th 1991, Cara gave birth to a baby girl. Delighted by the news, Robbie along with her mother drove up to Iowa to see the baby and start the adoption ball rolling.

Robbie received signed parental release forms from both Cara and the baby's apparent father Scott. The Deboer's were ecstatic as they finally had the baby they always wanted. The Deboer's called their new baby Jessica.

A few days after bringing baby Jessica home they received a letter from birth mother Cara which read,

"I know you will treasure her and surround her with love, god bless you all."

However just days after receiving this letter it all started to go very wrong.

The Fight For Baby Jessica Begins

Cara, who was 25 at the time of the birth, had lied about who the baby's father was. Cara had originally said it was a man named Scott but the father of baby Jessica was actually her ex- boyfriend Dan Schmidt.

After giving her baby to the Deboer's, Cara went to see Dan and told him what had happened. Cara had already been having second thoughts about her decision when she went to a support group for birth parents and heard the hurt other mothers felt after giving up their children.

Meanwhile the Deboer's were in complete shock. They believed they had done everything right. They had signed all the relevant forms and thought Jessica was officially their daughter only to discover that they may lose the baby they had already bonded with.

Before a decision could be made the courts had to first prove that Dan Schmidt was in fact baby Jessica's real father. However the paternity test results took six months to come back meaning The Deboer's bonded more with Jessica.

In the meantime, birth mother Cara missed out on more of her daughter's life. A lot of people say that the Deboer's should have given Jessica back to her mother at the very start. However, by law the court could have placed Jessica into foster care until the paternity test results came back in. Surely neither party wanted that for the baby girl.

When the test results proved that Dan Schmidt was indeed the baby's father the whole adoption case was voided because Dan had never signed a release form. On the 27th December 1991 the Deboer's were ordered by the Iowa court to hand baby Jessica back to her natural parents.

It didn't stop there though. Instead of handing Jessica over while she was still a baby the Deboer's decided to fight to keep Jessica. In doing so they were legally allowed to keep Jessica while the appeals proceeded.

The Deboer's argued that Dan was not a fit father as he already had two children that he doesn't see. The Deboer's couldn't understand why Dan all of a sudden wanted to be a father to Jessica.

In January 1992 Iowa heard the supreme case but the appeals dragged on for months. During this time Dan and Cara got married and just wanted their baby girl home.

When the case went forward, Iowa court upheld the lower court hearing stating that although Dan Schmidt's fitness as a parent was questionable and the court was tempted to leave Jessica with the Deboer's for the sake of the child, Dan's rights had priority over Jessica's and so the child must be handed back to the Schmidt's with immediate effect.

Despite the ruling the Deboer's still refused to give baby Jessica back and moved their case to Michigan where they won their first victory.

In February 1993 when Jessica was two years old, the Michigan Court ruled that Jessica should stay where she was as they believed moving her from the only parents she had ever known would have a terrible effect on her. The Judge then told the Schmidt's that if they gave Jessica up they would become heroes, sacrificing their hearts desire for their child's well-being. However the Schmidt's declined to give up the fight for their little girl and in March 1993 the state appeals court threw out the Michigan Judges ruling.

The Court stated that the Deboer's had no right to ignore the first Iowa ruling which was already in place. On July 1st 1993 the state's highest court confirmed that Jessica would be returned to the Schmidt's in a month.

During the court battles, Cara Schmidt had given birth to her second baby girl Chloe. The Schmidt's said that when Jessica returns to them her name would be changed to Anna Lee Jacqueline clausen Schmidt. Some people argued that changing the little girl's name at 2 and a half years old would be very confusing and upsetting for her. However the Schmidt's argued that Anna was always the name mother Cara wanted for her little girl and they didn't like the name Jessica.

The Schmidt's went to visit Jessica at the Deboer's eight times before she was handed back. Little Jessica was last seen screaming and crying when she was taken from her adoptive parents home.

The Deboer's were the only family and home that Jessica had ever known at that time. Just six months later and now back with her birth parents and baby sister Chloe, Jessica seemed very healthy and happy.

This was a far cry from what the courts and the Deboer's said would happen to this little girl if she was returned to her natural parents.

Anna Schmidt now 19 is doing really well. She is living with her Mum Cara and partner and her younger sister Chloe.

Anna still sees her father Dan on a regular basis. Anna says she has no memories of her time with the Deboer's and feels angry towards them for what she calls, "legally kidnapping her."

Anna believes that the Deboer's caused her birth parents to miss out on her baby years. To this day the Schmidt's still don't have any baby photos of their daughter as they are all owned by the Deboer's.

Anna says she has no wish to contact the Deboers and finds it creepy that Jan Deboer keeps a portrait of her on his mantelpiece.

Anna's mother Cara said the day the nation saw Anna crying when she was being taken from the Deboer's home was because they had cruelly kept her little girl up all night and panicked her about all the cameramen outside. Cara says she will never forgive them for that.

After Jessica (Anna) was returned to her natural parents the Deboer's adopted a little boy named Casey. However, the upset of no longer having Jessica in their lives coupled with the strain that the court and media battles caused, they got Divorced. The Deboer's later remarried but then divorced each other again and now remain separated.

Should the Deboer's have handed Jessica back at the begining?

So there is the story that kept everyone griped and every adoptive parent panicking that their child could too be taken away from them.

But who really is at fault here? The Deboer's just wanted to adopt a baby. They were just trying to love Jessica and give her a good home. Should they have given her back at the start?

I would have said yes until I read the court news and found that a judge had clearly stated, if the Deboer's had decided to give Jessica back, then she would have probably remained in foster care until Dan Schmidt's paternity results were in.

Why would they want to unsettle the poor girl further? On the other hand they could have given Jessica back when the results were first in. The Deboer's were ordered to give Jessica back to her birth parents but instead of giving her back they carried on fighting it. Should they really be criticized for this? Don't we all fight for what we love?

I also felt for the birth parents. Cara was depressed and she had no legal representation when dealing with the private adoption. Cara said that she didn't want to shame her family as the neighbours were very judgemental where she lived.

But then there is Dan who didn't even know he was the father. Dan never even got the chance to stop the adoption going through until baby Jessica was already two weeks old.

As soon as Dan found out the truth, he tried to put a stop to the adoption straight away. Cara however had the option but she chose to lie about the father and have her baby adopted to stop the neighbours talking about her. She gave the Deboer's her baby and later sent them a letter, writing "I know you will take good care of my baby girl."

However Cara eventually changed her mind and chose to take her daughter back from the Deboer's. She was a Mum who yearned for her baby and wanted her back.

There will always be wrongs on both sides but I think the real victim here is of course the child, Anna Schmidt (Baby Jessica).

Despite Anna's traumatic start in life and being in the middle of an emotional game of tug of war; I hope Anna can find true happiness now.