Gypsies: An Indian Prince, And Two men And A Rat!

Oh Dear God Has He Got Any Brains?

You know the saying, 'Stupid is as stupid does'? Well that was my life with Jake the failed fingersmith. If you have no idea what on earth I am talking about, it's all written down in the hub entitled Gypsies but Sometimes Thieves.

The link is below. Long story cut short, Jake, my husband thought he was a great and masterful thief, when really he was just completely useless! But of course it doesn't stop there. That was just one of his great escapades. One fine day, as the saying goes, we were sitting outside our Caravan. Jake was doing what he does best, not a lot. He fiddles with something to make it work better, but just breaks it instead. And I was tackling the mangle, trying to get the sheets that I had just washed, as water free as possible.

I moan. I know what's coming. Well I have a good idea. It's one day away from Halloween, and the Gypsies liked to play tricks on each other. Just like us Gorgies, but there was one difference. It usually involved money, or belongings. They would set up a test, and whichever one of them won, they would be given a few quid or an old banger (car) of their choice. But it's got to be a good idea. The plan was, you had to do something, or say something that the other's didn't know was a Joke or actually you. For example, phone them and say that they had won some money. Or, more likely, tell them over the phone, that someone had stolen their car and they had better come quick! I think you get the point. And, unfortunately, so did I.

'Oh yeah, what's that then?' I peer at him over the mangle. Wait for it. After last year I was dreading it. He decided to remove a wheel from one of the cars in the middle of the night. He forgot about the dogs. Ten If I remember. Never again.

So I stared at him, waiting for the light to come on in his brain. It didn't happen very often and when it did, you could hear a sort of grinding, like gears starting up after a long time.

A grin appeared on his face. 'You know that old Indian costume that my uncle Alby gave me after his cousins wedding? I am going to put that on and give Chris a scare, it'll frighten the life out of him, when I knock on his door'.

I think. In fact I think for quite some time. What could possibly go wrong with that? Now for anyone who doesn't know, my husband's ancestors came from India. In fact if you didn't know any different, you would think he was Indian or Arabic. I found that out when he nearly got married off in Morocco by mistake, but that's another story!

Not Quite, But Near Enough!

'Okay, that's sounds quite good, so what's the plan?' I ask.

'Well, Chris said the other day that because he got behind in his rent for the caravan, he was scared that they would send someone round'. He grinned. Right. I thought. No danger there then! But knowing Chris, he will take it as a joke and realise that it was Jake messing about. So finishing of the mangling, I said, 'Right, well get indoors and we will find the costume out and put some finishing touches to it'.

Happy days. This was going to be fun, just seeing his face when he opened the door. What could possibly go wrong?

The next night, there was a full moon, and after waiting until everyone had settled in their caravans, Jake disappeared in the bedroom to get changed. I waited in trepidation. 'What the hell is he going to look like?' I thought. I presumed in my innocence that he would just come out wearing the traditional dress of an Indian, and maybe wear something around his head. Oh no. Not that simple!

The door opened and Prince Jake emerged! 'What do you think?' he grinned. All I could see was his eyes and teeth, gleaming at me in the small light coming from the gas lamp. 'What the hell?' I started.

There, stood in front of me was a full on Indian Prince with a Turban and jewelery, wearing a full length old fashioned blue robe. 'Wow' I said. 'He is never going to know it's you'.

'I know, great isn't it?' He started for the door. 'Stay here, or else he will know it's me'. He walked down the steps of the caravan and headed of into the night.

I was left peering out of the window. It was darker now, and the moon was covered in clouds. I couldn't see a thing. Then a light came on, and I saw Chris open the door. I couldn't hear anything, but all of a sudden I saw Chris waving his arms around madly, and Jake walking backwards away from the caravan. As they got nearer, I heard Chris yell  'And get away from my caravan you stinking money grabbing b..............! Next second I saw his fist come up, and with one almighty punch, Jake took of and sailed through the air! 'Oh my God' I yelled, and ran for the door. By the time I got to the caravan, Jake's nose was pouring blood and Chris was about to hit him again! 'CHRIS! STOP, IT'S JAKE! FOR GOODNESS SAKE!

He stopped. Then peered at Jake. Getting closer, he leaned down and with a look of sheer disbelief, started laughing! HA HA HAAAAAAAAA! YOU BLOODY PLONKER! The last thing I saw, totally embeded on my mind forever, was Jake sitting on the grass, his hands covered in blood where he was holding his nose, and a look of complete startlement on his face. Suddenly a little voice emerged from Jake. 'Does this mean I won then?' Chris, turned and with a last laugh, said, 'No you idiot, Halloweens tomorrow night!

Ho Hum. Useless is As Useless Does!

A few days later, and one very swollen nose to prove his stupidity, Jake decided to make amends and go and see Chris. Fine I thought, get him out from under my feet. Cleaning up the van only took a few minutes, so I decided to go and join them at Chris's caravan. Opening the door, I realised that they were both walking up the path. 'What are you doing?' I asked.

'Ah we just came back to mend the boiler', said Jake. I looked at Chris. 'Alright?' I said, warily holding the door open for them. 'Yeah, fine thanks' He said, smirking, and pulling a face. 'You didn't have to hit him that hard you know', I glared. He just smiled. 'I did'! and then pushed past me. Grrrr! I could have hit him! So I decided to go and see Meg, his wife, and have a cuppa. Knocking on the door, I yelled, 'Doors open, can I come in?' She peered around the corner of the door, 'Yep, but no Indians!' Ha Bloody Ha!

We enjoyed a good natter and a lovely cup of char. (tea). The kid's played happily on the floor, and I thought, 'well, this is better, a bit more civilised'. I should have kept my mouth shut. Two minutes later, there was a banging on the door.

'It's a bloody great rat, it's got in my caravan, and we can't catch it'. Jake rushed in, rushed out and straight back over to my caravan.

'Oh, great, now we got to catch a rat!' I mumbled and moaned, and headed out the door. 'Coming?' I said to Meg. 'OOh, wouldn't miss this for the world!' She laughed.

Rabbit Stew And A Penny Or Two. Maggie Smith-Bendell 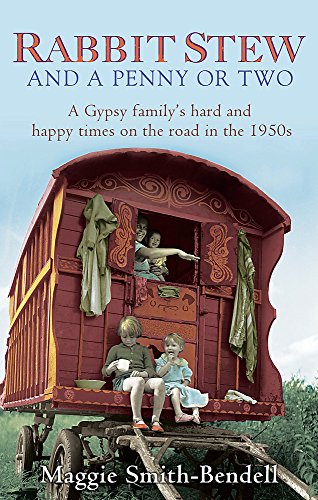 Rabbit Stew and a Penny or Two: A Gypsy Familys Hard Times and Happy Times on the Road in the 1950s
Buy Now

I will never forget it. As long as I live and breath. I can see it now, in full technicolour. And believe me when I say, I will never let them forget it either! Meg and I walked over to the van. 'Where are you?' I yelled around the door. 'In here', Came Jakes muffled voice. 'They're in the bedroom' I said, 'Great, now the rat's going to get in my bed' .

'Won't be the first time I had a rat in my bed!' Meg giggled.

I started to laugh, and by the time we got to the bedroom we were in hysterics! But that was nothing compared to the scene that was there before us.

Two grown Gypsy men, hard as nails that would eat you for breakfast if as much as you looked at them the wrong way, where standing on the bed, my bed, I hasten to add, holding onto each other! And all we could hear was, 'where is it? where is it gone?' 'You go get it!' 'No, you go and get it, it's your van!'

Meg and I just stared. Before we had a chance to say, 'You bloody cowards!' A movement caught my eye. In the middle of the floor, was the cutest little bundle imaginable! It was a field mouse. With big eyes, and little paws. It was shivering. Scared out of it's wits, because two hulking great men kept screaming at it! I bent down and scooped it up. 'Come along little fella, I won't let them nasty men get you'. Holding to my chest, I turned away with Meg and walked out the door.

We never spoke as we let the mouse go. We watched it scurry away, and then she turned to me and said, 'I think we need a drink, shall we go to the pub and let them babysit?, you never know, we might find ourselves some real men!'

Fascinating Stories About The Gypsy Way of Life

Gypsy Horses and the Travelers Way: The Road to Appleby Fair
Buy Now