Gypsy's but not Tramps and Thieves 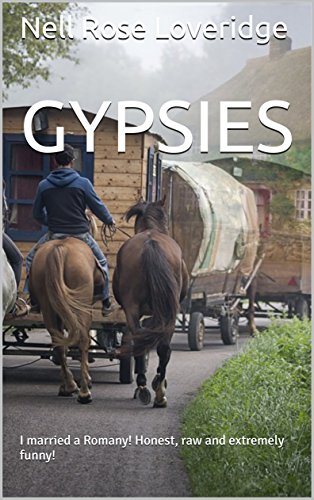 GYPSIES: I married a Romany! Honest, raw and extremely funny!
If you enjoyed this preview, then you can read the whole hilarious story at Amazon.com And Amazon.co.uk
Buy Now

I grew up in a normal working class home, and went to school just up the road from where I lived. My mum and dad presumed I would marry a man that was similar to me, and up until the age of twenty I dated men similar to the kind that they approved of. Until one day I turned up at the house with someone that they took one look at and just shook their heads.

When he was in the kitchen making a cup of coffee, my mother said to me. You have got to be joking. And my dad just shook his head and said, oh Ena leave her alone, he's probably very nice. My dad was like that, give everyone a chance until proven wrong. My mum on the other hand, wasn't so polite. He looks like a Gypsy, she hissed. I don't know whether she was being insulting or very astute! But yes he was a Gypsy, or Romany as they prefer to be called. I think my mum was remembering the old saying, which was told to us when we were small. If you don't behave I'll give you to the Gypsies. I must have been a very bad girl.

Now you're probably thinking, how did she know what he was? well, he had the looks. I meant dreamy. she meant swarthy and untrustworthy! I meant romantic, she meant lazy and a crook. so as you can see, it didn't get of to a very good start.

At that age, just turning twenty, I thought i knew it all, and the more my mother said no I said yes, she said leave him, so I went and married him! Neither of us had any money, and much to my mother's shame, when went to live in a caravan on a site, in the next town. Talk about cliché, as my mother so aptly put it, ' you only need the horses and the pegs and you will be well away'.

Actually she was nearly right. The site that we lived on was full off Romany's, but there were a few Gorgies, as they call normal people. In the old days they called us Giorgio's. There weren't any caravans with horse's, the old caravan's were called Vardo's, because this was the eighties not a hundred years ago. But the similarities were still there. Scrap metal was a day to day encounter, men sitting on the steps of the vans, with their hammers and Stanly knives stripping copper wire, or burning off the rubber and tying up the clean copper. Cars and vans delivering brass and iron to be sorted and put in boxes to take to the scrap yard. The women always seemed to wear brightly colored clothing even though the younger ones wore modern clothes, the older ladies always wore knee length pleated or straight skirts, some with aprons, others with big belts.

And the earrings, I have never seen so many big bright hoops and the majority always wore scarves around the hair. The one thing that absolutely amazed me was their kindness. After we had moved into the caravan, a stream of women would knock on the door with presents for the caravan. Curtains, tablecloths, cups and saucers, bedding even makeup, just to make you feel welcome. When I showed my surprise, they said in a puzzled way, well girl, you are one of us now. As though it was normal for everyone to do this.

The other thing that surprised me was the cleanliness of their caravans. They were spotless. The carpets were bright and clean, very thick pile. Their cups and saucers had gold rims around them, and I was always afraid to go into there vans because i thought I would make them dirty with my shoes!

We were always broke, but it wasn't through lack of trying. Jake my husband looked for jobs everywhere and sometimes worked for months, but at other times he lost his job and we were back to the scrap metal. I did a bit of cleaning, but by now my pride and joy had come along, my son, and I stayed at home and looked after him. At the back of the caravan site was a winding road that led to a village called Owlswick, which led alongside a small stream, and because it was a small road there were not many cars along it so to get to the scrapyard there,Jake made a barrow about six feet in length and put two wheels underneath towards the middle. With a couple of handles at the front, we were well away. I sat in the middle, and my son, who was about eighteen months old by this time, sat at the front and Jake pushed us all the way to Owlswick, surrounded by a ton of scrap metal! Ah, those were the days!

I remember one time we went there, I met a gypsy woman who pulled into the car park, and came over to us. I didn't know her, but she had the gypsylooks. Dark skin and long black curly hair, earrings jangling around her ears. 'well dawdy' she said, was you doing here with a chavi in a barrow then? she said. chavi?, oh I thought, she means a baby. It takes a while to understand the accent, the only way I can describe it is like skimming a stone across water. The words seem to jump and not quite touch the ground.

Anyway, I told her what we were doing and she said, Well, you come a me, and I see what I got in me boot o me car,' so I followed her and she opened the back. Reaching in, she pulled out about three bags of brand new baby clothes, and handed them to me. That's for da sprog, and I won't take no for an answer, we's has to look after our own' she said, giving me the biggest smile, and with a wave, got back in the car, and drove away. I was astounded and humbled. When Jake came back i told him what had happened. He just looked at me and said, Yeah well that's what we do' and smiled. Every year when the fairground came to town, we would get dressed up in our finest and take my boy along to see what was going on. We never paid a penny, because it was run but gypsies and there is a knowledge of who belongs to the community. The men are all friends and even when they don't know each other, after ten minutes of talking the find out that Ben knows Fred and Joe is related to Jon, by marriage or cousins once removed! and that's it everything is automatically free. My son went on all the rides, got free candy and had a whale of a time.

The only time I felt scared was when we went to visit Jake's aunt Janie, we drove out into the countryside and instead of turning left, we turned right by mistake. Going into what we thought was the proper Romany site, we found that we had made a mistake and gone into the diddicoy one, as Jake called it. We heard shouting and dogs barking, and looking out of the window I saw two men approach us with shotguns. I was terrified. But Jake rolled down the window and spoke to them. Their faces were ugly with anger, until he told them that he wanted the other site, spoke to them in Romany, and English slang, and then to my relief, the anger turned to smiles, the guns went down, and they yelled at the dogs to be quiet. They then pointed out the right road, and we headed off, much relieved. As we drove away, i looked back and saw a horse box with a window high up in the side, children were playing and a little girl was staring at me with her fingers in her mouth. She was filthy, with no shoes and a skimpy dress, even though it was winter. I couldn't believe the difference. Jake told me that they were only part gypsies, but mainly gorgie, who chose to live this way because they didn't quite fit into the main gypsy way of life. When we reached aunt Janie's caravan, it was like walking into a small compact palace. I had learned something that day. If we had been gorgie's, what would have happened i wondered. I shall never know.

We had to move when my son was two years old as the van wasn't big enough for us. so we went back to being house dwellers as they called it. I couldn't get used to it, bricks and mortar made me feel claustrophobic, and the people were normal, everyday people. Oh, don't get me wrong, they were very nice, but I missed the communal friendliness of the Romany's, the laughter and in jokes, the generous nature, and most of all there was never any bitchiness. If they didn't like someone, they wouldn't say oh keep away from her or him, they would just smile and say' well now i is akeeping away from her, but yous can make up your own mind now, an' anyway, thems not all bad, my dear'

it's twenty years now I have been a house dweller again, but if I see a gypsy woman selling heather in the street, i will never pass by without giving her some money for a sprig, and I always take time to stop and have a chat. I sometimes get odd looks, but i smile a secret smile and think to myself, I know the truth, i know what you've been missing. you see a gypsy selling heather, being a nuisance, not even talking intelligently with a posh accent. I see a lovely kindhearted lady with a touching smile, grinning at me with pleasure, because I am giving her something she doesn't get very often. A bit of respect. But i know the secret you see, so I'll let the gorgies get on with there life, in ignorance of these wonderful people i had the privilege to meet.