Here I sit on a rainy, dark and gloomy Wednesday morning in New York. I just finished my morning coffee and watching one of my favorite shows, Parenthood on the DVR. I’m not sure if it’s the weather or my 41 year old hormones making my feelings run amok but I find myself crying (which in itself isn’t that unusual for I am a mushy mommy). I am completely bawling during this particular episode. So many emotions are stirred up and a lot of raw deep-seated feelings brought to the surface.

In this particular episode two sets of parents are currently dealing with teen angst and rebellion. Of course (as is seen in real life) each set is handling the problems with their teens in very different ways. The main topic is the difficult time of distinction when a parent decides if they should let go or hang on like crazy.My favorite character, Sarah, gives a very moving speech to her brother Adam who feels they just need to let things run their course. She says, “You don’t give them space. Just when they tell you they don’t need you anymore is exactly when they need you the most. You have to fight it. You have to show up. It’s when they’re pushing you away, it’s when they’re telling you they know better…that’s when you have to show up.” I always find myself reflected in these episodes because it’s something I find myself struggling with a lot lately. In a flash I went from holding a toddlers hand while cradling an infant to raising two young ladies ages 15 and 11. My heart strings are being tugged in a very palpable way, where I literally feel an ache in my heart every time I think of the fast approaching future of having to let my girls go and navigate their way out into the world.

It seems as if time is slipping through my fingers. Uncertainty hangs in the air and incredible amounts of melancholy take over my thoughts. It’s a terrible thing knowing everything I never had growing up and wanting so much more for my children. At times I wish I could erase those memories because they weigh so heavily on me and make me question everything I do. What I want to give my children goes beyond the material realm. It delves into the recesses of the spirit of a long gone little girl forgotten by her father, wanting to be safe, secure, loved, validated and acknowledged. I hate the fact that time has done nothing to erase my feelings of abandonment and need for father-daughter moments that never materialized.

Logically I see that because of my own hurts I tend to over compensate with my girls who are fortunate enough to have two very involved and loving father figures in their lives. Both their father and step-father provide the emotional support they could ever need. But a mother’s heart knows no such logic. Regardless, I still tend to take on all of the weight of their total well being, again finding my actions influenced by my own dependence on my single mother who take care of all my needs taking on the role of total nucleus, being both mother and father.

How I wish that with the “What to Expect” baby books they would have bundled a “How to Prepare for Letting Go” book. Infancy lasts but a moment. Preparing and molding a child into an adult proves to be a much greater and daunting task than diapering, burping and nap schedules. Why is it that with so much information at our fingertips parenting is still such uncharted territory? Similarly, many women still don’t share the truth of how hard motherhood can be with each other as if somehow speaking the truth would change someone’s mind about becoming a mother and we would rather paint a rosy picture than share the truth so as not to spoil it for someone else. I would have benefited greatly knowing what my mother went through when she was parenting me. I’ve tried to correct this lack of information with my daughters sharing with them in an age appropriate way what pregnancy and delivery is like, the sleepless first several months (make that first year for my youngest, who was a night owl), the terrible twos and fantastic fives, the colds and thankfully only a few stitches. I find it necessary to tell not only the beauty of being a mother but the not so pretty moments have a lot to tell as well. You certainly can’t cherish the good without being thankful for getting through the bad. Honestly, I am truly in awe of my children and beam from within at how accomplished they have already been in their young lives. They have been fortunate enough to fully experience the American family dream. They’ve grown surrounded by loving parents, grandparents, extended family, friends and lots of pets. They know the security of living in a house with a backyard. Both have achieved a lot in school and in sports and most impressively along with that, they’ve flourished and grown through a divorce and the experience of a blended family.

It would be so wonderful to stop time; just to see them remain in this special block of youth, unhampered by the high and lows of adult love and loss, the demands of work and the day to day struggles of life. Yet I know that is a self-serving and selfish wish coming from a place of adult fear. Fear of not having a purpose anymore, of not being needed or wanted. So this is where the difficulty lies. The phrase “letting go” speaks volumes on its own. It’s an act that involves a conscious choice of allowing, giving yourself permission (letting), to send your hearts greatest treasures out into the world with all your hopes and dreams that all the love you put into that treasure is received and reciprocated tenfold. Truly our roles as parents would be a life’s work unfinished if not for the difficult act of letting go. 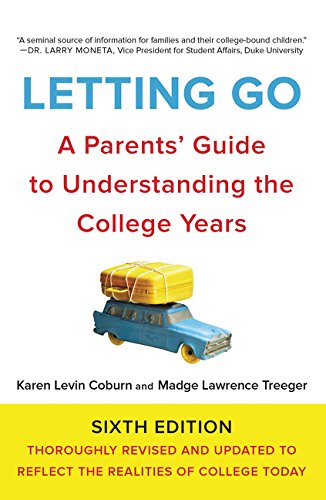