Georgianna was from the famed clockmaker and print family Ives. Her father and grandfather Lawson C. Ives were in the clock making industry and inventors for clock mechanisms including various other companies including Cotton Linen, Threads, Copper and Silver. From what I have read, they were not good business men, however, their inventions and patents used for clocks, were some of the first...They were also noted for their generosity and philanthropy.

For years I have seen L. C. Ives clocks for sale, of course now they are way too expensive for me...I wish I'd bought one years ago.

Note: Scraper Protection: If you see this page anywhere else on the Internet besides here...PLEASE contact me...Thank You ~ Delia Pacheco

She was a Baroness

Georgianna was quite beautiful, her hair was snow-white by the age of 25 (thank goodness I did not inherit that!) she had three beautiful sisters Edith, Grace and Annie.

From what I‘ve been told, in the 1800's wealthy American families would send their daughters to Europe to find wealthy husbands...and most likely this was for Edith, Grace, Ann and Georgianna. They moved to Europe and married there, one in England, one in France and my grandmother in Germany. I believe two of them are buried in Europe, my grandmother in Garmisch Germany, where I saw her for the last time.

My grandmother married Ludwig Adolph von Meyer, a Baron giving her the title. I’m not sure for the rest of her sisters titles, but Edith Margaret Ives married Robert John Ralph Boreel (Dutch diplomat) This being her second marriage.

An email from Ancestry.com came, saying, for a few days you can go through the immigration and travel section of the site for FREE...Although I have been there many times and searched I never found much, but within minutes I discovered her photo and passport application, she being about 58...it was noted she was coming back to the US for a visit. I discovered that she still was an American citizen and lived in Lucerne Switzerland traveling through Europe, but no permanent address. When you retain your US citizenship you must come back every few years. I know that they had a vacation Villa in Switzerland but didn't realize she lived there...her other residence was in a huge Hotel in Dresden.

When my husband and I visited Dresden we sat in front of this most beautiful Hotel, commenting on the elegance...When we came home, I found out that this Hotel was where she had lived! Wish I'd known this when we were there, I would have gone inside.

I was happy to find a ship manifest on Ellis Island.org revealing that my father and my grandmother had visited his Aunt Sophia Owen in New York Oct. 16,1906. I also noted that my grandmother called herself Georgie. My dad was an 18 year old student having more then $50 with him and that he had been to the US before. The ship they came over on, was the S.S. Kronprinz Wilhelm. (pictured)

After my grandfather Ludwig died, grandmother took up living with her assistant-maid in an elegant Hotel in Dresden....like I mentioned before, she also lived in Lucern, Switzerland and came back to the US because she had dual citizenship. Her time was passed traveling all over Europe...until the war broke out.

A memory of my paternal grandmother

This brings me to a memory of my grandmother and quite frankly, not a "feel good" memory...you see I was scared of her. She would grab you with a death grip and order you to do something. I remember when visiting her at a German Kur resort where she lived, she would ask me to go and get some candy from a closet, of course I obliged as chocolate was a rarity during the war...in this closet to my surprise were many Hershey Chocolate bars (most likely from American GI's)

I grabbed a bar and delivered it to her. She then very carefully unwrapped this treasure with her bony fine fingers, wearing diamond rings that were glistening in the sun...and then to find the chocolate almost white from overexposure and age. She painstakingly broke off one square and handed it to me, and one square to my twin sister. With a smile on her face she ate the rest of the candy bar. Then ordering us to kiss her hairy thin cheek to thank her... well at least I have this memory...note, a child's memory...I'm sure this is most likely why I love chocolate so much, and myself being stingy with sharing it.

With a chocolate bar

One other memory of my grandmother, was her love for Lilacs...It was known that she would always wear Lilacs on her hats.

Supposedly when she got married, the streets to the Frauenkirche (church) in Dresden was lined with Violets and Lilacs...as well as the decorated carriage.

Certainly there must have been a photo of that day, after all they were were always written about. Most likely the 1945 firebombing of Dresden must have destroyed all the newspapers and photos. She lived in Germany during the war, so most likely lost it all, as we did. Just maybe, her relatives might of had some photos and news clips. Doing this research about her in Europe, is none existent and very frustrating.

It‘s my luck to have the paternal family (von Meyer) who were well known on both sides, yet very elusive...except for the famed Vogue photographer Adolphe de Meyer, my first cousin twice removed. I should count my blessings for even finding this much.

Stories shared by my Aunt

The last time I visited my Tante (Aunt) Margot (my mom's sister) in Nürnberg, she shared something about my grandmother. My Aunt said that Georgianna was not friendly but very elegant, upright (almost snobbish looking) always wearing beautiful clothing and jewelry, large brimmed hats that she adorned with Lilac flowers (like I mentioned above) going for walks using her beautiful Russian walking stick, accompanied by her personal maid.

Here again I wish I had asked more questions, but then when you're young, the questions don't come easily because you really don't know what to ask.

I don't know too much about him, except for the facts that he was born in Dresden 5/27/1860 died in Paris 8/7/1930 buried in the family grave at Trinitatisfriedhof (Cemetery) in Dresden Germany....He was a handsome man, marrying Georgianna Ives 6/1/1886 a known European beauty. As mentioned before, they were married in the famed Frauenkirche (church) Dresden...

After his divorce, in 1916 he married Elsa Eysler in Hessen.

Having never asked anything about him or his parents, and failing to do that...I certainly have regrets. Now knowing that my sister and I are the only living von Meyer's left... I have a sadness.

Someone told me there was a data base for Hartford Connecticut newspapers on the Ives family at the Madison Historical Society in WI. The day I visited it was too crowded, so we left...on our way out, my eye caught a glimpse of a stand with little booklets in them, a word actually caught my eye "Hartford." Curiosity got the best of me so I picked up the booklet, and on the first page I saw the words "IVES"...hmmm Thank You God, I said! I made copies of this article written by a woman named Paula Ross "Lawson C. Ives and the Ives Widows' Homes: The Man, The Women, and The Missing Pieces," written for a course at the Trinity College .

The Book - The Letter

While looking in the Connecticut magazine I found information in an article, and now knew that my research failure was not me, it was the elusiveness of the Ives family in particular Georgianna's family. This article brought me to a man named Mr. Robert L. Edwards who also wrote a book "More then a Room Immanuel House and it's Predecessor" in regards to the Ives family and their involvement of a particular house that was once set up for Civil War Widows...now known as the Immanuel House.

I was happy to find information I was looking for, and it gave me more for new research

The Book - The Call

This little book is very interesting, regarding some of the Hartford Connecticut residence and their kind deeds that left an effect on the city. Mr.Edwards had called me and we talked briefly about the book and that I should be proud of my Ives family for their generosity.

I'm happy to know that my grandmother's Ives family were philanthropist, just like my paternal Meyer side in Germany, all this about the same time period...I find that interesting.

From the author Mr. Edwards 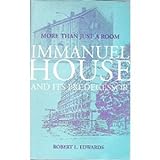 More than just a room: The story of Immanuel House and its predessor, the Ives Widows' Homes, Hartford, Connecticut
I had written a letter to Mr. Edwards asking him questions about my family Ives and the connection to this house. He replied in a letter and included this book autographed by him.
Buy Now

Manufactory of the Willimantic Linen Co.

I received an email with this image, a book related to my Great grandfather Lawson C. Ives and his involvement in being one of the original founders of the Willimantic Linen Co. also a page on his Clock Co. involvement.....

The image here is from the book "The Great Industries of the United States" 1872. Published by J.B. BURR & HYDE CO.

American Clocks and Clockmakers
A History of American Clocks and the Clock-makers. This book is great to start out with, especially for those who are interested in collecting them. I'm proud to come from clock maker families. I love seeing their clocks in this book.
Buy Now

Information about the Ives

I found this reading information about the Ives family interesting...elusive maybe, but still information I never knew.

During my research and using my dad's original handwritten Ahnentafel (Genealogy Chart) I noticed the Hartford Connecticut connection. I had then gone through my suitcase and found some articles to the Hartford Times were mom was looking for a sponsor of the Ives family to bring us to America...not surprising, no one wanted a widowed, penniless Baroness with two small children. By th Grace of God, an American soldier friend of mom's found someone to sponsor us, this would avoid the potential of having become a ward of the state.

Do you enjoy researching Genealogy?

You may not use, copy or save any part of personal writings by Delia Pacheco, protected by copyrights, all rights reserved, including personal photographs