Victoria and Nike – Goddesses of Victory

Victoria is the Roman version of Nike, Greek mythology’s goddess of victory. The two women were not exact copies of each other: Nike was very much considered the goddess of victory, but she was also considered a warrior. According to legend, Nike was a charioteer during Zeus’ war against the Titans, therefore she was also called upon as a patroness of athletes (hence the modern sportswear brand named after her). Victoria, on the other hand, was used more as a good luck charm and was often worshiped only once a victory had been obtained. To a certain extent, Victoria was very much a lesser deity of Roman mythology. She was often ignored, particularly when the Roman Empire started to decay. Victoria was, however, a common female name.

How the Goddess Became an Angel

Victoria and Nike were identical in appearance: each was portrayed as a beautiful, full grown woman, usually dressed in female garb and with an enormous set of wings sprouting from her shoulders. Victoria was a messenger, particularly one carrying the message of glory. But even more so, she could fly about the battlefield and provide a supernatural ability to conquer. Effigies of Victoria and Nike were beautiful and ethereal, and were known as Winged Victories. In fact, Nike, and by default Victoria, is the identity of the famed headless statue known as The Winged Victory of Samothrace.

After the Romans conquered the Greeks, statues and carvings of Nike were mostly likely rededicated to the goddess Victoria. After the fall of the Roman Empire, the Winged Victories were not destroyed, but rather Christianized. In all likelihood, the popular idea about the “physical” appearance of angels is due at least partly to the goddesses Nike and Victoria. When the pagan temples were consecrated as Christian places of worship, the images, which at this stage would have been images of Victoria, were considered heavenly angels. When new Christian churches were built, beautiful winged figures were once again included in the artwork.

St. Victoria and Our Lady of Victory

Victoria is now very much considered a Christian name. However, it is always a challenge for girls with this name to hunt down their patron saint. There are in fact five different Saint Victorias, but practically nothing is known about any of them and none are routinely included in the liturgical calendar.

Girls named Victoria – and for that matter, boys named Victor – who are looking for a patron saint are usually pointed towards Our Lady of Victory. This is basically an extension of Mary’s title as Our Lady of the Rosary. However, Our Lady of Victory has quite a story: In 1571, Giovanni Andrea Doria miraculously won the Battle of Lepanto against the Ottoman Empire. Doria felt the victory was due to the fact that he kept a picture of Our Lady of Guadalupe onboard the ship. 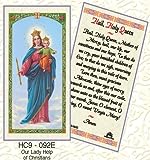