Roles and Responsibilities in the Family

Wife of a school administrator, mother of seven children, and grandmother of a growing posterity, Denise understands all aspects of family.

Many people today are concerned about the future of the family. High divorce rates, juvenile delinquency, teen pregnancy, full prisons, and problems in public education are all signals of decreasing family influence. Unrest and disputation exist as to the duties of the head of household, who is responsible for the children, and where boundaries lie.

Some feel the makeup of the traditional family is a cause of much disillusionment between married couples. Pepper Schwartz, in her book Peer Marriage (1994), defines traditional couples as “those who divide male and female roles into separate spheres of influence and responsibility, with final authority given to the husband” (p. 2). Her study on marriages of this type showed “that traditional couples sacrifice the elemental goals of intimacy, deep friendship, and (whether they know it or not) mutual respect” (p. 3).

How do you feel about roles and responsibilities in the family?

Population studies on the constitution of the family have triggered an increase in research. Focus on the Family, founded by psychologist, Dr. James Dobson, has provided a vast body of knowledge and understanding on the family. Researcher Dr. John Gottman published his findings in 1994 with Why Marriages Succeed or Fail. He speaks of the principles of communication that lead to marital success. 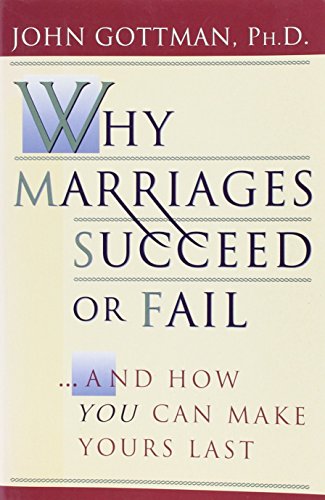 Why Marriages Succeed or Fail Publisher: Simon & Schuster; Original edition
An excellent treatise on communication in the family, Why Marriages Succeed or Fail speaks of how the style of conflict resolution makes such a difference. I have found this information helpful in my own marriage and have recommended it to others. They have reported back to me that they found it helpful as well.
Buy Now

These and the writings of others have led to an increase in the strength and stability of the recent decade of families; however, very few address the roles and responsibilities of men and women within the family. Having observed families for the past forty years, the author has developed a model, "The Family of the Future," that addresses this area. Successful families today are applying the principles of this model.

“Therefore shall a man leave his father and his mother, and shall cleave unto his wife: and they shall be one flesh.”

The basis for the model is the “nuclear family” – a “mother and father and their children” – as defined by Beatrice Gottlieb in her treatise The Family in the Western World (1993, p. 12). The family of the future is a nuclear family. It has three areas of focus: the marriage covenant, the secondary roles and responsibilities in the family, and the primary roles of men and women.

The marriage covenant in "The Family of the Future" is one built on the premise of equality between man and woman. Schwartz speaks of “egalitarian couples” (1994, p. 13). She defines them as couples that see each other as equals and “give priority to their relationship over their work and over all other relationships—with friends, extended family, even their children. Their mutual friendship is the most satisfying part of their lives.” She goes on to say “The point of equality and equity in these relationships is to create a marriage that makes each partner feel secure in the other person’s regard and support.” The man and woman, side-by-side, are equal in the marriage covenant. Together, they make decisions that determine the destiny of the family.

The Family of the Future, the Marriage

Adrian Wilson, author of The Family, calls the marriage relationship the “central core” of the family (1985, p. 9). In "The Family of the Future" model, the roof represents the marriage covenant. God, as the ultimate authority, is at the pinnacle. The two-way arrows leading from God to both the man and woman in the model illustrate the nature of their individual relationships with him before marriage. The arrows between the man, woman, and God represent the marriage itself. The action of marriage binds the man to the woman, and the woman to the man.Together, they are bound to God and constitute a family.

Secondary Roles in the Family

The marriage itself brings about secondary roles. They have to do with setting up and maintaining the “household”. Gottlieb states, “the family is the household” (1993, p. 1). Gottman’s research clearly shows that the reason for success or failure within marriage and the family lies in the issue of communication (1994).

When it comes to resolving conflict and determining household duties, “what really matters is that you agree on what’s acceptable.” Successful couples have a “style” that determines the way they communicate with one another and the way household responsibilities are fulfilled. It allows them to resolve conflict without harming their relationship. They are able to deal with crises effectively (Gottman, pp. 32-67).

The Family of the Future, Secondary Roles

Secondary roles and responsibilities are simply duties that must be done. As the husband and wife work together to accomplish these tasks, fulfilling them according to their own availability, talent, and personal preference, the household will run smoothly. Children can be given age appropriate chores that increase with ability and experience. Eventually they will reach the point where they can run things should the parents be absent from the home.

"The Family of the Future" illustrates this secondary role structure as the walls of the home, made with two-way arrows. There are many secondary roles - these are not an all-inclusive list - and they change as circumstances require. Flexibility and communication are vital in the distribution and fulfillment of these roles. The overall success of the family must be a common goal.

“...there is no such thing as men’s work or women’s work. There’s just work that needs to be done, and we do it together."

The Primary Roles of Men and Women in the Family

In "The Family of the Future" model, the roles of the man and woman are divided into primary and secondary roles. Primary roles are the result of biological differences that are inborn and cannot be changed or given away. Secondary roles can be fulfilled by either, both together, or children that are part of the family.

The primary role of the male is that of provider/protector, or husband and father. The husband provides the means whereby children come into the world, a place for them to live, support for their necessities, and leadership within the family. He provides support for his wife while she fulfills her primary role, that of procreator/preparer, or wife and mother. The mother brings children into the world and sees to their daily needs of nourishment and nurturing. Her support of her husband in his role brings strength to their relationship and to the family.

The Family of the Future, Primary Roles

In his book Straight Talk, Dr. James Dobson speaks directly to men and women, assisting them in understanding the role of fathers in the home. Straight Talk gives men information they can use immediately to build a home with the traits and qualities every home should have: stability and leadership without dictatorship; a solid system of family finances; children who know God and feel good about themselves; wives who feel supported, enabled and loved; and meaningful times of togetherness.

Many in our progressive society would have us believe that women do not have the primary role in the nurture of their children and men do not necessarily need to be the providers and protectors. Both of these myths leave men and women wondering just what their real roles and responsibilities are.

The Proclamation on the Family*

Society throughout the ages has experimented with various forms of deviance from the primary roles of men and women in the family structure only to find out too late in their history, that their society was in shambles. The current social experiments of cohabitation and gay marriage may work for some temporarily, but as a general rule, they leave women and children vulnerable to poverty, ill health, rejection, abandonment, gang influence, and crime.

The illustration shows the equality between men and women in their roles as fathers and mothers in the foundation of the family. When these biologically determined roles are respected and lived, children are brought into a stable family environment. They grow to be responsible citizens who eventually take their place in the foundation of their own future homes. Families who follow this established pattern strengthen society as a whole. Those who choose to leave this pattern behind take away from society the most basic of its vital building blocks, the family.

The Family of the Future Model

Roles and Responsibilities Within the Family Unit

Stephen R. Covey, in his book Seven Habits of Highly Successful Families (1997) tells parents: "Your role in the family will never end. You will never be replaced. Your influence and the need for your influence never ends. Even after you are gone, your children and grandchildren and great-grandchildren will still look to you as their parent or grandparent. Family is one of the few permanent roles in life, perhaps the only truly permanent role" (p. 116).

Covey says that successful families decide for themselves how they want their family to be. He lists as Habit #2 “Begin with the end in mind” (1997, p. 70). Every family needs a vision of its own future. Principles and priorities then govern the decisions the family makes along the way.

Do you agree that there are primary and secondary roles for men and women in the family?

The model of a house shown best illustrates "The Family of the Future." The roof represents the marriage covenant. Together, husbands and wives are responsible for the many duties (secondary roles) that keep the household running smoothly. The primary roles of mother and father provide a solid foundation on which the family rests, providing ample opportunity for the bringing of children into the world. The stairs in the front of the house symbolize the children that are born to the married couple and their upward movement into the family structure. The extended family provides a frame of reference and starting point for the nuclear family.

"The Family of the Future" is strong and stable, a stability that comes from the realization that the marriage covenant is the ultimate influence in the family. Equality within marriage leads spouses to treat each other with mutual respect. The couple makes decisions that affect the welfare of the family together. The male and female roles within the family are equally essential, yet very different in their constitution and fulfillment. Men and women who live their roles effectively and keep a vision of their vital purpose make strong families.

This article condensed and revised from a research paper completed by Denise W. Anderson in 2008 for an English class at Williston State College.

*Published by The Church of Jesus Christ of Latter-day Saints. The following resources are available at www.lds.org:

Gottlieb, B. (1993). The family in the Western World. New York: Oxford University Press.