Liz inherited the family history notes from an aunt, and was hooked on genealogy. The hobby connects history to family for her.

John Howland cursed our family with the klutz gene.

Once upon a time, I fell off my tricycle. It happens to many children. But it did not stop there. Oh, no. There were oh, so many more instances of accidents that, luckily for me, did not turn out too badly.

There was the time when I found myself out of control coming down the block on roller skates, and decided that a good 'stopping block' would be a telephone pole. Bad idea. I missed hitting the pole square-on with my hands, and instead, both arms slid around the pole in an impromptu bear hug. I received splinters all the way up both arms, and a nice bruise on my cheek.

I spent my earliest years before skateboards were invented. Back then, there was 'riding a single roller skate with a board placed perpendicular across the skate.' You sat on the board, held your feet up in the air, and used your hands on the outside edges of the board to steer. Naturally, I learned the hard way that you should not grasp the board with your knuckles underneath; especially not when rounding a corner.

In school, hurrying to get indoors for lunch on a rainy day, it struck again.

I was not the only one so cursed. My mother had her share of clumsy accidents. She told of one when she, too, was of high school age, out on a boat dock with friends. They were playing a silly game, and as mother danced backwards, she tripped over something on the dock and fell, rear-end-first, into an open hatch on the dock. Cartoon-style, with only her legs and arms protruding, she was nicely stuck, much to the amusement of her friends. Of course. Something like that is hilarious when it happens to someone else.

Later in her life, when I was a child of about 10, we were going to re-decorate my bedroom. I wanted to carry the gallon of pink paint downstairs to the basement for my father to mix. "No," said my mother, "it's heavy: you might drop it," and down the stairs she started. No one is quite sure what happened next, but the paint can somehow flipped out of her grasp and somersaulted all the way down the stairs, popping open on the way and distributing pink paint puddles all the way.

I howled in dismay. And no, she never lived that incident down to her dying day. It came up at least once a year in family gatherings where funny stories were being told. "WHO was liable to spill the paint?????"

(We all worked to clean up the mess as well as possible, but for the record, there remained pink paint stains and splotches here and there on the basement stairs, stairwell walls, and studs for the rest of my days in that house, still there after my mother passed on, and the house was sold back in 2003.)

It all began back in 1620 with the voyage of The Mayflower bearing the English Pilgrims to the New World. One John Howland was among the passengers, signed on as a manservant to Governor John Carver.

As luck would have it, I am descended from that same John Howland.

I discovered this back in the mid-to-late 1980's when a great-aunt presented me with the carefully compiled family history records that had been in the family for generations. As I was the only one who had expressed any interest in genealogy, the data came to me. I loved the discovery of strange and interesting facts, and the way it made otherwise boring history lessons relevant to me on a more personal level. "Gosh! This ancestor was in the Civil War!" or "I never knew there were so many people who married thier cousins!"

Now why do I say, "as luck would have it?" Well, it seems that the illustrious Mr. Howland found himself overboard from The Mayflower one day during a storm. Luckily for his descendants, he was rescued. 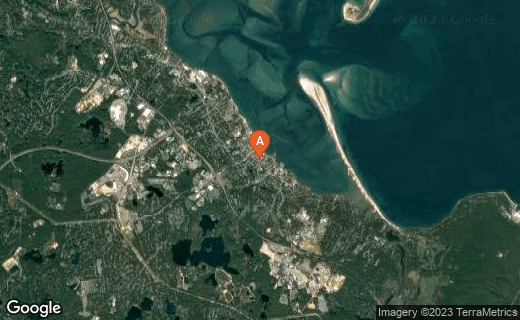 Landing place of the Pilgrims in 1620.

The unfortunate tumble overboard has been memorialized in a painting. The link is to a site that sells copies; therefore, according to copyright restrictions, I cannot post the photo here.

There is a society for the descendants of John Howland, specifically, in addition to the more general Mayflower Society, in which a much larger number of people are eligible for membership.

And that, dear readers, is why, every time I stumble or trip on something, bark my shins, or whack knuckles on a door jamb, I cry out, "Damn you, John Howland!"

Sad to report, that klutz gene is alive and well, and afflicts both my daughters and at least one of my grandchildren. And so I offer the one-finger salute to the memory of the infamous Mr. Howland.