Aesops fables such as the short story of the lion with bad breath are quite well known. There are a large number of ancient short stories and fables that exist today and many of us would have read some or the other stories and tales including from the famous collection of Aesops fables. Though many of these stories appear to be quite simple and small and offer good entertainment, often they also offer interesting insights into common behavior. These stories are quite thought provoking and can be enjoyed and pondered upon both by children and grown-ups.

The lion with bad breath is one such interesting short story from the Aesop's collection of fables. This story is retold below.

Livo Lion was not feeling good. The lioness had been unusually frank and candid that morning. She had actually told him that he had bad breath! Livo was enraged. He had roared loudly, didn't she know he was the king! But he couldn't really do anything more there, after all she was the lioness! "Go, ask your ministers, if you don't believe me," she had taunted. Livo decided to do just that.

The ministers were summoned - all three of them. Silly Sheep, Woolly Wolf and Foxy Fox trooped in, a little cautiously - they had all heard the roar!

"Come close to me," roared Livo to Silly Sheep. "Tell me the truth! Do I have bad breath?"

"Yes, your majesty," she whispered. "It is pretty bad. In fact it is not easy to even stand close."

"You silly animal," roared Livo and pounced on her. That was the end of Silly. 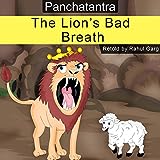 Next it was Woolly Wolf's turn. Woolly had already seen what had happened to Silly. He did not want to be the next victim.Obviously the king was not happy with the truth!

So Woolly on being asked the question flattered the king, "Your magnificent majesty. Your breath is sweet and fragrant, the best of the jungles's roses are not a match to it."

Now, this was too much, even for Livo Lion's simple intellect. "You liar," he roared. "You think I am a king that needs flatterers like you. You think I just want 'yes sirs' around me."Off with his head," he didn't quite say, but he pounced and the wolf was history.

"Where is that fox," roared Livo and Foxy Fox came running up. He had already seen what had happened to Silly and Woolly. So Foxy had his survival plan ready. Livo asked him the same question.

Foxy Fox cleared his throat noisily, coughed once or twice, came close and said, "Your majesty, I am so sorry. I have this awful cold and cough. I really can't smell a thing."

"Here have this cough syrup," offered Livo not able to find anything wrong with the answer. Besides his anger with the lioness had already abated.

And thus Foxy Fox lived to see another day.

The lion and the mouse - A short story for kids - video