The Only Thing That Worked with My Three Children

When my children were between about fifteen months and two years old, each of them seemed extremely delighted to try to use the little potty chair. With big smiles they'd proudly settle onto the seat, only to do nothing (zero, nothing, not a drip, zip). There's I'd sit, on the edge of the bathtub, with the circulation to my tailbone and legs gone, really, really, bored.

Not wanting to say or do the wrong thing, I'd cheerfully ask if a child was "finished yet". Of course, nobody was ever finished, because nobody ever did anything. When I would suggest leaving the bathroom and trying again later, each one would scream and say they wanted to stay there. I don't really recall how it is I ever got any of them to leave, but - twenty some years later - and not still sitting on the edge of that cream-colored bathtub.

With each child, after enough of these horrendously boring (and ultimately unpleasant) attempts at getting them to use the potty, I eventually got to the point where I left the potty there but was just as pleased that they just go-the-heck in their diaper and spare my hip and tail bones the unending discomfort of the bathtub's edge. (Maybe those clever little creatures had used reverse psychology on me?)

The way it went was that at some point late in their second year, we'd have one particularly awful bathroom-sitting episode, and I'd end by saying, "Well, if you ever want to use the potty, it's there for you." (I'd secretly think, "Dear God, don't let them ever ask me to use that. It's a nightmare.")

As the months wore on, however, and their birthday was either looming (or worse, gone by), I was feeling pressured (by myself) to get the toilet training accomplished. By the time they were close to, or just past two, though, they were "civilized" and "smart" enough to know about worrying about accidents. (Although I certainly put no pressure on them not to have accidents, they - like their mother - put pressure on themselves to do things correctly.)

One child development principle is that the potty chair that seems so nifty and novel to a fifteen-month old isn't all that appealing to a child of around two. At two, children pretty much realize their potty habits are theirs and their alone, so potty training around that age may be the worst age to try. (On the other hand, who wants to pressure a one-year-old or wait until a child is past three?) (Oh, the dilemmas of potty training.....)

There are only so many months (12 to be exact) between the second birthday and the third, so once a few of those precious third-year months pass, it's easy to understand why a mother would start to panic.

While my method for my ever-so-conscientious-but-pretty-relectant children was not reverse psychology, but there was something about it that kind of seemed related to reverse psychology in some way. I call it my "kind-of-reverse approach (sort of)".

I let my toddlers "know" "we" had no real intention of changing the way we were doing things "although it might be fun to try going without a diaper just while we run to the store". I would assure them that we would not be out for very long, and if they had to go I would get a diaper on them. I'd also assure them that "we" could put the diaper back on when we got home.We gradually increased the length of time we were out, and after a few outings in the beginning nobody would be in a hurry to get the diaper back on when we got home. When we'd get home I'd wait a while and then say, "Hey - should we put the diaper on now?" They would tell me "not yet". Not having the diaper on, and having gone for a few hours without one, seemed to give them a little confidence; so they would often ask to use the potty. In the evening I'd put the diaper back on.My kids' big fear was not wanting to have an accident, and they kind of liked that sureness having a diaper on offered. They wanted to get out of diapers but just were too "serious" about accidents.I think the approach worked with them because it gave them the chance to gain confidence going out without the diaper, but knowing I "had no intention" of making them get rid of diapers all at once.I kind of approached it this way, "Well, one of these days when you're bigger you'll have to be wearing Big Boy pants" (but I made those comments separate from any attempts to get them potty trained). That thought let them know that that's what bigger kids and adults do. When I offered them the chance to "just try" going out I think they weren't threatened with feeling like it was a giant change in their lifestyle. I was careful to let them know they could make the decisions, and I'd go without what they wanted. I think it took away any power struggles, as well as any worries.

This approach worked with my particularly reluctant first child, but I suppose I thought it was a "freak thing", because when my next little guy came along, I returned to my old ways and tried to potty train the "conventional" way. With him, too, I learned (after failing with the conventional method) to use that "reverse approach". It worked equally well with him, and I don't know why I didn't just do things that way with him from the beginning.

By the time my daughter was born, I had finally figured out that it wasn't just my first son who wasn't interested in being trained, and that my approach had worked twice. So, with my daughter, I didn't even both setting out the potty chair when she reached a year or so.

I just waited until she was good and old (not three yet, but not all that far from it) and went with the approach that had worked for her brothers.

When they're too close to a year old they're still too young to really control their toilet urges, and even when they're trained it's often just a matter of their mother knowing when to head off what might be coming. When they around two, though, they're intelligent enough, and yet emotionally young enough, for the matter to be far more than a simple matter of "doing wetties in the toilet".

What I think I figured out, though, is if a parent realizes all the "mental issues" involved in training a two-year-old, it is still possible to outsmart that two-year-old. 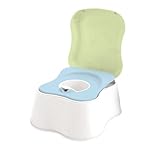