What's in a Name? A Rose by any other name is still a Rose. 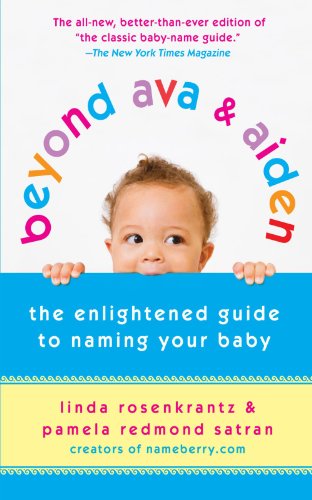 Beyond Ava & Aiden: The Enlightened Guide to Naming Your Baby
Buy Now

Top Girls Names in the U.S.

Top Boys Names in the U.S.

The above title was written and immortalized by The Bard, William Shakespeare in his tragic play, Romeo and Juliette, of the star-crossed lovers fame. In the play, Romeo is saying that names are not what are important in life. The Montegues and the Capulets were two Verona families that had feuded for years and ironically, Romeo Montegue and Juliette Capulet had fallen in love. The names and the feud were not as important as their love for one another was the point Shakespeare was trying to make.

But, is Shakespeare really correct? Are names so unimportant? I think not, especially when talking about first names, as I will explain about my own name. Some people believe names define a person. I won't go so far as to say that; however, I believe time and care should be taken when naming a child.

Pixie Geldof, Suri Cruise, Apple Martin - these are just examples of children of celebrities who have given their children quite unusual names. Will these names stand the test of time? When these children turn 21 years of age, how will they feel about their unusual names then? I don't know if I would want the name Pixie at 57 years of age. It comes across as a little silly too me at that age.

Believe it or not, my own name, Suzette, a nickname given to me by my parents at birth, has been unusual enough for me throughout life. I love the name and I closely identify with my nickname. I would not want to be called anything else. But, it has been a point of consternation during my adult life and not my childhood. But, that's another story for another hub.

Because of this, I think it is very important for prospective parents to give quite a bit of thought and consideration when choosing a name for their child. I don't think naming a child should be taken lightly nor should it become a platform for a bit of comedy. The child has to live with the name for a lifetime (or until they can legally change it in court), and "setting a child up for a childhood or lifetime of laughter and ridicule" is something to take seriously. Following are some guidelines to consider when choosing names for children.

One of the most important things to consider when choosing a name for a child is how the child's name will sound when it is said aloud. Is it melodious? Harsh? Solid? Does it go well with the surname. Longer first names work well with shorter last names and vice a versa. Always resist pun names, for example, "Hollywood". My given name at birth follows the recommendations given here: Suzannah Marie Wolf. It is melodious and a longer first name with a shorter last name. Now, that changed when I married, but, I started out life with a beautiful, melodious given name. Only the spelling of Suzannah is unusual which brings me to my next point.

Here my parents shone when they chose a name for me. Unusual names makes one stand out from the others. Popular names like John or Joe means several by that name will be found in classrooms and offices. On the other hand, a name no one has heard and can't pronounce can draw unwanted attention. But, if Smith is the last name, then an unusual first name like Archimedes can be a good name to pair with Smith. If Aytrivbsoan is the last name, then a more common first name like Joe would be a good one. Suzannah, with its unusual spelling and Suzette as a nickname were unusual enough that I have never run into either name ever in school or work places. Even when traveling in France, I never ran across a "Suzette." Of course, the downside of all this is that I will never be able to find or buy a keychain with my name on it.

Many parents consider naming their child after a grandparent, another relative or close friend. These names can provide the parents with a good pool of names to consider. Remember, the child will have to live with the name so it might not be good to name the child after great-aunt Hepzebiah or Hildegaarde. I was named after my aunt - that is where the name Suzannah came from - and it was my grandmother's choice of spelling. Because we already had Sues and Susies in the family, my parents didn't want me to get those nicknames, so Suzette was given to me as a nickname at birth. With my Aunt Sue and my first cousin Susie, I was definitely a Suzette. I could never be or go by those two former nicknames.

The heritage of the child is important to take into consideration and is the essential part of who the child is. Religious preferences can steer parents toward certain names. Or, if you want to remember a family name, it can always be used as a middle name. I did that when I married. I legally changed my name in probate court when I married to Suzannah Wolf Walker to honor my father's name as there are no more male Wolf's in our family. My sister did the same when she named her eldest son Michael Wolf Gannon. My name now is less melodious and more solid sounding, but honoring my father was more important to me than a melodious sounding name.

The name Ingrid means "hero's daughter" but no one is likely to treat her differently or ridicule her. But, the derivation of a name is something parents may want to consider. Stockard, for example, means "from the yard of tree strumps" and a female child may not be so enamored with that particular name. Suzannah means "lily." I have always considered myself a "lily of the valley" - I know, get over it, for heavens sake - but I carried some lilies of the valley in my wedding bouquet when I was married. Names with a particular meaning can have a meaning to the child. My niece and godchild has the name Megan which is a Welsh name meaning "lily." And, she is as sweet as the flower! (and her aunt and godmother - LOL)