Why We Don't "Elf on the Shelf"

The Elf on the Shelf - Sold Out?

What is The Elf on the Shelf

Before coming up with the excuse, ahem, decision that my family would not be participating in The Elf on the Shelf this Christmas, I wanted to know exactly what it was. Maybe I did not understand The Elf on the Shelf. Maybe there was an easier way to own an elf without having to come up with daily adventures. However, the more I researched the idea, the more I realized it was work.

On the actual The Elf on the Shelf: A Christmas Tradition website, it describes this new tradition as a special scout elf, sent from the North Pole, to help Santa Claus with his naughty and nice lists. Through this elf, children are encouraged to be good during the month of December. If they're not, their elf will report it to Santa, resulting in fewer or no presents. I don't know about you, but I would like to think I have been a good enough parent thus far, that my kids will also be good throughout the other 11 months of the year. I want my kids to respect me. Not Santa Claus and his magical, mess making, tattle-telling scout elves.

What Do You Do With The Elf on the Shelf

The first, and obvious step is to go out and buy an Elf on the Shelf. There are a ton of variations, from plush toys, to the ever popular elves with the super creepy, 70's googly eyes. You can even choose your elf's sex and skin color. Once home, you name your elf, and can register it on the Scout Elf Registry. Can't find one of these miniature creepers? There is even an Elf Adoption Center search tool on the official website.

Now, by this point you have searched the Elf Adoption Center, paid the approximate $30, named your elf, and have registered it on the Scout Elf Registry. Although, the work is far from done. The magic has now been activated, and your elf can travel back and forth to the North Pole to report your child's behavior to Santa. So, this is where I get to the point why I don't Elf on the Shelf. From the day you introduce your elf into the family, until Christmas eve, you must come up with, and execute adventures nightly to entertain your kids, and prove this elf is legitimately magical. This also translates to: I am not getting to shower, grabbing that last piece of cake I had hid, and devouring it on the couch while I watch TV. No. Now, for the entire month of December, I am going to have to cross one of these daily pleasures off my list to ensure this elf "does its thing," and I still get to bed at a decent time.

All of this just to make children mind their manners, do chores, finish their homework, and not fight constantly?

The Cons of The Elf on the Shelf

As if everything I mentioned above isn't enough, there are several other reasons I have decided, as a parent, not to Elf on the Shelf.

First of all, I am not too keen on spending over $30 for a toy my children cannot touch. Secondly, the scenario immediately ran through my head of my precious, yet very curious 6 year old daughter. She will touch the elf, just to see what happens. If she were an only child, I would simply make the elf "disappear" to teach her to follow the rules. But, that wouldn't be fair to my 9 year old son. So, now I am left to come up with a lie as to why the little Houdini is still getting around, and left with the guilt of lying to my kids after I have taught them not to.

Again, I just don't think I could continuously lie to kids, or commit to cutting into my 'me' time nightly. I am a parent. I am busy and tired. Therefore, I do not feel guilty for needing that little bit of time I have at night to unwind.

Editor and blogger, Matt Pelc said it best with his article, "How the Elf on the Shelf Ruined Our Christmas." He speaks of his daughter, and how the joy and true meaning of Christmas eluded her the closer the time came for her elf, Missy, to leave. It came to the point that she carried around a picture of her and her beloved elf, and cried often until almost February! I do not want my kids to ever feel that type of pain or loss. The world has enough hurt and let downs without purposely adding another one.

In unconfirmed reports, it has been said that certain Elf on the Shelf plush dolls are highly flammable, and have caused house fires. Just from being overly exposed to heat, not an open flame or spark.

The Elf on the Shelf: A Flammable Tradition?

Elf on the Shelf: Love It or Hate It

The Elf on the Shelf to their family. Maybe a piece of me wrote this to find other parents who are busy and tired as well, and can sympathize with me, and why I don't Elf on the Shelf. However, even with my son and daughter's relentless pleas to buy an elf, I have not caved yet. When I think I am about to, I remember my "me" time, the commitment, the lies I will have to tell, and the fact they will feel like if they don't behave, they can always make up for it during the month of December when their scout elf is watching.

That doesn't mean I don't enjoy seeing everyone else's Elf on the Shelf adventures! My hat is truly off to some of you parents, and the lengths you have gone through to make sure your family's elf is the most clever of all. Do you and your children have an Elf on the Shelf? If so, what crazy and wild things has her or she done?

The Elf on the Shelf: Yes or No

Does your family have an Elf on the Shelf or plan on buying one? 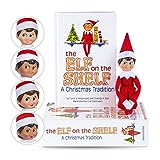