Norman was a hurdle jockey who raced at Randwick racecourse in Sydney, NSW. His horse was called Coster.

Norman and Coster were tragically both killed during the running of a hurdle race. He was only 27 years old.

The newspaper articles written at the time give the details about the accident.

Coster, generally reported to be a slow beginner, hit the first hurdle hard. Norman was thrown from Coster. Coster landed heavily on his back fracturing his spine. Neither moved again. An ambulance took Norman to the casualty room, where the club doctor found that Norman had broken his neck.

The Coroner returned a verdict of accidental death.

This is a photo of him as a child. We had a photocopy of this for a long time without knowing who it was. Thanks to Ancestry.com a distant cousin had uploaded it and named it! We were thrilled to find out it was Norman!

A poem, written in memory of Norman, goes like this.

He is gone from us for evermore

A jockey of some fame

he was well known by racing men

McKinnon was his name.

His loss we all deplore

we sympathise with his kind friends

who'll see his face no more

At 6min 24sec within this documentary

Excerpt from a 1928 documentary on Sydney's busy tramway system. Filmed as huge crowds depart Randwick Racecourse.
Intertitles: A glimpse of the Sydney Cup at Randwick Racecourse. Marshalling hundreds of cars for the return Racecourse Traffic. After the last race the rush commences. An exceptional feat in Tramway Transportation. Trams move the huge crowd at the rate of 1000 per minute.

Ewen was born in Kilmonivaig and christened on 12 Feb 1829 in the town or parish of Strath in Scotland.

His parents were Archibald MacKinnon and Mary Stewart.

Archibald and Mary were married on 26th March 1818 in the parish of Kilmonivaig, county of Inverness, Scotland.

Ewen, Mary and his daughter Eliza came out to Australia on the maiden voyage of the Marco Polo. In September 1852 they arrived in Melbourne, Victoria.

800,000 Australians can trace their roots to the Marco Polo. The three masted wooden clipper ship, named after Venetian explorer Marco Polo was launched in 1851 at Saint John, New Brunswick.

Declared the "fastest ship in the world" She completed a 76-days voyage from Liverpool to Port Phillips Heads, Victoria, Australia, Captained by James Nicol Forbes. 52 passengers died during the voyage from a measles epidemic.

After two years in Victoria, the McKinnon's made their way to New South Wales, residing as graziers at Brungle, near Tumut. 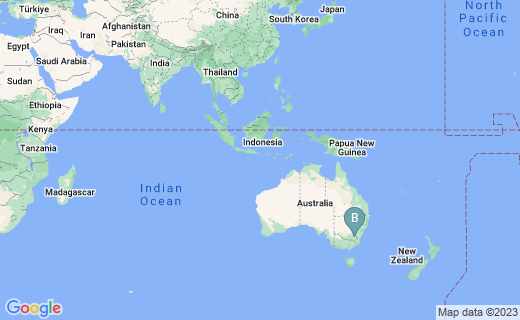 Map showing the distance from Kilmonivaig Parish in Scotland to Brungle in Australia.

Hugh and Mary had a family of eight children, Eliza, was born in Scotland, Archibald was the first of the children to be born in Australia in 1855.

At the time of Hugh's death, he and Mary had five living children. Archibald, Catherine, John, Hugh and Jessie. Three daughters had predeceased him.

The origin of the McKinnon surname

The McKinnon surename is Scottish and comes from an ancient form of the name MacFhionghuin. In gaelic it means "Fair born"