How Toxic Toys Are Affecting Our Children

We came to think that when we bought a toy for our child, especially if the toy was from a major maufacturer, we could count on that toy being safe. At least that is what we thought.

The facts are that in 2005 nearaly 73,000 children under age 5 were sent to the hospital emergency rooms. 20 children died from toy related injury according to government statistics.

The problem started when companies were outsourcing work to other countries. These toys that were imported did not have the controls and safety testing that those in our won country might have.

Now it is coming to light that many of these toys have been manufactured poorly. That non spec paints and parts have been built into them. Who would have known till now the end result.

The holidays are coming and we think that you should be an informed shopper ! Because of the numerous recalls, you should be checking your list more than once or twice.

We will be adding resources daily. so please bookmark us.

On August 14th, 2008, the product safety law was finally passed. This bill, signed by President Bush, bans lead paint and phthalates in products intended for children under the age of 12 - the strictest such law in the world. There were a record setting 448 recalls in 2008, about 50 percent of those recalls, involved our children.

The new law bans six different kinds of phthalates - chemicals that make plastics more flexible. These chemicals have been linked with reproductive damage. Phthalates can be found in dozens of baby and child products, including bath toys and baby lotions.

Toys Must now be tested before they are sold

How To Protect Your Kids

There is at present no national lead regulation law. So for the present, it is each of our responsibilities to take family matters into our own hands. 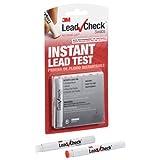 3M 717834209102DUPE LeadCheck Swabs, 8-Pack
These swabs are a must have for every parent and grandparent that is concerned that the toys their loved ones play with have any lead. The problem is that toys manufactured outside of the country do not have the same requirements for lead paint content as we do in the states.
Buy Now

Lead Testing Kit - Every home should have one !

It's not just the new toys, but there may be several old toys that may be hazardous to your children's health. We suggest that you purchase a kit and be sure that what you have around the house is safe' We have searched the net and we recoomend these products

Tests on more than 1200 children's products were conducted by a coalition of enviormental health groups across the country.

According to the report by the Associated Press on December 6th, only 20 % of the tested toys had no trace of lead or harmful chemicals.

35 % of the tested toys conatin lead, many levels far above the federal standards used for lead paint. According to this report, 17% of these products had levels of lead that would trigger a recall of lead paint.

Testers purchased most of the toys at local retailers such as Wal;mart, Toys R Us and Babies R Us.

This is such a huge topic that we wanted to collect some great groups and websites that you can use to learn more about toy safety.

Government and Other Groups - Recalls and Action

These are resources where you can get up to date information as well as who is on the front lines on toxic issues.

Toy Safety Tips - These are from the Consumer Product Safety Commission

There's been a lot of concern and government investigation into toys and baby bottles that contain bisphenol A (BPA), a chemical compound used in the manufacturing of many plastics.

While some phthalates have been banned, a few common ones you might see on product labels include: BPA (Bisphenol A), DBP (dibutyl phthalate), DMP (dimethyl phthalate) and BBzP (benzyl butyl phthalate). Widely known as “endocrine disruptors,” the health effects of phthalates include damage to the liver and kidneys, birth defects, asthma and early puberty.

The U.S. Food and Drug Administration claims its regulated products containing BPA are safe. However, it has also formed a new BPA task force to do more research.

If you are unsure about any toy, go the the government web site on toy safety

Other Toxins Found In Toys

The Mattel Story - Where it all started or did it?

On September 7, 2007 another recall was added to the growing list-Barbie Accessories. With most of our toys being manufactured elsewhere,can we truly feel safe again. The fact is that most of these toys were in fact manufactured in China. And what was the major issue-lead paint. Where the list will end is anyone's guess !

The September 2007 recalls include paint hazards from Fischer Price Toys also. Again, levels of lead in paint seems to be the biggest problem. Here are some of their recalls.

More News On The Retail Front

Toys R Us, the nation's second largest toy retailer, behind Walmart stated that it would use an indepemdemt lab to test every branded product, accordimg to Kathleen Waugh-company spokeswoman.

The retailer says that it will absorb the costs this year, but it also thinks that next year pricing could increase.

The Walt Disney Company was hit hard by Mattel's recall of 435,000 toy cars believed to contain lead paint. The major product was called "Sarge" , a character from the Disney movie, " Cars". Disney will now independently test all toys featuring their characters.

These tests will include all catagories od toys from about 2,000 licensees

Vinyl Bibs Under Scrutiny - They are not toys, but we thought it was important

On August 17th, Toys R Us pulled off it's shelves a massive amount of bibs that were made with high levels of lead. These were retailed also at Babies R Us. These companies were offering a refund on any bibs purchased at their locations. Here is more information on bib recalls.

We have gathered lots of resources that will help you keep up with all the latest toxic toys. Bookmark them caise we know this will be daily news for a while

So What Toys Are Safe

The best toys are made from the most natural materials. Natural materials like solid wood especially those with an unfinished or non toxic finish. Also those made with cotton, hemp, wool or natural rubber would be considered safe for kids.

When shopping, look for PVC- and BPA-free products. Avoid plastics labeled No. 3 or with a “V” inside the chasing arrows symbol (PVC) or No. 7 (polycarbonate). Typically, squishy or flexible plastics — think rubber duckies and baby dolls — are likely to contain PVC. Give the toy a sniff — PVC usually has an odor like vinyl shower curtains.

You can actually do a search for non toxic toys in most major on line shopping websites like Amazon, Target and Walmart.

Who Will Bear The Cost For Safety ?

Yes, more than likely, the cost of better quality control will be passed to consumers. However, it also should be said that these costs will not be passed on until after the 2007 Christmas Season.

Prices are expected to go up at least 10 % after the more than 3 million toys that were already shipped from China are recalled.

Some critics have said that prices were kept low in an effort that the discounters have waged. These same critics will say that real safeguards were sacriced during these same price wars.

Some analysts have states that prices will remain the same till January because manufacturers and sellers have already ordered their Christmas inventory.

Product testing is now at a frenzied pace and the cost of it all will eventually be passed onto consumers.

Eric Johnson, a professor at Dartmouth's Tuck School of Business has stated, " This year, both retailers and manufacturers will share the costs. But in the longer term, costs will have to go somewhere. And consumers will see it."