William Wood was the Mayor of Dalby in the late 1880's. In this photograph of the Dalby Council, he is the one standing at the back, underneath the arrow.

William was born in Ashton-under-Lyne in Lancashire, England in 1829. Son of Joseph and Hannah Fitzsimmons, (also known as Mary Ann Simmons).

The eldest of 7 children, William's brothers and sisters were:

Ashton is a manufacturing town, earlier a market town. The spinning and weaving of cotton is its main venture along with the making of hats. Coal is abundant in supply and is distributed further. Situated 7 miles east of Manchester, and 186 miles from London. Located on the north side of the river Tame, its waters are filled with trout. Two churches stand, one built in the 15th Century. Not far from this church is a manor house once owned by the Assheton family.

Where is Ashton Under Lyne? 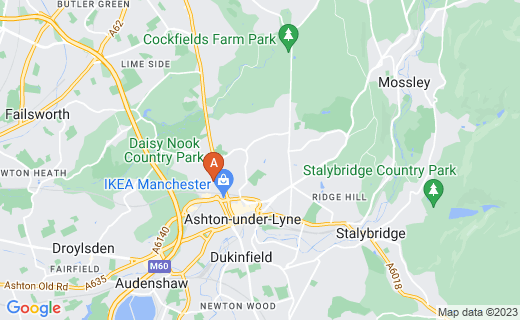 The name "Ashton" probably came from a farm, homestead or settlement close to ash trees.

The cotton industry in Lancashire

The county of Lancashire was perfectly situated for the cotton industry because the damp climate stopped the cotton thread from drying out and snapping when it was tensed. As the cotton thread was not particularly strong, wool was used to make the warp for weaving. Lancashire was well known for the number of people who worked in its wool industry, so there was a ready market for labor.

Joseph Wood was a cotton spinner in Ashton Under Lyne. A cotton spinner would operate the spinning machines which had a number of spindles to make the thread.

Williams' family left Lancashire during a bumper year for the cotton industry. The following year was pretty good too. This overproduction led to wide unemployment and riots in some towns. Known as the "cotton famine" this accounted for much hardship in Lancashire in the 1860s. Joseph and Maryanne left the country around about 1861. It appears they departed Ashton Under Lyne just in time.

arriving in Moreton Bay on the Glentanner 1859. Conditions on the boat would have been crowded and unhygienic.

Measles and scarlet fever broke out on board ship and 23 passengers lost their lives. Children and older people are more susceptible to catching these highly contagious illnesses.William's daughter Mary Hannah died on board the ship. Hannah Hall nee Wood and her husband came to Australia also on the Glentanner. Hannah's infant daughter Martha was one of those who succumbed to the disease. With Hannah passing away a mere 3 days after arriving in Australia.

Joseph and Mary Ann Wood (William's parents) came out to Australia, in 1861 aboard the Marco Polo, landing in Melbourne. Mary Ann predeceased her husband and is buried on her son Michael's property.

In 1868 Joseph Wood snr applied for a publicans license for his house at Gowrie Road to be a family residence plus an inn or public house, to be called the Criterion Hotel. In his application he states that he is a widower with three children and has held a publicans license before.

Joseph died in 1894 and is buried in Towoomba cemetery.

Sarah was born approximately 1843 in Woolwich, Kent, England. Her parents were William Allan and Caroline Clark. Her first husband was George Clark, they had 2 children together, Caroline and Edward James. Sarah was widowed for an unknown amount of time. She married William in Brisbane, Queensland. in 1877 when she was 33 years of age and he was 47.

William and Sarah had four children, one was my great grandfather Thomas Ashton Wood Senior, 1882-1969. He was 7 years old when his father died in 1889. His siblings were:

Sarah had two children from her previous marriage Ted and Carrie Clark. When William died, he left Sarah 1,000 pounds. Sarah went to Toowoomba and bought a house for 160 pounds.

In 1871 Ashton Grove, a small property on the outskirts of Surat is selected by Joseph Wood and takes the name of his birth place "Ashton-under-Lyne" in England.

A very small village, Surat is on the Carnarvon Highway in Queensland about 390km west of Brisbane.

A newspaper article in the Maitland Mercury & Hunter River General Advertiser reports stock (850 sheep) purchased by William went out to his station on the 5th February 1879.

As far as we know Ashton Grove passed to his William's son from his first marriage, Joseph.

William, nicknamed "Hungry" was the licensee of the Criterion Hotel Gowrie Road/ Bridge Street from 1865-1868. And the Golden Fleece from 1868 to 1889.at Dalby

In 1857 Dalby had a Town Council of six, led by Mayor Frederick Roche. Dalby's first town hall and council offices were in Scarlett Street.

The Council moved only to have the building burnt down again in 1909. After the fire, the Council set up new premises in Marble Street. This building combined the Council Chambers and the town clerk's residence. Unfortunately most of the early council records were destroyed by the fires.

Dalby is situated north west of Brisbane, Queensland, Australia and is at the crossroads to Toowoomba, Kingaroy, Roma, Mundubbera and Goondiwindi. Dalby and the surrounding Shire is is at the centre of rich coal and natural gas reserves and are important players in the power industry for SE Qld.

The Darling Downs area is rich in agriculture and grows crops like as cotton, wheat, barley, chickpeas, mung beans and corn. Along with lamb, beef and pork. Fish, hemp and native flower production has recently been added to the diverse range of produce. 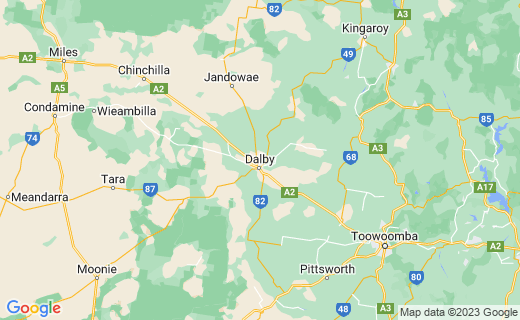 Called the "City of the Plains", Dalby is a rural town on the northern Darling Downs. Founded in the early 1840s at a place known locally as "The Crossing" on Myall Creek flood plain.

Proclaimed a municipality in 1863, it was like much of the Darling Downs taken with dairying. After the demise of the industry it was followed by beef and sorghum .