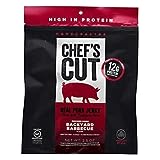 You have a recipe that calls for pork. That sounds easy enough? However, when you get to the grocery store, you'll see that you have many different cuts of pork to choose from. Luckily most recipes call for one of the five main cuts of pork. If you know when it's right to be these five options then you'll probably be able to make a good pork selection whenever a recipe calls for it.

The top five cuts of pork are:

If you have any experience with eating these different cuts of pork then you know that they all vary a lot from one another in terms of taste and texture. As you get more familiar with selecting these cuts, you'll get a better sense of which one is the right one for a particular meal.