Poppy is the author of "A Bard's Lament." She lives in Enoshima and likes to read novels and play video games, especially open-world RPGs.

HP (Houses of Parliament) brown sauce is a British confectionery sauce that you'll find in almost every supermarket, restaurant, and cafe in the United Kingdom. It is also available in some US supermarkets in the international sections, and can even be bought on websites such as the English Tea Store and the British Corner Shop. HP sauce can generally be found in the condiments section in any British store.

Houses of Parliament sauce has belonged to several companies including Midlands Vinegar Company and Smedley HP Foods Limited and now belongs to Heinz. There are a few varieties of the sauce such as HP Fruity, HP Beef, HP BBQ, and HP Guinness steak sauce. This article is about the original classic flavour.

HP sauce is sometimes regarded as an "English staple," as so many people in the UK say that they can't live without it on their sandwiches or fried breakfasts. Here are five foods that go great with a little (or even a lot) HP brown sauce added to them.

How Often Do You Eat HP Brown Sauce?

No bacon sandwich is quite complete without a dash of brown sauce! Whether your sandwich is on soft bread or toast, scraping butter on one piece and brown sauce on the other gives you the perfect blend of flavours and some moisture to the sandwich. The tangy taste of the sauce compliments the meatiness of the bacon. Spread brown sauce on both pieces of the bread if you prefer.

HP sauce goes very well with fried meats like bacon, and some argue that a sandwich just isn't as enjoyable without it. Try topping your bacon sandwich with a fried egg or some cheese for an even bolder meal.

Another fried meat that is usually part of a "full English" breakfast is some fat, juicy sausages. Any type of sausages that you choose will do, but a particularly good choice is Cumberland sausages with black pepper, chopped, fried, and put on toast with HP brown sauce. It is the perfect breakfast, lunch, or brunch on a Sunday mid-morning.

Sausages by themselves can also be enjoyed with HP sauce, by using it as a dip, and pigs in blankets are also an excellent choice. The tangy vinegar flavour greatly compliments the fatty, meaty texture of the sausage and will have you coming back for more.

Fish and chips is a classic English dish available in virtually every corner and coastal town of England, so it only makes sense that classic HP brown sauce can be added to it as well! The fish, usually haddock, cod, or plaice, is fried and battered, and adding brown sauce gives the savoury, oily taste of the fish a tangy kick. Thick chips go very well with it too as a dip or poured onto them like ketchup.

Some fish and chip shops even offer packets of HP sauce that you can ask for with your order!

Cheese on toast is always a tasty treat. There is nothing better than sizzling cheddar or Glastonbury on crunchy toast served with a cup of tea. An excellent addition to this fantastic snack or meal is to spread a thin layer of brown sauce onto the toast before you add the cheese, giving it the boost it needs to go from yummy to delicious.

You can also add a small sprinkle of black pepper, cayenne pepper, chili powder or Tabasco sauce to cheese on toast for variety.

Minced beef, pork, and lamb are wonderfully versatile ingredients that you can really make your own with herbs, spices and sauces.

Adding a dash of HP sauce to your shepherd's pie, spaghetti bolognese, or even in beef burgers can give your dish a little extra flavour. It is particularly good with shepherd's pie as it mixes with the potatoes and the vegetables to add a tangy kick to your dish. 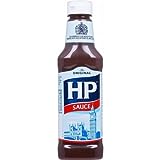 Other possibilities include adding HP sauce to baked potatoes, casseroles, stews, or using it as a marinade for meat and vegetables. HP brown sauce is a source of endless possibilities that bring your homemade dish from good to amazing. So what are you waiting for? Get cooking!