Enjoy This Cereal with Milk Or Juice

The Story Behind My Power Cereal

This cereal began as a diet food. A few years back my husband knew he needed to lose weight before his hip surgery. His doctor recommended that he eat 2/3 cup uncooked oatmeal for breakfast, moistened with orange juice. His doctor was a vegetarian, and he thought this would be healthy. My thought was that healthy or not, I could not conceive of eating uncooked oats -- especially not topped with orange juice. But my husband grew to enjoy it, so one day I got brave and decided to add a few uncooked oats to another cereal I normally had for breakfast, topped with nonfat milk. It was pretty good. Then I got really brave and started experimenting with combining two or more boxed cereals.

It guess it was the success of those experiments that made me decide to just try combining the oats with other things. My first attempt was to measure out the oats into the bowl and then add some dates and chopped walnuts. I topped it with skim milk. It was delicious. My husband tried it that way, too, but thought it was a bit fattening, so he went back to oats and orange juice, except when he craved a change, but I noticed he was swiping a few dates after breakfast almost daily. I went on a whole wheat toast and peanut butter binge about that same time since it was winter.

Meanwhile, his friend started extolling the virtues of buckwheat and gluten free eating. i bought some buckwheat cereal that needed to be cooked and made it into a breakfast pudding for him, and he got hooked on it. Unfortunately, I didn't enjoy it as much as he did, and when the weather got warmer I didn't want a hot breakfast. So I started experimenting with the oats again, this time adding chopped apples and blueberries, since I wanted more fiber and the phytonutrients in the fruits. When Kosta saw me eating this, he decided to try it, too, and now there are many mornings when he eats it with me.

It's not especially low calorie, which is why I call it a power breakfast. It has enough calories, protein, and fiber to keep me from getting hungry for hours. All the sugars are from the fruit itself. This is perfect for those who need to eat more fiber and for those who want all their calories to be nutrient intensive.

When I prepare this, I prepare it for two people at once in two cereal bowls, so the ingredient amounts given are for two people. As I prepare each ingredient, half of each goes into the proper bowl. I split the apple first and put half the chopped apple into each bowl. Then I distribute the other ingredients. Until I started to write this, I never thought about measuring anything. My husband keeps one of those individual applesauce containers as a measuring cup in the oatmeal container, and we always used one measure each. That works out to 2/3 cup. If you don't want to eat quite that much, you can easily move it down to 1/2 cup per person. If blueberries are not in season or are two expensive, you might want to substitute raisins. Experiment with other fruits you like. Strawberries might be good when in season and could substitute for either apples or blueberries, but I probably wouldn't put the dates in with them. This recipe is a guideline, and don't feel bound to stick to the measurements. Most of the calories are in the oats and walnuts, also the primary protein sources. I'd keep those as a base and then add any fruits you think would taste good together. I top mine with goat's milk, and Hubby still uses orange juice.

What takes the time is cutting the fruit. If your mornings are rushed, you could make this the night before and refrigerate until morning. If you live by yourself, you can eat half the apple before preparing the other ingredients and halve the amounts. On the mornings Kosta eats something else, I give him the other half apple.

Ingredients Ready to Use 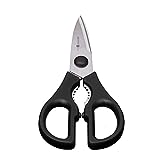 Wusthof WU5558 Kitchen Shears, 8", Black
No one serious about cooking should be without a pair of kitchen shears. They are not only great for cutting up the dates in this recipe, but I also use them to trim the sometimes unattractive edges of romaine lettuce and to trim the fat and gristle from chicken breasts and meats. These do jobs it's much more difficult to do with a knife.
Buy Now

Begin with the Bowls

That's all there is to it.

If you are a bit prejudiced against eating uncooked oats, think of this as unbaked granola without the extra sugar and processed fats you find in such products. I did a comparison with my favorite granola, which happens to be Quaker 100% Natural Granola Oats, Honey and Raisins. One cup of my power breakfast does have over twice the fat of a cup of the Quaker cereal because of the nuts, but only 1/2 of the saturated fat. Neither has any trans fats. My cereal also has 2 grams more fiber and 2 grams more protein. MIne has two more grams sugar, but none of it is refined. Quaker has brown sugar and honey in addition to the sugar in the raisins . A cup of my cereal has 350 calories compared to 412 of a cup of the Quaker cereal. My ingredients also have less processing and do not include whey, inulin, glycerin, whey protein concentrate, and other more processed ingredients. I think I get a more powerful nutrient punch calorie for calorie. And if I eat breakfast at nine I don't get hungry again until two or three, so I don't need to snack on junk food because my stomach is growling. Keep in mind the recommendation that breakfast be the biggest meal of the day, and you'll see why I have this often. It's healthy and it's hearty.