One Serving Tuna Mousse on Greens

Cast your vote for Tuna Mousse

About This Tuna Mousse Recipe

I discovered the recipe I based my Tuna Mousse recipe on in a local paper about 25 years ago. I don't remember which paper is was, but I clipped it and tried it, with some variations. My husband liked it, but when I made it today it had been so long that he'd forgotten about it. He remembered quickly once he tasted it.

Before I give you my version of this recipe, I'd like to say a bit about the ingredients. I do most, but not all, of my shopping at Trader Joe's. So I use a lot of their brands, and I've used the information from those brands when I calculated the nutritional values. I used Trader Joe's Regular Mayonnaise, and Trader Joe's Goat Milk Plain Yogurt. I also used Chicken of the Sea Chunk Light Tuna.

The cooking time for this recipe is deceptive. It doesn't cook. It chills. So it isn't really ready in 35 minutes. It takes about 2 hours to chill at the earliest. Longer is better.

Ingredients I Used for My Tuna Mousse

How to Make Tuna Mousse

I assume most people know how to best drain canned tuna, but if this is your first time to do it, here are two ways. I used to empty the can into a stainer and press the tuna with a spoon until all the liquid has drained out of it. That's the best way, but I've gotten lazy lately. Now I open the cans and retain the lids. I put the lid over the top and turn the can upside down, being careful to leave almost no space around the edges where the tuna itself could fall out. Then I squeeze and rotate until no more liquid comes out. If you have cats, drain the liquid into a bowl. They love it.

Why I Do Things in This Order

Once you have dissolved the gelatin, it will start to set, even out of the refrigerator. Since squeezing the lemon, chipping the celery and olives, draining the tuna, mincing the onion, and measuring the other ingredients takes some time, it's best to have them ready and in the bowl before you heat the softened gelatin or it might get too thick to mix well.

Making It Easier to Squeeze Lemons 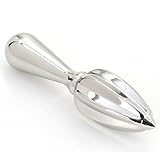 The easiest part of this is getting it into the pan. Once everything is well mixed, get a good rubber spatula and scape everything into the bowl as shown below. Once it's in the bowl, spread it evenly over the bottom of the pan, cover with plastic wrap or aluminum foil, and "bake" in the refrigerator. I recommend allowing a good four hours or overnight for best results. What's nice is you can make this the night before and have it ready for lunch the next day.

If you want to be fancier, you can put this into individual molds or a large fish shape mold. I'm too lazy to mess with molds, but this will do as well as other gelatin dishes if you want to put it out on a buffet table as a spread on a bed of greens. I think I did that once, years ago, when I entertained more than I do now.

When the mousse is sufficiently chilled, cut it evenly into 10 squares (unless you don't care about the serving sizes matching my nutritional analysis. )

About the Nutritional Analysis

The nutritional analysis does not include everything important. For those watching their sodium, one square of this has 328 mg of sodium. Although there was fiber in this, it was only in the celery, and there was not enough to count, since the chart will not show fractions. There was not enough fiber per serving to round up to 1 g.

When I served this today, we had a green salad on the side which added nutrients and fiber missing in the tuna mousse. We also spread the mousse on whole grain bread, adding more carbohydrates and fiber. I had an orange with it, since I like citrus with fish. It makes a great tuna sandwich, open-faced or between two slices of bread with lettuce and maybe a slice of onion if you like it. Use your imagination and you will find many ways to use this. Most of the time I just eat it straight off the plate with the greens I put it on. It's also good with a crisp leaf of iceberg lettuce wrapped around it.