Beef Cuts and How to Cook Them

How to Save Money When Buying Beef

If you are like me, you wonder about all of those cuts of beef; top sirloin, chuck, round steak, ribs, flank, plate, shank, the list just gets too overwhelming! Even if you can manage the list of cuts, how do you properly prepare each one so it won't turn out like an old rubber boot? Broiling, roasting, braising, and frying, how do you know which beef cut works best with what style of cooking? I had to rely on the honesty of butchers and/or market employees for these meaty answers. What I discovered is that most of the time, those employees don't really know the answer either, and getting an actual butcher to the meat aisle is not such a simple task.

With my frustrations front and center, I set out on a mission to learn for myself how to recognize and cook the many different cuts of beef, as well as learn which cuts are economical compared to those that are pretty darn expensive. This is what our lesson for today is all about, understanding the best beef cuts for your needs, as well as your wallet.

(click column header to sort results)
Some of the best dishes come from these cheaper cuts of meat!

While Some meat can be tossed on the grill for best results, other cuts should be prepared low and slow to maximize their taste and texture. Most home cooks would be creating fool-proof economical beef dishes if they actually understood the cuts of beef themselves.

This article is more of a guide, a location to learn just which of the vast packages of beef in those butcher aisle are going to best serve your application and budget. You will find a diagram that shows you the cuts, a chart for the USDA grades of beef, which cuts are the most economical and which are the most expensive cuts. You will even find an easy to manage beef recipe with every budget in mind. From ears to hooves, if you only have a couple of bucks or even a whopping roll of cash to spend, understanding the many cuts of beef brings you the culinary home advantage!

How To Tell The Expensive From Cheap Cuts of Meat

To help obtain a clear understanding of beef—meat from a steer or heifer—it is important to know where each cut of meat is located on the cow. As you are probably well aware, the more expensive cuts are going to be the highest quality meat, the medium quality meat is going cost a little less, and the fatty meat with lots of connective tissue is going to be a pretty darn cheap cut of meat.

How Are the Cuts of Beef Divided

As a general rule, wholesale beef will be cut into quarters; dividing the carcass down the middle at the spine, and across the short width of center mass to create the four quarters; two hindquarters, and two forequarters. From these quarters of beef a butcher will trim out the retail cuts we find in our market.

What Cuts Are in The Hindquarter of Beef

The Beef Hindquarter Consist of:

The hindquarter holds the most highly prized cuts of beef, like the porterhouse and sirloin steaks, which are also the most expensive cuts of beef. You will find the hindquarter to have the round, rump, loin, and flank. Let's see how each relates to quality and cost. It will be easier to see and understand the cuts if you refer to the large (color) "Beef Cuts" diagram below.

As you can see on the diagram below, this is the hind leg of the beast, and we find five specific types of meat here; top round, bottom round, sirloin tip, heel, and hind shank. Round steak is cut from the complete diameter of the leg. It's easy to recognize this cut because of the small round leg bone that is located at the center, while the meaty portion is one big muscle with three smaller muscles surrounding it.

Let's take a look at a few of the cuts and how they fall into the beef pricing game;

Located just above the round and generally weighs between 12 and 17 pounds (only about 20% of the overall round) is the hindquarter rump cut. When buying this cut, it is best to get it boned, as a great deal of bone mass resides in this cut. A wonderful surprise can be had on the sirloin side of this cut, where

small steaks that offer fantastic taste and texture hide. These delicacies are fantastic when stuffed or braised, but are also perfect for rolling!

About "%CTBRC" in the Beef Yield Grades Chart Below

Daryl Tatum, PhD, at Colorado State University, defines USDA Yield Grades as the estimated cutability of a beef carcass. The combined yield of closely trimmed, boneless retail cuts (%CTBRC) from round, loin, rib, and chuck. This estimates the amount of lean edible meat from a beef carcass.

This treasure of beefy goodness makes up a surprisingly large portion of the beast—right at 17%. The loin comes from the section of the animal located between the ribs on one end, and the round and rump on the other. It is butchered into two sections; the loin end, and the short loin. Each of these two cuts have many smaller retail cuts built in.

Even though this cut is found at the short loin of the beef, it doesn't make a great meal because of the thick grain, unless you know its secret; it is simply packed-full of flavor! (Due to the low price of this cut, learning how to properly prepare it makes it well worth the task.) The flank is a flat oblong cut, that usually is bone free and will weigh a couple of pounds at most. This cut makes the best hamburger, but when cooked over super high-heat for a short (flash-style) preparation, or cooked low and slow, then most importantly, cut across the grain it can make the most amazing beef fajitas!

Labeling the Cuts of Beef

What Cuts Are in The Forequarter of Beef

The Beef Forequarter Consist of:

The forequarters of the animal are sectioned out into four wholesale cuts, that are then butchered down into the smaller cuts we find on the meat aisle at the market. The four beef cuts found here are the rib, chuck, shank, and the plate. These cuts may be found to be a bit more budget friendly.

How Much Do You Know About Cooking The Cuts Of Beef

You will recognize this cut as the standing rib roast, rib steak, and rolled rib roast. The choicest cuts are found and cut from the location nearest the beef loin, but where the short ribs are removed. You will find the rib eye steak and "prime" rib here—which is technically miss labeled, as "prime" refers to the grade or quality of the meat and not the kind of cut—but don't be miss-led by the higher cost of these cuts. Be sure to look for the more economical cuts, too! You will find these labeled as rib ends and short ribs. When these budget friendly cuts are cooked like a pot roast or braised, the outcome is something very tasty!

Familiar cuts like boneless chuck, English cut, arm pot roast, and the blade pot roast can all be found in the largest section of the beef forequarter, known as chuck. This section of meat may need some added fat during cooking, especially if you are using the more lean pot roast cut. Sometimes you find the arm or blade can yield what is labeled as "chuck steak" in the meat aisle, this cut requires a long braise (low and slow) for optimum taste and texture.

Think of lower legs and ankles here. This section has the shank knuckle, or the upper end of the foreshank (upper-lower front leg), as well as the cross-cuts—small pieces cut across the shank bone. The knuckle makes for great stocks and rich flavored soups and stews. When the knuckle is completely cooked down, the gelatin within the bones and connecting tissues bring flavor and texture found nowhere else. The cross-cuts are best reserved as little pot roasts (after boning), or are excellent in stews and soups.

How to Oven-Cook a Brisket

This has to be the most versatile cut of beef out of all of the selections. We find this cut butchered from the underside that runs along the ribs. This is the stuff we find boiling in pots across the country. It is what we prepare our corned beef with. The best way to recognize the brisket—which is part of the plate cut—is by noticing the breast plate (bone) and the appearance of fat and lean meat. The brisket is usually found in the butcher (or market) chill chest as a boneless cut, having the breast bone, and ribs removed. Even as the brisket makes a fantastic soup, you can cook the brisket with or without the bone by boiling, braising, or stewing.

Ground Beef is also a good choice for this cut, but adding in some fat (around 20% for best flavor and texture) makes it even better. Grinding this cut (and other not-so-tender or really tough cuts) into hamburger has long been the answer to its chewy nature. By doing so, we have discovered the rich flavor and vast variety and economy of even the toughest cuts of very low cost beef. 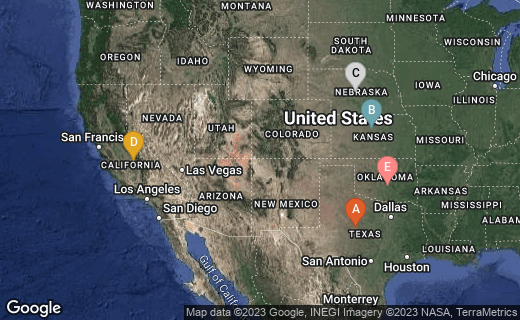 This month (June 2012) the Nebraska beef cattle industry found itself under a severe heat stress warning.

The highest quality of beef cattle handling and production is found in the state of California.

If you are looking for the most weight on the hove, than Oklahoma is the answer! They're rarely beat when it comes to the size of their cattle.

Percentage of Dressed Weight in Beef

(click column header to sort results)
*Several cuts from the shoulder, round, plate and shank, generally retail at lower levels. 3/4 of a side of beef consists of these cuts. Some of the best dishes come from these cheaper cuts of meat!

5 stars from 2 ratings of Beef Over Steam Rice

Try This Recipe With Beef

Comments for "Beef Cuts and How to Cook Them"