Brazil is the largest coffee producer in the world. In 2009 it produced almost 40 million bags of green coffee and exported over 27 million of them. Brazilian coffee is the base for the 90% of espresso coffee that in brewed on this planet. The coffee of Brazil is often called Brazilian naturals or unwashed and refers to the specific way the fruits are process after harvest.

The first coffee plant arrived in Brazil in 1727 via French Guiana hidden inside of a bouquet. It was smuggled by Francisco de Melo Palheta, a Spanish colonel, who got the plant from the wife of Guiana's Governor to whom he had a love affair.

At first, the coffee plant was cultivated for the use of country's aristocracy, around Rio the Janeiro where the labour was abundant. By 1830, the big coffee plantation, called fazendas, took advantage of increasing coffee prices and started exporting the beans. The cheap slave labour made possible the expansion of coffee cultivation. But once slavery trade was abolished in this country in 1850, the coffee plantation started using immigrants for work. (Brazil abolish slavery in 1888.)

Today, coffee is grown in 13 out of 26 states in Brazil, concentrated in three main regions in the East, West and South of the country: Mogiana, Sul Minas and Cerrado. Most coffee plantation have less the 10 hectares. It Produces 85% of arabica coffee and 15% of robusta coffee. The best variety is Bourbon Santos 2, know worldwide for it's medium body and mild flavour, with fruity accents.

Brazil produces over 30% of coffee grown in the whole world.

Brazil is the biggest country in South America and the 5th biggest in the world.

Brazilian coffee does not grow to high altitudes like in other Latin American countries. The highest altitude is 4000 ft and the lowest is 2000 feet (compered with over 5000 for some well known regions of the continent). It also lacks the rich volcanic soil that is characteristic for some great coffees from Colombia, Costa Rica or other countries. That's why Brazilian coffee is a low acid coffee, that makes it suitable for blends. This characteristic is far from making it a low grade coffee, as it is often regarded. And the fact that espresso coffee (including some of the most famous Italian brands) is made with Brazilian beans speaks about this coffee's qualities.

A coffee cherry contains two coffee beans underneath a red skin and surrounded by other layers of membranes, mucilage, and parchment. To reveal the two coffee beans the cherries have to be dried first. There are two main methods of doing it: wet and dry. The wet method uses water to wash the coffee cherries and separate the beans and the dry method lets the cherries to naturally dry under the sun. Most Brazilians farmers dry their coffee under the sun (hence the term of Brazilian naturals) thus preserving the fruity nuances of the beans.

This is the best coffee of Brazil. Regarded as a high quality coffee, it is sweet with high fruit notes and a more acidic body, compared with other Brazilian coffee.

Bourbon is the name of the variety of coffee tree and Santos refers to the port through where the coffee is shipped. 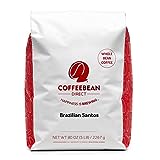 Brazilian coffee is the base for 90 percent of espresso coffee consumed worldwide. This coffee is also used by the speciality coffee industry to create unique blends. The best pure Brazilian known outside Brazil is called Bourbon Santos and it is hardly found in grocery stores, though some big retailers may carry particular packages from a specific farm or region.

Bourbon Santos can be purchased through many online shops. Coffeereview.com, the leading website among coffee specialists, has a list of most recent tasted Brazilian coffees and their scores, along with other articles and references about coffee and its brands.