How to Bake Crispy Catfish Filets

Don and his wife love to cook. They enjoy new and different recipes and experimenting with interesting combinations of ingredients.

This is another of our old "Shoebox" recipes that we have been going through and "digitizing" for easy reference in the future..

By shoebox recipe, I am talking about those shoe boxes we have kept old recipes in for decades now that are either cut out of magazines or were hand written on pieces of paper and shared with us by friends of family over the years.

I decided long ago to try and organize these great recipes and put them in a digital format on my computer. Some of them are so good, like this one, that I will be sharing them with you in the future.

So let's talk a little about this Catfish recipe an Aunt of my wifes gave us!

Catfish are bottom feeders, so what!

Once upon a time, our ancestors had to go out and catch their own fresh Catfish, if they wanted to enjoy the great flavors.

I will admit that because the Catfish is a "bottom feeder" a lot of people refuse to eat this tasty white fish, even today.

So, I always recommend that when you go out and catch a few freshwater Catfish, you should know a little bit about the waters that they come from The places to avoid are waters that have been polluted at one time or another in the past. Typically your county Fish and Game Department can fill you in on where you can fish safely.

Why is this? Because the Catfish, being a "bottom feeder", will be more susceptible to having absorbed any of these pollutants into their flesh.

In defense of the lowly Catfish though; if they do contain pollutants, then the other non-bottom-feeders will in all probability have them in their flesh also.

And honestly, today,you will find that almost all Catfish sold in supermarkets are "farm grown", which means there are no problems with them containing pollutants.

An Old Trick from my childhood:

In the old days, when I was a Kid, we would catch our Catfish in the local river and then take them home and place them in the creek behind our house.

Once these catfish had lived in the clean waters of a fresh stream for a couple of weeks, we would then take them out and have them for a delicious dinner.

Did this actually get rid of those pollutants, I really don't know for sure, but it made sense to us, at the time.

But today, the majority of the Catfish available are raised on the big Catfish "farms" popping up across the country and you will now find fresh firm-fleshed Catfish in most supermarkets around the country that are grown on these farms.

Catfish has a unique flavor, and wild catfish has a nice firmness to its meat that you wouldn't find in a farm raised Catfish..

This was because most "farmed" fish Catfish invariably had a "softer" and less firm flesh than the Wild varieties. The problem was that the fish were raised in smaller tanks and couldn't swim around very much. But, the farmers have taken heed and now raise their product in larger tanks and the filets are now as firm as a wild catfish.

Anyway, this is old shoebox recipe of ours , worked well for decades on wild catfish and will do just as well with the newer farmed varieties and will provide you with a tasty meal, every time.

NOTE: This recipe also does well on an Outdoor grill. Just be sure to watch that the temperature stays steady and be careful not to overcook the filets.

NOTE: Be aware that if you do use Saltine crackers in your recipe, then the breading will be more of a light color. If you want a more traditional brown color, use a different cracker, such as Ritz or such.

NOTE: When using fish that has been frozen, you must take the time to thaw the filets out thoroughly, to get rid of as much of the excess water as possible. Once thoroughly thawed, place the filets onto a paper towel, cover with another and press gently to remove even more water, before preparing.

NOTE: If you like a little spicy flavor in your fish, add a teaspoon or two of your favorite hot sauce, or even a little Cayenne Pepper to the Butter/Egg mixture when preparing. 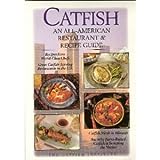 Catfish: An All-American Restaurant & Recipe Guide
I picked this book up at a flea market and I have used it several times for some different catfish recipes, and each recipe was easy to use.
Buy Now

How to Clean a Catfish