What You Need To Know About Turkish (Peynir) Cheeses

Turkey, a land known to have been home to many civilisations over thousands of years is not surprising to have a wide production of locally made cheeses.

Since the earlier times, the Turks had already known how to process and make their own cheese and produce several different varieties. As time passes, these cheeses which have been made since antiquity is passed on from generation to generation and is obviously seen today from the locally-made cheese varieties in different regions in Turkey.

The many great varieties of cheeses in Turkey may be classified according to the type of milk being produced such as raw, skimmed, pasteurised or unpasteurized, and from the which animal the milk was taken such as from the cow, goat, sheep, buffalo, horse or camel. After the cheese is processed, they are sold in long arrays over closed countertops with several varieties and can easily be found in most food or dairy sections in grocery stores and supermarkets.

Some of the other more locally known varieties are sold only within a particular region of which little has been known about their types except the locals who frequently buy them from the weekly open market areas called açık pazari. These locally made fresh, healthy and deliciously tasting cheeses are known to many who live or who have visited in that particular region where they are produced. For instance, Anatolia as well as Karadeniz in the Black Sea have its own cheese which have originated since antiquity.

Today, anyone who lives or has been to Turkey can easily tell how the Turks love to eat cheese and how the cheese itself had become part of the Turkish way of life.  Below is a list of the most popular and most commonly consumed locally made cheeses in Turkey.

As it is easily identified by its color, this white cheese called beyaz peynir in Turkish (beyaz means white and peynir means cheese) is a traditional, rindless salty cheese made from pure sheep’s milk and is considered as the most common breakfast item in a typical Turkish breakfast. It is usually sold in blocks or in slices, packed in transparent plastic containers and weighed by kilograms in most dairy sections of grocery stores and supermarkets. This type of cheese is the most popular and most consumed among all other cheeses all throughout the country. Although some regions have its own traditional way of producing white cheese which slightly differs in taste from the others. For instance, white cheese in the Marmara region of Turkey usually has a soft texture while other regions produce a grainy texture or both. Typically, beyaz peynir is used in salads, breads and pastries, various Turkish sweets and desserts, and in many varieties of local dishes. Börek, for one is a traditional type of pastry in the Turkish cuisine which uses white cheese for filling. 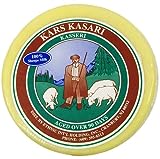 Produced mostly from sheep's milk, otlu peynir is an "herbed cheese" which belongs to the ripened variety of cheeses. It contains added herbs, salty in taste and resembles closely to white cheese. It is usually processed from raw milk and has a semi-hard texture with a salty taste and a mild aromatic smell of garlic and thyme due to its added herbs. Some varieties of otlu peynir have been flavoured with different spices such as black pepper, mint, thyme, cumin, allspice and other herbs. Otlu peynir has been manufactured in the east and southeast part of Turkey for more than 200 years. The cheese processing mostly starts in spring when the grasses are bountiful and the sheeps have plently of milk after giving birth. It is also during this season that the wild herbs from the surrounding mountains are plenty (especially in Van, a city in the East Anatolian region) and are added to the milk to make a pungent otlu cheese. After yeasting (considered to be the most important stage in making otlu peynir), the cheese becomes edible in about 2-3 months.

Usually made from fat-free milk, this protein-rich light yellow colored Turkish cheese is one of the most loved peynir among the Turks and is mostly recommended for dieters for being fat-free. Tel peyniri is a very popular cheese produce of both Eastern Anatolia and Eastern Black Sea regions of Turkey. This type of cheese easily separates into fibers when rubbed between the hands hence it got its Turkish name "tel" meaning fiber cheese.

This is another type of unsalted white cheese which is made similar from the whey left over from making kaşar peynir. After the whey is boiled and strained from the curd, the remaining protein is curdled. Lor peynir is typically used in filling börek, a kind of Turkish pastry and is also usually served for breakfast or as an appetizer mixed with various herbs and spices. It is also used as a valuable ingredient in traditional Turkish desserts.

A slightly fatty cheese produced from sheep’s or cow’s milk, kaşar peyniri is one of the most important dairy products in the Thracian region of Turkey. Fresh kaşar called kaşkaval (round shaped yellow sheep’s cheese) and matured kaşar called eski kaşar (which can be kept for up to three years) are both densely-textured cheeses native to Anatolia. Other fine kaşar cheeses are produced from Bayburt, Muş and Trabzon’s Kadırga and Tonya districts. The kaşar produced in Trakya which are made from sheep’s milk are usually moulded into drums and large wheels weighing about 11-12 kilos and are considered to be the most popular in the country. Just like the beyaz peyniri, kaşar is also one of the most widely consumed cheeses in Turkey. It is usually eaten during breakfast and are also used as a valuable ingredient for baking casseroles, desserts and toppings.

It's a hard sheep's cheese produced from Balıkesir, Bursa and other regions. Pronounced "mee-hah-lich" in Turkish, this white colored, slightly hard and crusty cheese with round holes are usually made from high-fat sheep’s milk. Due to its hard texture, it can easily be grated just like Italy’s parmesan cheese and are usually used in salads and other baked dishes.

This type of cheese is usually made from horse's or mare’s milk and is specially produced in the eastern Marmara region of Turkey. It's a light yellow colored cheese with a thick crust, has a semi-soft texture and usually tastes sour similar to Kefir. Çerkez füme (fumed cheese) is usually made low in fat from which during the process, the bottom and top of the cheese are salted. The outer surface is then fumed with smoke coming from pinewood in a special fuming area which makes the cheese to have its own unique aroma. This process also makes the cheese tastier and last longer.

This type of cheese is usually made from sheep's milk and is preserved in an animal skin bag called tulum. Regional varieties of tulum peynir come from İzmir, Ödemiş and Erzincan. Tulum cheese is made by removing the water of the curd and a crumbly texture is obtained. The crumbled curd is then salted and packed firmly in goat skins or in cloth sacks and aged for up to 3 to 6 months. During this period, the cheese starts to give taste. Tulum cheeses are also used in börek or similar foods and can be a great appetizer when mixed with walnuts.

When buying cheese, especially beyaz peynir and some other cheese varieties in Turkey, it is important to ask or specify what type of cheese you prefer as they are classified according to its fat content. For instance, tam yağlı means the cheese contain whole fat and yarım yağlı means it only contains half the fat or low in fat.

In addition, it is always advised to read the product labels as well as check the date of production (P.K.T.) and or at least the product's expiry date (son kullanma tarihi in Turkish or just S.K.T.).

Want to Make Your Own Cheese? Check these out at Amazon: