The Best Chilli con Carne Recipe In The World

This lens is entirely dedicated to one of my favourite dishes - Chilli Con Carne. Here you can find Chilli recipes, the history of the dish, great things to have chilli with and much much more.

Chilli con Carne has to be one of my favourite dishes as its sooo tasty, cheap, healthy and easy to make! It literally ticks every box when it comes to food. You can also have chilli either on its own, with rice, potatoes, pasta, nachos, stuffed into potatoes...the list goes on (below!)

Check out my page anyway and don't forget to leave a message to let me know what you think.

The History of Chilli con Carne

The name "chili con carne" is a variation of the Spanish chile con carne, which means "peppers with meat." Chili con carne is the official dish of the U.S. state of Texas. It can be found worldwide in local variations and also in certain American-style fast food restaurants.

Some say that chili was invented in Mexico during the 1840s, possibly in Chihuahua, as a complimentary dish served at cantinas for outsiders, who wanted something spicy and cheap. Others contend it was born in Ensenada, Mexico in the 1880's as a way of stretching available meat in the kitchens of poor Tejanos. Many Texans maintain that it was the invention of Texas cowhands who ate it by the bucketful as the drove their herds across the plains. The most imaginative origin traces its roots back to pre-Columbian Aztec chefs.

What is known for a fact is that in the 1880's, colorfully-dressed Hispanic women called "Chili Queens" began to operate around Military Plaza and other high traffic public places in downtown San Antonio, Texas, where they would reheat cast iron pots of pre-cooked chili and sell it by the bowl.

Sanitation laws in the late 30's shut down the Chili Queens, but not the public appetite for this tasty Western dish. Chili parlors opened by hundreds. These small, family-run chili joints spread from Texas to the rest of the USA, and became a part of the pre-WWII American landscape. Even today hardly any American who claims to be able to cook doesn't have their very own secrete recipe for chili, whether it be hot, sweet, thick, soupy or just plain odd.

Regional variations add a certain level of enjoyment for chili lovers. Traditional Texas style chili is thick and uses few to no vegetables. New Mexico chili is famed for it's thinner consistency and the use of green rather than red chili peppers. In the chili in Cincinnati, Ohio has a sauce like quality and is used as a condiment or topping for hotdogs or spaghetti.

White chili uses no tomato and relies on beans. Vegetarian chili (chile sin carne) is, of course, meatless. Health conscious chili ditches the suet and substitutes white button mushrooms for beans to lower the calories. In fact, chili is such a malleable dish that it can be hard to define. Still, most people know it when they taste it, and are all to happy to do so.

There is quite a lot going in to this but try not to miss anything out of this secret Chilli con Carne recipe! I have made the instructions as simple as possible and tried to keep the steps to a minimum.

Sprinkle of salt and pepper

1 small bunch of fresh coriander and

Use a large pan (probably the largest you have) with a nice lid.

If the chilli become to dry at any point just add a bit of water. Serve with coriander leaves sprinkled over.

See below for great serving ideas!

...of adding the chocolate! chilli and choc is a ancient Aztec food combination!

Chillis in the Amazon... - Chilli stuff 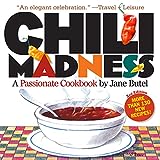 Chocolate or Not? - You Decide!

Should you add the chocolate to the recipe, have you tried it? Is it a good combo?