This is the fourth article on coconut oil. The others are the following:

Ketone Found in Coconut Oil Improves Brain Disorders From Alzheimer's and Dementia to Autism and Epilepsy and More;

Seven Easy Ways To Add More Coconut Oil Into Your Diet To Gain The Health Benefits And Ketones ;

Can You Lose Weight By Eating Coconut Oil?

Dr. Fife already claims that coconut oil is a medical miracle for heart disease (lowering cholesterol). Dr. Newport in her 2008 article called “What If There Was A Cure For Alzheimer’s Disease And No One Knew?” dramatically documents her husband's improvement in just three short weeks. You might be asking this question, what else is coconut oil good for?

Caretakers and parents of epileptic patients are increasingly administering coconut oil to the patients for the ketone benefits. Although not entirely free of seizures, some parents claim that they have seen an improvement and have written about it on epilepsyfoundation.ning.com.

According to Earthclinic.com, Some claim that by taking 1 tablespoon per day in their coffee, they have eliminated the use of 4 painkillers to relieve their headaches and saw such improvement after 2 days of taking the coconut oil.One person claimed a feeling of well-being within one hour of taking coconut oil.

3. Candida or Yeast Infection or Other Fungal Infections

Also Earthclinic.com, some claim a cure for candida, which is a medical problem of having too much yeast or fungus in the system. Dr. Fife also wrote an article on Candida and Virgin Coconut Oil and describe the cure to include athlete's foot and other skin rashes. Coconut oil also helps thrush, another fungal disease, resulting in white patch on the tongue.

When a person's thyroid gland is underactive, they feel a bit sluggish, and body temperature and metabolism tend to slow down. Additionally, they may have these other symptoms:

By taking coconut oil, you will restore your metabolism and improve your thyroid's functions.

Some baby food have lauric acid, which is a fat in similar amounts to human breast milk fats, to protect babies and builds up the baby's immune system. Dr. Daniel Hwang, a research molecular biologist specializing in lauric acid at the Western Human Nutrition Research Center at the University of California, Davis was quoted in the New York Times March 1, 2011 article Once a Villain, Coconut Oil Charms the Health Food World for saying: "Coconut is good food, in moderation." Coconut oil does not hurt those who have their gallbladder removed.

Because of its gentle and protective effects and qualities, hospital put coconut oil in patients' food, especially those with intestinal trauma or after major intestinal operations. It also has lubricating properties for constipation.

Whatever the body does not use is extracted and converted to glycogen as required for energy, and the unneeded oil is then excreted directly and not stored. The glycogen, which can convert into energy directly, is so useful for diabetics.

8. Sunscreen, Dry Skin and Skin Problems Such As Pimples and Dandruff

Coconut oil has been known to treat skin diseases and even acne. Even though some have claimed that their pimples had become worse, there is a period of a month before any improvement can be seen. It has helped dermatitis and is a wonderful natural sunscreen. I am pretty happy about this because I can never tell when my SPF sunscreen wears off and is no longer effective.

Further, it can be used to rid dandruff, which is a form of seborrheic dermatitis. Melt a teaspoon and massage into the scalp. Leave in for 15 minutes and then wash with non-harsh shampoo. Additionally, you have given yourself a hot oil treatment for your hair.

Coconut oil is good for your dog's coat as well as even possible arthritis. 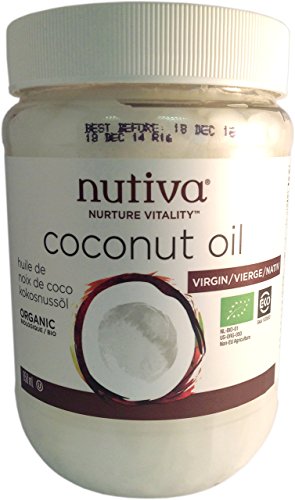