Cooking Dinner for a Large Group of Neighbors, Cohousing Style

Seafarer Mama/Karen and her family are members of an intentional community in Massachusetts and love the company of their neighbors.

Preparing a Tasty Meal for the Community Table

Yesterday evening I served as "Assistant Cook" to my friend Rich for our community's Common Dinner. We live in a co-housing community called Mosaic Commons, located in central Massachusetts, and each week most neighbors meet to nurture our community spirit by spending time with each other over meals. Most of the time that meal is dinner, but at least twice a month there is a common brunch. We also hold "pot lucks,"

The Common Meal is different than a "potluck" because one or two people shop for and prepare a specific meal, of which the rest of the community members buy a portion. That money is placed into a special account for reimbursing cooks and/or planning parties to celebrate special occasions significant to the whole community. Preparing the meal is a labor of love for the cooks and assistant cooks because that preparation is for a large number of people. The Cooks, who take on the lion's share of the work, do so because they love to cook, and there is a specific type of food that they love cooking.

The first step in preparing the community meal is for the "head" Cook to choose the type of meal that s/he would like to cook and to announce online her/his intentions. The community has a week to sign up and when the deadline is reached, the sign-up process is closed so that the cook has a clear idea of how many people to shop for.

Once the Cook knows how many people would like to attend the meal and what they would like, s/he shops for the meal and then prepares it. There is usually a vegetarian option and a carnivore option, An adaptation for vegan eaters is often made, and for those who eat a gluten free diet.

Our kitchen follows the ServeSafe standards for commercial and community kitchens, so there are rules about using separate cutting boards for chopping meat from those used for cutting other ingredients, which sinks are used for specific purposes (washing hands v. washing food), and which refrigerator to store the food before and after the meal (we have two: a "raw food" fridge and a "cooked food" fridge). Given these rules, the cooks happily work at chopping and cooking until it is time to serve the meal at 6:45pm, when the dinner bell is rung to invite our fellow community members to eat.

Rich chose a meal that gives the community a wide range of options: burritos. He cooked a black bean, vegetable, and onion filling and two types of rice. He also prepared steamed kale, a garden salad and a fruit salad. I prepared the meat option: chicken breasts marinated in lime juice and grilled with onions and cilantro. I also baked apple slices with cinnamon, allspice, and cloves. I did not use sugar so that anyone with diabetes could also eat the dessert, which warmed hearts and stomachs on a cold, rainy night.

Meals are Close to the Heart of Community Life:

My daughter also likes to help in the kitchen, and co-housing philosophy encourages the involvement of all members of the community, regardless of age. For that purpose, there is a step stool that lives in the kitchen for the use of the shorter kitchen help. Hence, my daughter eagerly participated in the meal preparation process in the following ways:

1.) Took the peels off the onions after the ends were cut off by Rich.

2.) Used a peeler to peel the skin off the carrots and cucumbers for Rich.

3.) Separated the cilantro leaves from the stems for me to chop.

4.) Cored apples for the baked dessert I prepared, using an apple coring and slicing tool.

More about children in the kitchen

If children become involved in designing a meal, they experience the support of the entire community. One young man designed a meal inspired by the "Minecraft" game, which he and his family prepared. Many of our neighbors attended. It was a great meal. 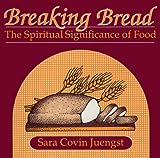 Breaking Bread: The Spiritual Significance of Food
Humans have bonded over meals for thousands of years. It is part of our DNA. This book explores deeply how spiritual connections are forged through sharing bread together.
Buy Now

In addition to preparing the meal, Cooks and Assistant cooks have other tasks to attend to. Preparing the tables with tablecloths, setting salt and pepper shakers on each of them, and setting chairs around them is one, which my daughter also helped with. We also set out trivets to place pots full of hot food upon, placed serving utensils nearby each trivet, and placed an index card describing each dish and its ingredients.

When all the food is cooked, the Assistant Cook is responsible for preparing "late plates" for community members who would like to eat a portion of the meal but will not arrive home in time to eat with the rest of the community. Those who work long hours during the week like to take advantage of this courtesy, as do those who like to sleep in on the weekends when a community Breakfast, Brunch, or Lunch is served.

At 6:45pm, the Cook and Assistant Cook(s) have the chance to sit with fellow community members to chat and enjoy the meal they have prepared. Food is marked if it is prepared for community members with special dietary needs; vegetarian, vegan, GF, nut-free, etc. If there is extra food to take out of the oven, we do so as it is needed, but for the most part our job is done and there is a separate group of volunteers who kindly clean up after the meal is eaten and most people have left to continue the rest of their evening at home. Some move to another room of the Common House to sip tea, play games, or watch a movie.

The Cohousing Spirit in Traditional Neighborhoods

There is a new movement to create community in traditional neighborhoods that have become fragmented due to the increased busyness of everyone's lives. Residents of both urban and suburban neighborhoods have felt a lack of cohesive community that they desire to change. Because of this, many neighborhoods have organized meals for their blocks or streets, which usually function as "pot lucks" Each house takes a turn at hosting one, either inside their home or outside in their yard. Some communities have organized gatherings that function as "common meals" at community centers. Once neighbors connect over these meals, there are more friendly faces smiling and waving to each other on the street. Families with children who are close in age and enjoy playing together sometimes swap child care in order to save money. These neighborhoods have re-created aspects of cohousing without having to move to a new home. They have created a Community spirit that is a hallmark of cohousing without having to build a new development. They have taken the layout of the neighborhood that already exists around them and made that place warmer and more hospitable than it had been before. This process is very hospitable to the environment, as well, for it keeps natural habitats intact for the other species of the neighborhood to live in. So, if you are curious about co-housing, there are ways to experiment with the idea from the comfort of the home that you already own (or rent).