The Origins and Synonyms for the Starfruit

The starfruit originated somewhere in Southeast Asia or nearby Pacific Islands. It is now distributed worldwide in tropical and subtropical climates. The fruit comes from a small tree, and in the province of Guanacaste, in northwest Costa Rica, the fruits mature in early December. They mature later in the mountainous areas, as am writing this in late January and they are still abundant in the Liberia Farmer's market. So, the season for fresh-picked fruits in the Northern Hemisphere may range from December to February.

In Costa Rica, the starfruit is called carambola, although some may call it tiriguro. In other Spanish-speaking countries it may be called carambolo, pepino de la India ( El Salvador); carambolera, caramboler or árbol de pepino (Mexico); and in Venezuela it is tamarindo dulce or tamarindo chino. The Latin name for the tree is Averrhoa carambola.

There are many recipes for the use of this tart and unusual fruit. You are only limited by your imagination. I regularly prepare a drink from it. Starfruit is also used as a garnish on salads, made into jam or relishes, cooked as a component of curries, stews, pies or puddings. In Thailand, shrimp is boiled with sliced immature fruit. Immature fruit can be eaten as a vegetable or made into pickles or preserves. In Jamaica, ripe fruits can be dried.

Below, I share recipes of this Vitamin C-rich fruit from Costa Rica: starfruit jam, a drink and a hot vinegar sauce. 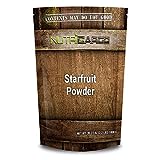 Water (so the volume of fruit juice equals about 9 cups)

Juice of one lime

Cut each of the starfruit into three pieces and put in a blender. Add a minimal amount of water to help liquify them. Strain the blended fruits through a strainer and then put the juice in a pot under medium heat. Add the sugar, the lime juice and the pectin before it gets hot. Bring the juice to a slow boil and stir constantly as it thickens. When you can see the bottom of the pot while stirring, the jam will be ready. Put into hot, sterilized jars and with new, sterilized lids.

In Costa Rica, they call drinks refrescos. Drinks from fruits are called refrescos naturales to differentiate them from carbonated drinks. So, here is a recipe for a refresco natural made from carambola:

Take four starfruit, wash them and if there are green edges on the fruit, trim that off. Slice the fruit into thirds and toss in a blender. Add water to the 4-cup mark and blend to bits. It won't take long, perhaps 15-20 seconds at most. Pour the pureed fruit into a strainer that is positioned over a pitcher to remove the seeds and pulp.

To sweeten, you can use sugar substitutes to and equivalent of 4 heaping teaspoons of sugar. Drinking this without sweetener would be a very mouth-puckering experience.

Making a batido (shake) with carambola. Ticos (Costa Ricans) make many types of batidos, mixing fruits, water or milk, sugar and sometimes oats. This is a recipe I tried recently that came out just perfectly:

Get out the blender and throw in one peeled banana and a starfruit. Be sure to take out the seeds of the starfruit first, though. Add 1/2 -3/4 cup of oatmeal, 2-3 heaping tablespoons of sugar, 2-3 cups of milk and some water so the blender is about 2/3 full. Add 1 teaspoon of cinnamon and a dash of vanilla. Lastly, put in some ice so the blender is about 3/4 full. Blend until the ice is crushed. You will end up with a really nice, healthy smoothie. For variations, you can substitute different fruits like papaya, watermelon, etc. I recommend eating papaya in this manner because it is more palatable when it hides behind other flavors. Many people don't like to eat it plain.

The Hottest Chile Pepper There Is

Chilero with Starfruit, a Salsa Picante

Back in Central and East Texas, where I was raised, folks put hot pepper sauce on their peas and greens. This hot pepper sauce was usually just cayenne peppers and vinegar. Sweet banana peppers were sometimes added to tone down the fire.

Many Costa Rican restaurants have large jars of chilero or chile, a more fancy version of the Texan hot pepper sauce. The spiciness comes from the habanero (they call them chiles panameños locally) peppers and several other vegetables are added. The following recipe uses starfruit for a little extra flavor.

Combine all the vegetables, peppers and enough vinegar to fill the container(s). Use sterilized jars, by the way. Keep this mixture in the refrigerator for two weeks to allow all the flavors and the capsisic acid (what makes a pepper hot) to intermingle. It keeps for up to 3-4 months. Put drops or teaspoons (if you are less sensitive to the heat) of the chilero over beans, rice and vegetables, depending on your tolerance for heat.

One of the reasons the starfruit is so tart is the presence of significant amounts oxalic acid. Relatively speaking, it has less of this acid than spinach and about a similar amount as rhubarb.

The presence of oxalic acid means that if you have bad kidneys, don't consume the fruit. With healthy kidneys, the oxalic acid is removed from the blood and it goes to the urinary tract. For more information on the specific symptoms of oxalic acid toxicity see the third reference below, published by nutritionists from the University of Hawaii at Manoa.