Culinary Techniques with Phyllo Dough: How to Use Filo (Phyllo) Dough

More and more folks are discovering in their voyage through culinary basics that there are healthier alternatives to some old standards that we have used for years.

Case in point - phyllo dough. Also called filo dough or fillo dough, this delicate little paper-thin dough packs a great punch. It is being used more and more in appetizers, entrees such as phyllo-wrapped meats to give a delicate crispy covering, and desserts!

This is one of my favorite recipes - phyllo dough pizza with feta and basil.

Phyllo dough is very low in carbs and very low in calories. It is also extremely low in sodium. It has no saturated fat, no cholesterol and no trans fat.

Phyllo dough is a Turkish or Greek dough made with flour, water, a small amount of oil or white vinegar and sometimes egg yolks.

It is best not to try to make your own phyllo dough because due to its paper thin nature, the best place to make it is with machines. The layers are continually floured to prevent tearing and are rolled in huge sheets with a long roller.

Baklava is one of the most popular desserts made with phyllo dough though all kinds of recipes and traditional recipes around the world are made with this paper thin, flaky dough.

If you watch the video, you will know why it is probably best to not make your phyllo dough from scratch. As much as I love making foods from scratch, this is really hard!

Culinary Basics - How to Make a Phyllo Parcel 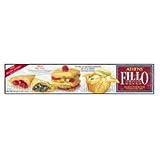 The most important thing to remember when using phyllo dough in any recipe or creating one is that it is a paper thin medium.

If you are using a recipe with phyllo dough, never try to thaw it out the same day and use - make sure you allow 24 hours for it to thaw in the fridge properly and then proceed with the recipe.

When you are ready to create your recipe with phyllo dough, keep in mind that you will work with 1 sheet of phyllo dough at a time. Keep the other sheets that are thawed covered with plastic wrap covered loosely with a moistened towel to keep from drying out.

The technique most often used is stacking with phyllo dough. This is where you take out a sheet ('leaf' in Greek), you coat it with oil or brush on a bit of butter (or nowadays spray with olive oil ever so lightly), then add another layer. Phyllo dough is all about the layers and how many you use is usually dictated by the recipe or by you - the recipe creator!

You don't want to add too much oil or butter though or the pastry will be greasy.

Phyllo dough by its very nature is extremely thin and pliable - also very easily torn. In most recipes though, if you are layering it, tears can be compensated with by just piecing together.

Summing It Up on Phyllo Dough

Phyllo dough is a very delicate and delicious substitute for traditional pie and pastry dough. You do have to know how to work with it - keep the extra sheets covered with plastic wrap and a damp dish towel to keep it from drying out.

What you will find when you use phyllo dough is a light and airy addition or variation to your recipe. Phyllo dough tarts or pies are melt-in-your-mouth kind of desserts.

Strudel is a wonderful phyllo dough recipe and it is really very simple to make.

While you may want to try to make phyllo dough from scratch, it is a tedious process but you can do it! Any way you come at it though, phyllo dough is an up and coming ingredient in the world of culinary basics!