A Guide to the Best (& Worst) Cupcake Containers

For a short and glorious period of my life, I would regularly carry about 116 cupcakes down a hill to my apartment. These cupcakes were carefully boxed and layered into two large paper bags. Those bags became so heavy that I would sometimes want to yell in pain, because the thin paper handles dug into my skin. Did I still carry those cupcakes home? You bet I did. But I also learned a thing or two about what to look for in a good cupcake container.

After working at a cupcake shop, I can tell you there are hundreds, if not thousands of things that can happen to those beautiful, precious little confectionary treats, and that not all cupcake containers are created equal. What follows is a guide to the best and worst cupcake containers, as well as an overview of the sorts of mishaps you should plan for and attempt to prevent. I hope you find it useful!

When transporting cupcakes from Point A to Point B, there are a couple of things that are most likely to happen. Whilst working at a cupcake shop, the most common causes of untimely cupcake death included:

There are many, many other ways in which a cupcake will meet its death... but that is for another guide.

The Best Cupcake Containers for Travel

If you want to protect a cupcake while you travel... all I can do is wish you good luck and warn you that there will be casualties. Cupcakes are, by default, delicate creatures. They do not take well to movement, bumping, vibrations, and other forms of light movement.

The best cupcake containers for travel are ones with high walls and a low footprint. You're most likely to see success if you only port one cupcake from one place to another. Why? Because you can hold that container in your hand and keep your eye on it the whole time.

The Range Kleen cupcake holder (which I personally own and use on a regular basis) is great for those times when you know there will be turbulence- it actually contains a little spike on the inside designed to hold the cake down and minimize damage. The Cupcake to Go Storage Container for one cupcake is a prettier option, and great for gifts.

If you're going to travel with multiple cupcakes at once, I suggest using a multi-tiered container that offers high walls around the cake portion of each cupcake to reduce movement. The Cupcake Courrier and the Progressive International models to the right are two great options.

It is important to go with multi-tiered cupcake containers when traveling because they are easier to carry- you can hold them closer to your body, and they are less likely to brush up against something else as you carry them around. What's more, taller stands are easier to snap into a seatbelt in a car or squeeze onto a car floor than their wider sisters, so they're less likely to go flying when you are forced to make a sudden stop while driving. 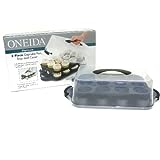 Alas, there is little a container can do to protect cupcakes from warm or cold temperatures, but the ones I've shared in the above section, plus the Oneida case to the right, have good, positive seals that can do some of the work.

The best thing you can do to protect cupcakes on the move is to keep them out of direct sunlight, away from high heat, and away from the fridge (refrigeration dries sponge cake out. If you must preserve cupcakes for a long period of time, freeze them). Cool, dark places are a cupcake's best friend.

If you have fat fingers or lack the experienced finesse necessary for safe boxing and unboxing of cupcakes, you're going to want to use a container that minimizes the extent to which your fingers will have to reach around the icing to reach the cake part of the treat while moving the cupcake to and from its transport container.

Your best single cupcake option is the Cup-A-Cake cotnainer, which cracks open down the center, sparing you the danger of reaching around the icing altogether.

Your best multiple cupcake container option is the Wilton Ultimate, as it offers relatively more space between each cupcake, which reduces the risk of your fingers mussing up the icing.

The worst cupcake container of all is just a plain old cake box without any special inserts. This is the sort of box in which I would carry home free leftover cupcakes at the end of the day. The problem with these boxes is that they are susceptible to heat, cold, the elements, and crushing. What's more, the only way you can prevent cupcakes from getting entirely messed up is to over-pack the boxes, and such cannot be done without causing damage to at least some of the cupcakes placed around the edges.

Single serve cardboard boxes for cupcakes are also a death warrant for any poor unsuspecting cupcake that might be placed inside them. Should the cake make it through the transport stage unharmed (unlikely- these boxes rarely provide any sort of internal support, so the cupcake is likely to slide around and smudge icing everywhere), it will almost certainly get smudged as the recipient attempts to remove the cake from the box.

Disposable boxes are just lame in general. What kind of environmentally sustainable choice is a single-use food container??? That said, the reusable Rubbermaid food storage container, which is apparently a popular Amazon buy for those looking for cupcake containers, is another bad idea. Though this container could be used for many sorts of dishes, it still means death and ruination for cupcakes, so stay away from it, kids. Stay away.