It is incorrect to use the terms fast food, junk food, and street food interchangeably, yet we do. The three categories overlap each other in many ways, but they are distinctively different. For instance, you can grab-and-go with street food just as you can with fast food and junk food, but street food can be fresher and healthier. How else do these foods differ from each other?

Fast food is defined as quick, convenient food that is easily accessible, requires little preparation, and is inexpensive. Typically, it is purchased from a fast food restaurant chain by placing an order at a counter or drive-through.

Junk food is also defined as quick, convenient, accessible, and cheap. But such foods consist mainly of what is termed empty calories because the nutritional content is poor. They can be purchased from just about anywhere food and/ or other items are sold.

Street food too is generally quick, convenient, and inexpensive. It is readily obtained from a cart or truck parked on a street, or from temporary stands at fairs and marketplaces. Quite often, there are strong cultural ties.

Fast food companies spend billions of dollars on advertisement that mainly target teenagers and young children. Parents, particularly those of low economic status, welcome the ability to purchase very inexpensive food. Folks who do not have the time or ability to prepare a home-cooked meal for themselves or their families are also happy to turn to the fast food industry. But these foods are mostly unhealthy. Fast foods are loaded with bad fats, cholesterol, sodium, refined sugars, other carbohydrates, and calories.

Some chains have added salads, vegetables, fruit, and other healthy foods to their menus. They also offer healthier choices in food preparation such as grilling and broiling. But the image of two juicy hamburgers topped with bacon, cheese, mayonnaise, and ketchup looks a lot more attractive in their ads than an image of grilled chicken with lettuce and tomato. Throw in some toy or other trinket and they’ve hooked your child and you line and sinker.

Junk food also targets children. The deliberate addition of colors makes it visually appealing, while flavor enhancements and textures whet the appetite for over-consumption. The trans and saturated fats, sugars, sodium, calories, preservatives (to ensure the longest possible shelf life), and other artificial ingredients render no health benefits at all.

Street food, believe it or not, can be a healthier choice. Vendors lean more toward providing a tasty sample of authentic ethnic and/ or regional foods at cheaper prices. This is good economics for citizens at the poverty level and tourists alike. It is usually made fresh with local ingredients, and often right in front of you.

Street food is available in just about every country and continent on the planet: United States (U.S.), Canada, Central and South America, Europe, Africa, Middle East, Asia, Australia, and the Caribbean. Growing up in the Republic of Trinidad and Tobago, a Caribbean island located near the northeastern coast of Venezuela, I recall the many occasions when my parents would take my siblings and me to the savannah or park for coconut water and Doubles (an East Indian delicacy) or to a stall on the beach for fish and chips (fries).

Often, immigrants bring these recipes with them to their new homeland and turn it into a business. The Street Vendor Project of New York City determined that over 80 percent of their street food is sold by people from at least 20 different countries.

Advantages of eating fast foods include the obvious savings of time and money. You may be too busy to cook, don’t know how to cook, or simply dislike the process. You may be of low economic status or have too many mouths to feed, so fast foods prove ideal.

The disadvantages are that the unhealthy ingredients can lead to a host of health issues for both you and your family, which could cost you more in the future. Documentation from research abound showing that excessive consumption of fast foods is the cause of high blood pressure, cardiovascular diseases, diabetes, and obesity.

The advantages of consuming junk food are similar to those of fast foods. It is also easier to eat just about anywhere, including on-the-go. Disadvantages too are similar, but there are additional additives, including artificial coloring, high fructose corn syrup, sugar substitutes, all of which may be carcinogenic.

Street foods are also convenient, easily accessible, cheap, and depending on what you purchase, can provide more or better nutrition. Many of them are made with fresh vegetables, fruits, and grains with cooking techniques such as boiling and grilling. They can provide you with essential vitamins, minerals, protein, and other nutrients. Besides the disadvantages already mentioned, another concern with street food has to do with preparation, especially in foreign countries that may not have strict laws. If not washed properly, left unrefrigerated, prepared or cooked in/ with unclean equipment or water, is under-cooked, or the vendor is not keen on personal hygiene, consumption of street foods can lead to botulism from Salmonella and the E. coli bacteria as well as other diseases.

2. Substitute the mayonnaise and creamy sauces in your fast foods for something with fewer calories or simply leave them out.

3. Eat leaner meats, whole grain breads, half the bun, one hamburger instead of two, and make sure it’s broiled not fried. You also don’t need the bacon or extra cheese. Leave dessert on the menu or if you must, share it with others.

5. In 2010, the U.S. Food and Drug Administration proposed that fast food restaurants with 20 plus chains include the nutritional value of the foods items on their menus. Some states already require it. So, you can study the menus to find the foods that are low in calories and/ or have more nutrition.

6. Try to consume a healthier, well-balanced diet more often. With a little research you can find the produce vendors and supermarkets in your area that have sales and discounts on fruits, vegetables, and healthy grains.

7. Consume street foods as a special treat. Before you purchase though, observe the sanitary conditions of the ingredients, equipment, cooking techniques, cook/vendor, and housing. Also, make sure the food is well-cooked. If it is something you haven’t eaten before, try the smallest sample.

What is your favorite fast food? 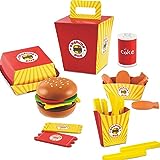 What is your favorite junk food?

What is your favorite street food?