Different ways to eat Vegemite - what is Vegemite and how do you go about eating it? - includes some delicious recipes

Vegemite is an Australian institution.

Many non-Aussies or those not brought up eating this salty yeast-extract spread are curious as to what exactly it tastes like.

And for good reason. It doesn't feature the most appealing aesthetic qualities but this dark brown food 'paste' really packs a punch of flavour unlike any other.

There have been various copies of the Vegemite spread popping up on the market over the years, including US-owned Promite, as well as Marmite which is available in the UK, South Africa and New Zealand and it is also similar to a product available in Switzerland called Cenovis. However, Vegemite is the original and to almost every Australian - the best.

For those who enjoy salty flavours and in particular, savoury spreads and snacks, Vegemite is a true favourite. Some say that it is an acquired taste and others argue that many Australians only enjoy the taste due to the fact that they have been introduced to it at an early age and have practically grown up eating it in all manner of ways.

As many non-Australians have probably come to realise, when some Australians introduce Vegemite to someone from overseas for the first time, it has become a common occurrence to play a trick on the unsuspecting first-time-Vegemite-taster and spread far too much of it on the slice of bread, toast, sandwich or cracker which produces a far too strong flavour-hit and usually results in the person spitting it out and proclaiming the horrid taste of the stuff! Yet as we all know here in Australia, you only require the tiniest amount of the spread to produce the desired flavour on whatever piece of bread or dry biscuit (Australian term for cracker) you choose to spread the Vegemite on. Any more than an extremely thin scraping and you end up with a far too salty, overbearing and some say even bitter, taste in your mouth.

So remember, you only need a LITTLE bit. Go overboard and the taste is pretty much ruined! So, don't let an Aussie trick you into eating too much of it at once - you probably won't like it! Less really is more when it comes to Vegemite. That's the Number 1 golden rule with Vege.!

This is the reason why it's such an economical food to buy - it can take years to finish a large jar! It also keeps for an incredible amount of time too so there's so need to worry about finishing it quickly or refrigerating it either. So in that sense it's incredibly different to honey, jam (Australian word for jelly) or peanut butter.

How much is too much Vegemite to use?

Here's some visual examples of how you should spread Vegemite so as to not overpower your tastebuds with too much of the strong, salty flavour.

Way too much Vegemite

So, now that that's all out of the way... how exactly does one consume the famous Vegemite? And what are the different methods that Aussies like to use to enjoy Vegemite?

Arguably the most popular way of consuming Vegemite.  Typically butter or margarine is spread on the bread first like you would when making a regular sandwich

Vegemite sandwiches are a popular school lunch choice for Australian school kids as they are so quick and easy to prepare, it is relative healthy as Vegemite has a high Vitamin B content (but it is quite salty so it cannot be considered a health food) and it is a good sandwich filling choice as it doesn't cause the bread to go soggy before lunchtime comes around.

Add some cheese to your Vegemite sandwich

For those who are game

For something a bit different

How to make a traditional Vegemite sandwich

... or 'sanga' / 'sanger' as sandwich is sometimes shortened to in Australia. (fun fact!)

A Vegemite sandwich makes a quick, easy snack for kids and adults alike. All you need is bread and butter which everyone always has on hand (or margarine if you prefer, or none if you don't want to use any butter or marg. at all) ...and of course a jar of Vegemite which lasts for ages in the cupboard and never seems to run out!

1) Butter one side of 2 slices of any bread you like (wholemeal/wholewheat or wholegrain bread if you like) but plain white bread is the traditional bread to use when making a Vegemite sandwich the Australian way.

2) Spread a thin layer (remember, a little goes a LONG way!) of Vegemite on top of the buttered sides of the bread using a butter knife.

4) Put the two pieces of bread together and enjoy your Vegemite sandwich!

And that's how you make a 'Vegemite sanga' the Aussie way! Yum!

Hot buttered Vegemite on toast is possibly the second most popular way of eating Vegemite.  It is an extremely popular and regularly consumed breakfast food in many Australian households but it also makes a tasty snack at any time of the day.

As we know Vegemite is one of the richest known sources of Vitamin B so adding it to a grain bread or a rye loaf is a great way of getting your requirements of Vitamin-B.  Vegemite toast on a cold day makes a fantastic energy boost too.

To make Vegemite toast just toast 2 slices of bread the way you normally would and then butter the slices as soon as they come out of the toaster - there's nothing better than melted butter on bread combined with the salty tang on Vegemite to wake you up in the morning or curb your afternoon hunger on a crisp day when you don't feel like a cold salad sandwich!

Vegemite toast goes brilliantly with a fresh glass of orange juice or a glass of milk as a breakfast food.

Vegemite crackers (or biscuits or dry biscuits, as crackers are often called in Australia) are another popular way of having Vegemite as a snack.

Vegemite (and often butter or margarine first) spread on crackers, wheat wafers, Saladas, or rye crackers is an alternative to eating Vegemite on bread or toast.

Another Aussie breakfast favourite... Vegemite on a crumpet!  Using the same method as with Vegemite on toast or Vegemite on crackers, it makes a tasty spread on top of hot buttered crumpets.

Vegemite and cheese scrolls or pastries...

...Or cheesymite scrolls, have become a popular bakery item and home-baked savoury treat or lunch food. They combine the perfect match of flavours - Vegemite & cheese - wrapped inside a bread scroll.

Some people also like to wrap the Vegemite and cheese layers inside a pastry case of some kind - either a regular scroll type spiral, puff pastry squares or puff pastry twists.

Whichever you choose, you will end up with Vegemite flavoured melted cheese encased in a warm, soft bread roll or pastry case.

So you want to make CheesyMite scrolls at home? Here's how...

Feel free to use any dough recipe you like to make the scrolls (if you have a bread machine, you can use the dough setting to make this dough), but this is the recipe that I use to prepare the dough for the Vegemite Cheesymite scrolls -

Putting Together The Scrolls-

Once the hour is up, remove the dough from bowl and use a rolling pin to roll it out into a large square.

Then spread a layer of Vegemite over the dough.

Cover with grated cheese and roll the dough up into a log.

Cut the roll into segments. I usually like to cut it into around eight scrolls. Place the scrolls down on a baking tray lined with baking paper.

Put the tray in a warm place for further rising. When the weather is warm I leave them to rise for an hour but in colder weather they rise slower so I leave them for an hour and a half or so.

Bake at 200 degrees celsius (or around 400 degrees F, or a little bit less if you have a fan-forced oven or a very hot oven) for approximately 15 minutes, or a couple of minutes less if you prefer your scrolls extremely soft or a little less baked.

Don't have time to make your own dough? If you want a faster alternative that is just as good, you can use a ready-made sheet of puff pastry. You use the same method as above for putting them together but bake them at 220 degrees C (that's about 420/425 F) for about 20 minutes.

Cheesybite spread - Vegemite's attempt at expanding its brand once again. Cheesybite was chosen as the official name after a competition was held but when the product first hit the shelves it was jokingly named and released as 'iSnack 2.0' on the jars as part of Kraft's PR push of the new formula as well as to draw attention to the competition to name the new Vegemite.

The new formula combines Vegemite and Kraft cream cheese, spreads more easily and features a much less salty, as well as a milder taste than the original.

Handy use for Vegemite

Buy Vegemite in the US or worldwide on Amazon 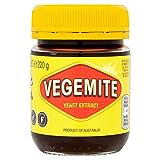