Alcohol Distillation and its Origins

Many races assert that they was the first to distill alcohol as a beverage, but it would appear that there is insufficient historical documentation to bestow the honour definitively on any one group. Distillation was neither a Greek nor a Roman invention and there is absolutely no evidence of any distillation in France before the 14th century.

Alcohol Distillation and the Moors

The Moors and distillation are almost synonymous with many believing that the Moors discovered its secrets around 900 AD, although they used the resultant alcohol for antiseptic and medicinal purposes rather than for imbibing. The Moors legacy lives on in today’s nomenclature: al-kohl whence alcohol and al-ambiqs anglicised to alembic.

On the other hand, monasteries in Ireland, oases of wisdom during the stagnation of the Dark ages, may also have a claim concerning alcohol distillation. Legend has it that King Henry II of England found spirits produced in Ireland, which would date their spirit production from the 12th century. Monks in Salerno were also involved in distillation around this time although in all likelihood they learnt the art from the Moors.

Another legend gives the honour of the invention of distillation to the Chinese with travelers bringing news of the methodology to Egypt, which subsequently spread as alchemy, derived from al-Khem.

The distillate became known generically as water of immortality because of the preservative effect it had on anything of an organic nature. this translated into many different languages and eventually evolved into names with which we are familiar today including uisge beatha from the Gaelic, whence whisky; eau de vie from French; aqua vitae from the Latin and interestingly el ixr from Old Roman. In English the expression became spiritual water and subsequently what we now refer to as spirits. 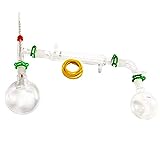 The alcoholic distillation apparatus, used to separate and concentrate the ethyl alcohol from a fermented liquid, works on the basis that ethyl alcohol, which possesses a boiling point of 78.3°C, is more volatile than water and so when a fermented wash is heated, the alcohol vapourises before the water. Through condensation, these alcoholic vapors are collected, while other vapours and solids are rejected.