How To Make Walnut Waffles

One of my favorite meals to collect recipes for is breakfast.  I love having options whenever we have company or we go on vacation somewhere.  I like being able to come up with something delicious with relatively little effort.

This recipe for walnut waffles falls into many categories - delicious, easy, perfect for company and unique for a special breakfast anytime!

I find that breakfast recipes are great for experimentation or in combination with other foods or recipes.  This recipe is no exception. I first tried it when my mother and my son came to visit, serving it with strawberries and whipped cream.  Then when my daughter and son-in-law came for a visit, I added more variations such as applesauce and fruit butters.

Whatever way you decide to make these waffles, even as a dinner waffle, I think you'll find them easy to make and fabulous so many ways. However, you'll also discover that they are very quick to make and wonderful to freeze! 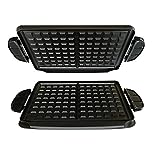 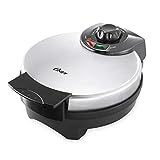 Makes 8 waffles (though depends on size of waffle iron)

Attribution: The original recipe is from the New Family Cookbook for People with Diabetes – alterations and suggestions by Audrey Kirchner

This recipe is the best yet for waffles! Over the years, I've tried several recipes for waffles that had beaten egg whites folded into the recipe. However, for some reason, this recipe holds up better than most and makes a deliciously light and crispy waffle, which is just how I like them.

I’m not sure why I thought adding walnuts to the batter would be a good idea but on one batch I tried it and now I’m sold! I loved the combination of the light and crispy waffle with a little bit of walnut crunch mixed in. It is yet another way to incorporate a bit of walnuts into your daily diet. Walnuts are one of the seven recommended foods we should eat every day.

Here are some great serving ideas:

If you're looking for a delicious recipe for waffles that is so absolutely simple, try this one. I’m sure you’ll love it as much as I do.  It is a great one for a special breakfast such as at the holidays or when you have guests, but it is also a great recipe 'just because' you feel like waffles!

I also tried different waffle irons for this recipe. I have a Belgian waffle iron, a flip-over waffle maker and a George Foreman grill with waffle plates.

I have to say that the problem for me with waffles when you have company is that you never seem to have everyone’s waffles ready at the same time along with the rest of the breakfast and rest of your ingredients.

My solution was to double my waffle recipe and then use at least 2 of my waffle makers to try and make more at a time.  However, the waffle iron I found the largest and thus better at getting more to the table at once was the George Foreman.  I could easily make several big waffles and then even have the 2 other waffle irons going at the same time.  I ended up with many more waffles in the same time as opposed to trying to make one at a time on the smaller irons.

As noted above, these waffles also freeze like a dream.  When you have finished cooking all the batter, let the waffles cool.  Simply pop them in freezer bags, label and keep in the freezer. When needed, pop the needed amount in the toaster.  They come out just as crisp and light as when you first made them - even if you've defrosted them in the fridge the night before. 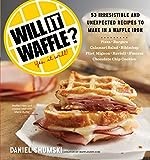 Will It Waffle?: 53 Irresistible and Unexpected Recipes to Make in a Waffle Iron
Buy Now

The New Family Cookbook for People with Diabetes
Buy Now