If you have kids you’ve surely seen the lovable minions from Despicable Me. These cute little minions are easy to replicate on a cupcake, but beware after you’ve decorated your cupcakes your kids might not want to eat them.

These cupcakes are so easy to decorate your kids are able to get involved. My 6 and 11 year old both helped make them. The 11 year old was able to make the whole cupcake, but the 6 year old did have difficulties with the details. 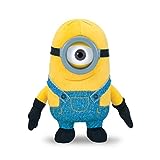 Start by frosting your cupcakes. You can use canned or homemade frosting. Use blue food coloring to dye the frosting. If you don’t want blue frosting, that’s fine. BUT minions do wear denim…so my kids were insistent that the frosting was blue.

Once the cupcakes are frosted, it’s time to make the minions. Start by cutting a Twinkie in half. A half of a Twinkie makes one minion. You will want to make the minion before putting him on the cupcake. TRUST ME, it’s much easier this way. Place the half of a Twinkie on plate. Then, take the candy you selected to use for eyes and put a circle of frosting on one side of it. We used white m&ms, but you could also use Smarties or Mentos. Not sure why but the flavor of those two did not seem appropriate for cupcakes, so we went for m&ms. Press the m&m with frosting on to the Twinkie. When you press down on it the frosting should seep out the edges and form the minion’s goggles. Then place a drop of black frosting in the center for the “eye ball”.

Will you make these easy to decorate cupcakes?

Now that the minion has eyes, add two lines of black frosting coming down each side of the Twinkie to represent the goggle straps. At this time you’ll also want to add a mouth with the black frosting. Smiles, frowns, surprised faces all work since minions have so many different facial expressions.

The final step in creating your minion is taking the chocolate jimmies and poking them into the top of the Twinkie for the minion’s hair. The longer jimmies work better for this.

Now your minion is ready to be placed on the cupcake. Just take him and put him on top of your cupcake and you have a beautifully decorated minion cupcake that was easy and fun to make.

Despicable Me 2 directors Chris Renaud and Pierre Coffrin were the voices of the minions.

After the success of both Despicable Me movies, the minions will get their own movie slated to come out in 2014.

The Twinkies will get stale fast on top of the cupcake. So, if you aren’t going to eat them right away, place them on a covered cake pan or something similar to help keep them fresh.

Minions usually have one or two eyes, but don’t be afraid to experiment. My kids loved their 5 and 3 eyed minions. We even make one girl minion. It had jimmies in the goggles that looked like girlie eyelashes.

Putting the frosting on the Twinkies can be difficult for smaller children and frustrating when they can’t get their minion to look the way they want. Let them place the jimmies in for the hair, press down the eye, and place the minion on the cupcake. It gives them a chance to help, and feel like they did it themselves.

If you can’t find Twinkies, you can also use Cloud Cakes. They are made by Little Debbie.