The Horseshoe Crab does not really look like crab at all. In fact it isn't, the only things it shares with the crab is its English name and the fact that it lives in the sea. In actuality the Horseshoe Crab is much more closely related to spiders and scorpions than it is to crabs.

The Hoseshoe Crab is a living fossil and has remained virtually unchanged for hundreds of millions of years.

Other common names given to the Horseshoe Crab are the Horsefoot Crab, the Helmet Crab, the Saucepan Crab and the King Crab.

Horseshoe Crab Laying on its Back 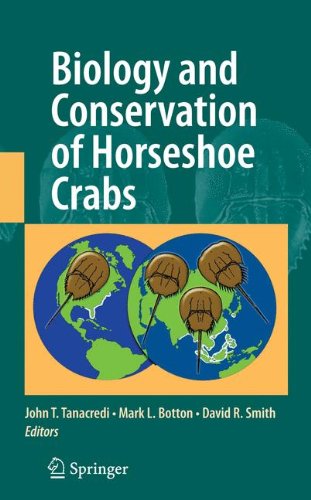 In Malaysia the Horseshoe Crab is looked upon as a delicacy and there are specialist restaurants where it is the main item on the menu.

The Roe is considered an aphrodisiac in parts of Asia and can command a high price. This has led to theft, poaching and over-harvesting to feed the market. Populations of the Horseshoe Crab have also plummeted due to taking large numbers to supply both the Eel and Whelk bait industries and for medical research. This in turn with onshore development and coastal disturbance is threatening the Horseshoe Crab with extinction.

As man overexploited cod fishing it became impossible to catch enough and so fishermen looked for alternative catches. One of those chosen was Conch. It was found that Horseshoe Crab made the best Conch bait and so once again the poor crab faced threats from another market.

Migrating shorebirds, in particular the Red Knot Calidris canutus whose population has plummeted, rely heavily on the Horseshoe Crab or its survival. The birds are likely to disappear before the crabs. The eggs of the Horseshoe Crabs are what ensure that they have to strength to carry out their migration journey north. Without this fuel they will surely die.

Eating Horseshoe Crab is a bit of an exagerration because there really isn't anything about this odd looking creature which is edible apart from the eggs or roe. There are several ways in which you may be presented with the roe.

The most basic is when the whole Horseshoe Crab is grilled and then presented to you on a plate. With it laid on its back you peel back the underside of the shell from the front and extract the roe with a spoon and eat it. The roe varies in colour from orange to green and has its own special sea-like taste with a not unpleasant rubbery texture. Some say that the green eggs are to be avoided whereas others will eat both. As the eggs of the Atlantic species are mainly green in colour it is hardly wise advice if you travel or consume imported foods.

As an alternative to grilling, the whole Horseshoe Crab can be slowly immersed into boiling water for around three minutes. After removal it should be allowed to cool before the roe is removed and washed. The roe can then be mixed into salads such as 'Yam Khai Maeng Da' or Som Tam to give them an extra bite.

Alternatively the roe can be removed after cooking and mixed with egg to make an interesting and somewhat crunchy omlette.

The proper cleaning of the roe of the Horseshoe Crab is extremely important. Though there is not much other 'flesh' what little there is is said to cause an unpleasant dizziness if consumed.

There have been numerous cases of poisoning after eating Horseshoe Crab eggs and several deaths in Thailand and Cambodia. This is attributed to the powerful neurotoxin, tetrodotoxin, the same as can be found in Fugu. There is now a test kit available which works along the lines of a pregnancy test kit to check for tetrodotoxin. It may well be that the neurotoxin only occurs at certain times of the year or, as has been suggested in research that it is only present in the Mangrove Horseshoe Crab Carcinoscorpius rotundicauda (South China Sea to the Indian subcontinent) and not in other Horseshoe Crab species.

Limulus polyphemus which is the only species to be found along the North American and Mexican Atlantic facing coasts.

Crabs on the Beach

Mankind Owes a Debt of Gratitude to the Horseshoe Crab

Although there may not be a great deal to eat on the Horseshoe Crab it is immensely important within the field of human medicine.

The crab has blue blood, it is extremely rich in copper. The blood has been found to clot almost immediately in the presence of certain toxins and bactria making it ideal for carrying out certain tests. There is nothing that works as well as Horseshoe Crab blood meaning that all humans owe a debt of gratitude to this strange creature.

Without the Horshoe Crab then testing to develop the human Flu Vaccine may well still be in the planning stage.

Studies done on the eyes of the Horseshoe Crab allowed rapid advances to be made in the study of human optics.

The chitin from the shells of Horseshoe Crabs is used in the manufacture of dressings for the treatment of burn patients. Some bandages have been shown to speed up healing time of injuries by up to fifty percent.

There is a Museum devoted to the Horseshoe Crab in Kasaoka, Japan.

From ages of antiquity
My strange looks a mystery
I come in the month of May
To the shores of the Delaware Bay
To spawn with eggs to lay.
Anglers, on my back they turn
Leaving me in the sun to burn.
If I had a voice I’d scream and wail
When they flip me by my tail.
But in silent death throes I lie
On the beach to slowly die.
Why are anglers so horribly cruel
Release or eat should be the rule
For millions of years I did thrive
But with acts like these will I survive?
For next Spring to again arrive?