White Castle and Other Fast Food Restaurants in Columbus, Ohio

Columbus, Ohio was once called the Fast Food Capital of the World by the Wall Street Journal, and no wonder, since there are many fast food places that are available throughout the city.

Even though we no longer have the dubious honor of being the Fast food Capital, we have many fast food restaurants here. While it would be impossible for me to list all of them in one article, I have provided a sampling of the biggest chains.

Speaking of sampling, Columbus is also a test market for a lot of food products and we provide a good market to represent the rest of the nation.

Quest to Eat at Every White Castle's Restaurant

Do you love it or hate it?

White Castle Restaurants are known for its small square hamburgers, known as sliders. The very thin meat patties have holes in them and are placed between really small buns, with pickles and onions. They have a unique taste that some people love, saying that it is great after a night of drinking. White Castles has developed a cult-like following among the people that love it. Others hate it, saying that it upsets their stomach and gives them gas.

The company also offers fish and chicken sandwiches that are the same size as the hamburgers. They sell their coffee at grocery stores as well as at the restaurants.

Founded in 1921, the company is generally known as the first fast food restaurant. Even though it was founded in Kansas, it has been headquartered in Columbus since 1934. It is a privately held company, and all of the restaurants are company owned. The restaurants are in limited areas of the United States.

Wendy's is an international fast food chain that was founded by Dave Thomas in Columbus in 1969. The original restaurant was downtown on East Broad Street, but it is no longer there. The headquarters was moved to Dublin, a Columbus suburb, in 2006. Its corporate history states that it had the first modern-day, drive-thru window.

According to Wikipedia, it is the third largest fast food chain, after McDonalds and Burger King. Most of the restaurants are franchised.

Their hamburgers, called Singles for one meat patty, are made to order, so you know that they are fresh, and you can choose exactly what items are put on your food.

If you are new to Ohio, and not just Columbus, you will also want to try Skyline Chili, which was founded in Cincinnati. Their chili has a special flavor that includes cinnamon. The chili is served on a bed of spaghetti and topped with a large layer of cheese. That's called a three way. You can also add beans and onions if you choose. They also sell coney dogs.

The fast food restaurants are listed here in alphabetical order, along with their most known item. Each one also offers a variety of other items on their menu. In preparing this list, sometimes it was difficult to discern which restaurants to include on the list. I left off restaurants like Max & Erma's and Bob Evans, because I perceive them more as sit down restaurants instead of fast food.

Columbus as a Test Market

Columbus has a large student population. Besides The Ohio State University, there are many other colleges and universities here. These students come from all over the states and the world. The city also has a diverse population, as people from many different ethnicities live here. Even though it isn't known for its tourism, since it is a capital of Ohio, many visitors come to see the Statehouse. The convention center and fairgrounds also draw in large crowds for big events. The airport and convenient location also makes it a great candidate as a test market. Even though it doesn't look like it geographically, Ohio is considered to be the Heart of the Midwest, a title it picked up in the 1800's.

Because of these demographics, Columbus tends to serve as a test market for many different things. Since we like to eat out, not only do we try out new restaurants, we also get to try out new product offerings at the restaurants.

There are focus groups in the area that allow us the opportunity to taste foods and test marketing before the product ever gets introduced to actual consumers. Then the products are often introduced to a limited market, and Columbus is often on that list. We get to try many of the products first. If we like them, they then get introduced to the rest of the states and the world. The link to the video on the right is a feature CBS news did about Columbus as a test market. 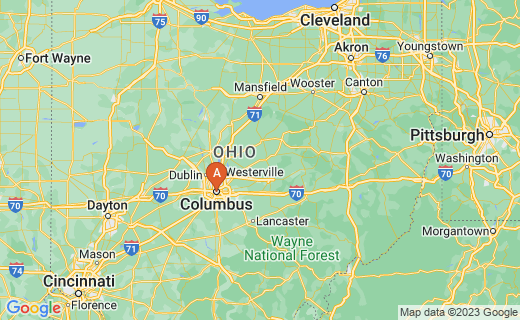 Who makes the best hamburgers?

Places to Eat in Columbus, Ohio

Columbus has a lot of fast food restaurants and colleges. It also has a lot of other attractions that make it an enjoyable to live, work, and visit. It serves as a test market for a lot of different products, and gets a lot of attention from presidential candidates.

Besides the fast food chains isted in this article, there are smaller fast food places, and many sit down dining establishments as well.

One thing I know for sure - if you come to Columbus, you won't go hungry!